$ 2,599 .00
Your Savings: $ 400 .00 Msrp: $ 2,999 .00
or $73/month for 36 months 0% interest for 36 months. 36 equal monthly payments required. Learn more
More On Order
This product is in high demand and we are shipping as many orders as we can. Place your order today to be included in the earliest possible shipment. Order now and we'll ship when in stock from one of our three fulfillment centers. 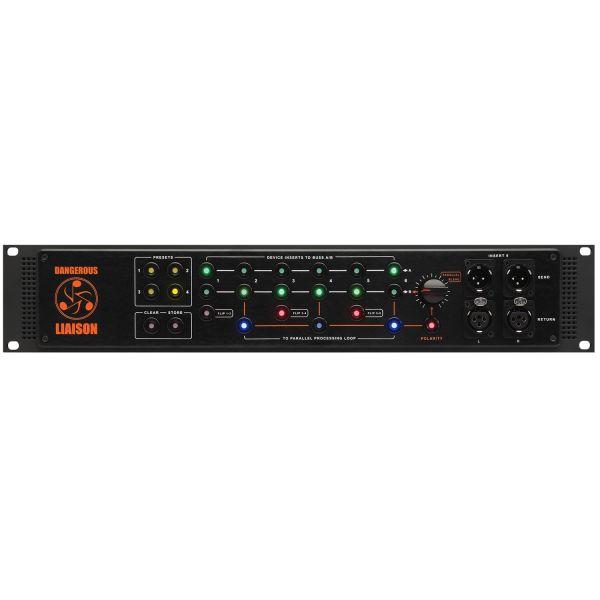 Instant recall is no longer just for digital. With the Dangerous Music LIAISON you can store and recall complex analog patches that include up to six stereo or mono analog paths. You’ll experience the ease and quickness of digital plug-ins with your analog rig! Want to try your favorite mix-buss chain on a piano track? Or quickly compare two analog EQs within that chain? – just push a button. With the onboard, latency-free, audiophile-grade parallel buss, you can blend your processed and unprocessed signals for rock solid parallel effects that otherwise require elaborate large format consoles and patchbays. Recall any of your stored patches instantly, bring individual patches in and out of the signal path for gapless A/B comparisons, get your studio setup for the day’s tracking, mixing or mastering tasks in a flash, and do away with confusing, time-consuming patch recall sheets – all while getting crystal clear sound from all your favorite gear.

Many of us don’t realize that when we’re making comparisons between two or more sounds, we’re relying on our short term memory. Research has shown that the length of time between exposure to two different sounds greatly determines our ability to make useful judgements. The shorter the gap, the more reliable our judgements are, and for tonal judgements, we start to lose discernment after just fractions of a second! In the analog environment we’re usually forced into physically repatching gear when comparing different sounds, causing gaps so big that the human brain simply can’t make much use of the comparison. With the LIAISON, you get to compare your analog patches with no gap, making A/B comparisons in the analog realm far easier – and actually useful. the LIAISON takes the guesswork out of your critical decisions, helping you make the most of your analog investments.

With the LIAISON, previously complex patches of analog equipment are made simple, and they can be instantly recalled with the sophisticated, yet elegant, signal routing and user interface.

Six Insert Loops – The topology of the LIAISON is built around six high-grade stereo insert loops, each of which can be switched in and out of the signal path at the touch of a button. Use the “Flip” switches to reverse the order of inserts 1&2, 3&4 or 5&6, allowing for immediate auditions of new routing possibilities (compress that EQ, or EQ that compressor?).

Two Main Busses – Two main stereo busses (A & B) allow you to route different analog gear chains simultaneously. For example, plug your mic pres into the input of Buss A and keep your favorite EQs and compressors ready for tracking while your favorite stereo mix buss processors live on Buss B. Or perhaps route your drum stems to Buss A, while simultaneously routing your entire stereo mix to Buss B. For even greater versatility, chain Buss A and B together!

Parallel Processing Loop – Send any combination of gear to the LIAISON’s onboard parallel processing loop, allowing latency-free blending of the processed and unprocessed signals. Parallel processing is standard practice today, but in the analog realm often requires a large format console and patchbay. With the LIAISON you can switch between in-series and parallel patches at the push of a button, and then blend to taste! Slam that buss-compressor and bleed in just a bit for sustain and edge. Put an extreme EQ curve on a vocal and blend it into the main signal to create urgency and articulation. Whatever you dream up, the LIAISON’s parallel buss will open up a whole new realm of creative uses for your analog gear. There’s even a polarity reversal button for the parallel processing loop, allowing you to correct phase or use phase cancellation creatively for various results.

Four Monitor Channels – Each of the two busses can be monitored before or after the insert loop, allowing you to hear the results of your inserted processing on either buss instantly. Intelligently routing these four monitor channels in your studio will open up all kinds of uses that minimize patching work and maximize your ability to make fast, reliable comparisons.

Programmability – Once you’ve got a patch you want to keep around, store it on one of the four program channels for instant recall. Thinking creatively, you can use the two busses to accomplish any number of elaborate patches for tracking, mixing and mastering that you can recall effortlessly.

At the core of the LIAISON is a set of no-compromise analog circuits developed by Dangerous's head designer, Chris Muth. Audiophile-grade components are used throughout the LIAISON’s 100% passive analog relay switching system, offering up a truly transparent and robust topology for seamlessly hosting all your outboard gear. True hard-wire bypass relays remove any gear entirely from the signal path, including analog units that lack an integrated bypass, or hard bypass, circuit. All of the LIAISON’s components switch instantly and silently, providing true A/B comparisons without coloration, latency or disruptive noises.

It seems ironic, but as digital audio continues to make leaps and bounds, we’re witnessing a simultaneous renaissance of analog gear. Now with the LIAISON, your analog gear can perform as nimbly as your digital plugins. the LIAISON brings the ease of programmable patches, hassle-free rerouting, plus the undeniable benefit of instant A/B comparisons, all in the analog environment. With the LIAISON you’ll unleash your creativity while keeping your studio primed for whatever tracking, mixing or mastering task comes your way.

Please fill out the form below and a Vintage King Audio Consultant will contact you with a ship date for the Dangerous Music LIAISON Signal Router/Switcher.

Have a better price in mind for the Dangerous Music LIAISON Signal Router/Switcher that you've been checking out? We're willing to work on it!Please fill out the form below with your contact information.Once the form is submitted, a Vintage King Audio Consultant will contact you as soon as possible with our best price on this product.

VIEW
18417
I would like to thank VK for the wonderful sales assistance, service and prices. This was my first purchase with you and it won't be my last. I only wish I'd discovered you years ago!
Matthew R.
I had two Grammy wins this year - Ray LaMontagne & Carolina Chocolate Drops. Both made with help from Vintage King!
Ryan F.
In almost 20 years in Pro audio buying, never did I receive a unit so well packed and exactly as described. Works flawlessly. The whole process has been so smooth. I will never hesitate to do business with you guys in the future and will recommend you to everyone I know.
Martin C.
This was my first experience buying something from Vintage King (although I surf the "used" categories on the website frequently!), and, despite being on the other side of the world, I had absolutely no trouble and everything went very smoothly.
Phil T.
The speed of delivery exceeded my expectations! I was VERY pleased that my shipment arrived in time for a scheduled vocal tracking session. The packing insured that my order arrived safely. And the sales staff responded quickly to questions regarding the product.
James P.
Thank you so much! Vintage King has been so fair and easy to work with. I can't thank you enough. It feels good to trust such a hefty purchase to folks who are so helpful and knowledgeable. Vintage King is a sound designers dream store.
Noa L.
You guys have excellent customer service and I am excited about the next upgrade I complete on my fifth recording facility. I've been in the studio business for forty plus years. The salesman I worked with at Vintage King was the best of the best. You all rock!
Robby T.
I would recommend Vintage King to any one looking for top-class gear, unbeatable customer service and the best prices on the map!
Jake D.
My experience with Vintage King was excellent. The order was here fast considering it was out of stock. The sales person had SKB send it to me directly and I couldn't have been more pleased.
Michael D.
From the minute I placed my order I was kept well-informed through each step in your process. Even though I was buying a comparatively modest piece of gear, your attention to detail made me feel like I was purchasing a six-figure mixing desk.
Thomas W.
I am a new customer of yours. You guys provided me the absolute best deals in ordering all the equipment to power my brand new recording studio. Your customer service is amazing and i will always deal with you from here on out.
Rob M.
Thanks for your great service and getting this out today. You guys really are the Kings!
Alan B.
Better than expected! Truly impeccable service. Your team was professional, knowledgeable, provided speedy delivery above and beyond standard. Vintage King Audio is definitely my go to for all of my audio and information needs.
James O.