How To Reamp Guitars In The Studio 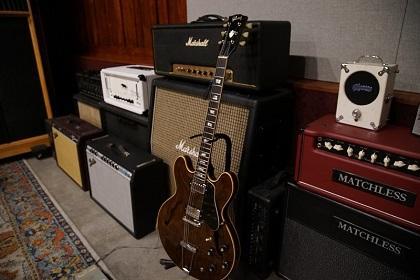 As one of the most popular techniques in modern recording, reamping allows engineers the flexibility to capture the best sounding guitar takes and send them through any amp or chain that they desire. This practice gives users the chance to experiment with different microphones, various settings on amplifiers, and unique pedal combinations without having to re-record another take.

Want to know the best part? It's pretty easy to do! In this blog, we'll be going over the basics of reamping and the gear that you'll need to get the job done right. So sit back, plug in, and let's talk about how to get pristine takes that you can do whatever you want with later.

For those intending to reamp guitars as part of their production, the first step is to capture as clean of a signal as possible on the way in. Plug your guitar or bass straight into a DI box and run the Thru input into an amplifier and the Out to your recording interface. By setting up this way, a guitarist will be able to play and react to an amplifier in real-time, while also capturing a completely clean signal.

Just about any DI box will do for the task, as long as they have the proper inputs and outputs previously mentioned. Radial Engineering specializes in DI boxes and has a number of best sellers including the J48 Direct Box, HDI, ProDI, and a Reamp Kit. Other favorites include the Rupert Neve Designs RNDI, BAE Audio PDI, Spectra 1964 BB-DI, A-Designs Audio REDDI, and Warm Audio Passive Direct Box.

Okay, so you’ve hit record, captured a direct take from the guitar player through the DI box, and it's gone through your interface into your DAW. Make sure that all of the guitar parts are played exactly as intended. Now it’s time to take that DI signal, send it out of your interface to an amp, and get the tone and character that the guitar is going to have at mixdown.

To do that, we need to set the output of the DI’s channel to one of your audio interface’s Line Outs. Now, keep in mind, a Line Level signal can cause problems running back into an amp at that level, depending on the source. This is where our reamp box comes into play.

A reamp box is a tool similar to a DI box, but it takes a Line Level source and converts it back to a Hi Impedance (Hi-Z) output. This ensures the signal will interface correctly with a guitar amp. Simply run the DI track through an output on the interface you’re using, connect the output to a reamp box, and run the reamp box into the amp you want to use.


A great reamp box is pretty easy to come by, and there are plenty of options whether you're working on a budget or have no budget. The classic Radial Engineering ProRMP will do the trick for sure, as will the Reamper JCR, X-Amp, and X-Amp 500 Series. The brand also has the EXTC-SA, which can be used for inserting pedals and effects. Another reamping option is the Little Labs Redeye 3D Phantom, which is a routing dream. It features both a DI and reamping box in one enclosure and also gives you the ability to listen through your whole chain.

Experimenting With Amps, Pedals And Microphones

So what’s next? The last step is exactly what you’d expect from a process called reamping. You will start miking up different amps, setting up pedals, and getting great sounds. One of the benefits of reamping your signals is that it gives us time as engineers to experiment with mic choices on the amplifier, all while being able to playback the same great take from the musician.

Try different microphones, see what sounds good with a particular guitar amp, and spend some time positioning the mics in various spots. As always, a classic Shure SM57 will sound good on a guitar amp, or you can reach for a combination of choices like a Sennheiser MD 42I paired with a Royer Labs R-121 ribbon microphone.

Another quick thing to note is that reamping gives you the flexibility to experiment with your favorite mic preamps as well. Finding the perfect combo of microphone and preamp is a lot easier when your guitar player isn’t waiting on you to start tracking!

With those steps covered, you’re ready to establish your own reamp rig and track guitars! You’ll find reamping can be a fun experiment and yield high-quality results. Have questions about reamping? Need help finding the right DI box for you? We got you covered! Please contact a Vintage King Audio Consultant via email or by phone at 866.644.0160.
Products in this Article
Categories: Guitar, Amps, Pedals
Tags: featured, How To, Warm Audio, Reamping, Reamp, Radial Engineering, Little Labs, Guitar, Bass & Amplifiers
Posted By: Nathan Doyle