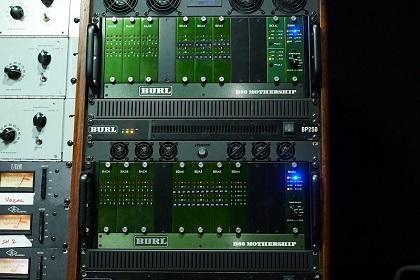 Being one of the most prestigious studios in the world, the bar is set incredibly high for the quality of gear utilized at EastWest Studios, especially for audio converters. When deciding what gear to bring into the studio, EastWest's manager Candace Stewart often looks to her clients as a source of inspiration.

"We find out what our clients want and we get it," says Candace. "I can't remember who introduced me to the BURL Audio converters, it might have been Dave Cobb (Chris Stapleton / Sturgill Simpson), but they said they needed new converters. The people wanted a better converter."

Enter BURL Audio and the B80 Mothership, the iconic chassis with green converter cards that were the clear choice for EastWest’s facilities. Candace began working with BURL's Rich Williams and Will Kahn and decided to install the converters in two of the control rooms at the iconic studio.

Since BURL is known for bringing analog warmth to the world of digital, these converters were the perfect fit alongside the classic consoles and outboard gear in these rooms. In Studio 2, EastWest is running two B80 Motherships with BAD8 and BDA8 daughter cards. Over in Studio 3, EastWest recently added an additional B80 Mothership for two total to keep up with the growing need for more hardware inserts.

"I think BURL has brought musicality back to the digital domain," says Lawrence Malchose, Chief Engineer at EastWest. "BURL does it on both ends, musicality on the input and realism on the output. It's invisible to the process unless you don't want it to be."

In our new Vintage King Workflow, we're going inside EastWest Studios to learn more about the decision to bring in BURL converters and find out the impact they have on the projects being recorded in Studio Two and Three.

If you're interested in purchasing BURL Audio gear or want to learn more about the brand's converters, we're here to help! Please contact a Vintage King Audio Consultant via email or by phone at 866.644.0160.