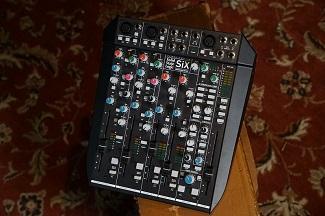 When it comes to recording and mixing consoles, Solid State Logic has always been looked to as one of the preeminent authorities on the matter. The brand's latest release, the SiX, distills down the elements that have made their desks industry standards and brings them into an innovative desktop mixer.

The sound of SSL has always been defined as "pristine." That's thanks in part to the SuperAnalogue™ technology used in their consoles, starting with the SL 9000J, all the way through the AWS and Duality series of today. Two of these SuperAnalogue™ mic pres are featured in the design of the SSL SiX, giving users access to console-grade technology in a small, portable package. Where the SiX slightly differs from other SSL gear is that each of the two SuperAnalogue™ channels features new EQ and compressor circuits. The new EQ is a two-band design that can be switched between shelf and bell curves with different center points for each curve.

The compressor is based on the classic SSL channel compressor, but it features a one-knob design and has program-dependent attack time, fixed release time and automatic gain make up. There are two more classic compressor elements onboard the SSL SiX desktop mixer. The legendary G Series Bus Compressor is present on the main outputs. making it easier than ever to glue together your mixes with that signature sound. SSL has also included the LMC+, the popular compressor created for talkback mic feedback that has been used to get extremely aggressive drum and vocal tones for years.

When it comes to inputs, the SSL SiX has a lot of options. There are the two aforementioned SuperAnalogue™ mic pres, in addition to two stereo line input channels with -10/+20 dB trim, balance controls and dedicated faders. The combination of two mic pres and two stereo inputs is how the SiX has gotten its name. The desktop mixer also features two stereo external inputs meaning that there are a total of 12 channels that can be summed via the main mix bus. We've covered a number of the main features on SSL's new desktop mixer, but let's get to what everyone to hear... The SiX in action!

Working together with Vintage King Audio Consultants Andy Catlin, Joe Dickinson, and Brandon Murphy, we've used the SiX in three distinct ways in the studio to showcase what it can do. Continue below to watch each demo and gain some insight from each session.

Recording A Singer/Songwriter With The Solid State Logic SiX

If you're interested in learning more about the Solid State Logic SiX or ordering one for your studio, please contact a Vintage King Audio Consultant via email or by phone at 866.644.0160.