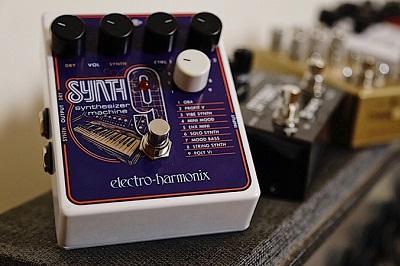 2017 has been a seminal year in effects pedals. Just when you thought designers couldn't top the creations of the past few decades, we saw them truly raise the bar in build quality, design and innovation.

Thankfully, I've been able to try nearly every pedal that came through the doors this year at Vintage King. While there were so many fantastic choices, I've whittled this list down to some of the true heavy hitters from the past year. Read on to see (and hear) my choices for the best pedals of 2017.

5. Strymon Sunset
This stackable, dual dirt box offers six takes on your favorite tone shaping pedals all under one roof. Full expression control over every parameter, a built-in noise gate and much more.

4. EHX Synth 9
Since the release of the B9 a few years back, I had always hoped for EHX to deliver a synth-inspired version within this groundbreaking keys-based series. Boy, did they deliver! The Synth 9 offers ethereal pads, sub-bass tones, portamento glides, sweeping filters and just about everything else to shape your guitar into a full-blown synthesizer.

It features two superlatively-voiced channels that each feature a fuzz, overdrive and boost circuit. It features different stacking options, the signature CBA drip switch grid and all the bells and whistles you could want. But most importantly it just sounds so damn good.

2. Meris Polymoon
A completely innovative take on the delay pedal. 1200 ms of clean digital delay at its core but with enough extended features to literally fall down the psychedelic rabbit hole and possibly never be the same again. Polymoon has a built-in flanger before the delay circuit and a phaser after the repeats. There are six different delay-taps to get your Binson Echorec on. A Swear control that washes out the repeats into a reverberated blur.

The Polymoon's Alt functions are what really put this pedal in a category of its own. The Hex modulation can be applied to the early and late repeats for some pitch shifting madness. Oh, and you have to experience this pedal stereo! This barely scratches the surface but trust me, just play one and fly blind. I can promise you will end up someplace both wonderful and strange.

The expression control on the Ottobit Jr. is key to really expanding on its best features. You can just control the filter rocking your foot back and forth or turn your six-step sequence into a 12-step sequence or sweep between major and minor scales. Sure, it’s excellent for chiptune and 8-bit bleeps and bloops but the sonic architecture of this pedal is so complex and musical. It really shines on any source.