Vintage King Marketplace Special Access
Your Resource for Exclusive
Pricing on the Best in Pro Audio You are logged in and shopping with special discount pricing
Limited-Time Special Financing – 0% for up to 36 months on our best brands using the Vintage King Credit Card. Split purchases into easy payments!
Best Seller 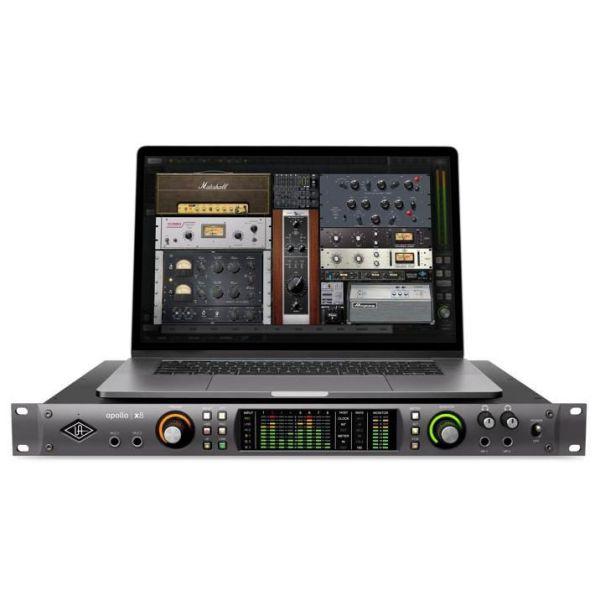 The Apollo x8 is the ideal tool for recording musicians, engineers and project studio owners, as you’re able to track and mix via an 18x24 (8x14 analog I/O) interface with four Unison-enable mic preamps and new HEXA core processing. Universal Audio has upped the ante power-wise as the HEXA core processing allows for 50% more DSP for running UAD plug-ins during each step of your workflow.

Packaged in a sleek rack mount unit with Thunderbolt 3 connectivity for Mac and PC, the Apollo x8 has additional improvements in conversion and monitoring. Universal Audio engineers have updated their converters for more pristine recordings and now offer up to 7.1 surround sound monitoring, an integrated monitor controller and built-in talkback mic.

Improved Conversion For The Apollo x8

In the time since the release of the Apollo MKII interfaces, Universal Audio engineers have been hard at work on improving the conversion capabilities for the launch of the Apollo X line. Ultimately, the design team paired together 24-bit/192 kHz converters with new analog circuitry to offer Apollo x8 users pristine sounds with 129 dB dynamic range and 128 dB THD+N.

The Apollo x8 offers more power than ever before with HEXA Core processing that utilizes six DSP chips. With 50% more DSP than previous generations of the interface, you’ll be able to take advantage of Universal Audio’s extensive UAD library and have a higher plug-in count when recording and mixing with the Apollo x8.

Universal Audio’s Unison Technology melds together plug-ins and analog in a way they’ve never been paired before. The Apollo x8 features four Unison-enabled mic pres, which allow music makers to track through mic pre emulations that match the actual input impedance, gain stage “sweet spots” and circuit behaviors of the gear they are based on. With legendary mic pre emulations from API, Manley, Neve, SSL and Universal Audio at the ready, you can bring the exact tone of so many classic records to next your next project.

Using Apollo interfaces in a professional recording studio has never been easier. The Apollo x8 features up to 7.1 surround monitoring for engineers, producers and musicians working in any type of studio setting. There is also a selectable +24 dBU option for working outside of the box and using the Apollo x8 in conjunction with recording consoles and analog outboard gear.

Universal Audio has been one of the leaders in creating plug-in emulations of classic gear since they first re-founded in 1999. When purchasing the Apollo x8, you gain instant access to the brand’s Realtime Analog Classics Plus Bundle, which features 16 world-class plug-ins. You’ll get Universal Audio staples like the featuring UA 610-B Tube Preamp (Legacy), UA 1176LN Limiting Amplifier (Legacy), Pultec EQP-1A EQ (Legacy), Fairchild 670 Compressor (Legacy), Marshall Plexi Classic, Ampeg SVT-VR and so much more.

HANDS DOWN NOW WITH LUNA FOR MAC,
THE BEST INTERFACE SYSTEM ON THE MARKET!!!

Best investment in my studio!!!!

Interface sounds absolutely amazing. Had much less issues now that I got this one. In love with this product!

Best service ever!!...I purchased it from Chile and Rob the sales man did and awesome post service unit registration...that was awesome!!!

Very good interface, if you are into the UAD platform, it is a purchase you will be pleased with.

A++ universal audio continues to lead in the evolution of digital technology!!!

I went from RME UFX FW and wasn’t sure I’d appreciate a real sound upgrade (I was moving on from FW and into thunderbolt/UAD plugs) and wow was I surprised! The sound I was used to was good but now it was DIMENSION!

I am very satisfied with the x8 Apollo interface. I record mostly jazz and folk groups and the occasional classic rock band. I used it to record a pair of mountain dulcimers when I got it. The mic pres are clean and sound good with the folk instruments (with 451s in xy). The best part is... it worked fine with my Win 10 TB3 laptop. And Vintage King allowed me to trade in my other interface and get a good price.

HUGE UPGRADE from my old TB silverface Apollo!
The new AD conversion and clock are helpful to help me get results that are way cleaner (though not sterile) and better depth (3d sound)... our other room has a Apogee Symphony 16x16 (first version) it used to crap on my old silverface, but now I feel they are very comparable!

I’ve been an Apollo user since the 1st generation silver Apollo Quad. and I love my new Apollo x 8
The converters sound way better. There’s a few great new features like alt speaker output and switch, and a talkback mic and switch. But what makes the Apollo series extra amazing is the UAD plugins, simply the best sounding plugins around! Thank you Universal audio for another amazing product...

I’ve had an Apollo quad for 5 years. Was wondering about an upgrade being worth it. With VK’s trade in program I took the plunge and I have to say I haven’t been happier. The converters are truely astounding. All my analog gear sounds new and I can’t stop playing and creating. I can load up on plugins without having to print to save DSP. Thank you UA and VK for breathing life back into my home studio!!!!!

Please fill out the form below and a Vintage King Audio Consultant will contact you with a ship date for the Universal Audio Apollo x8 18x24 Thunderbolt 3 Audio Recording Interface.

Have a better price in mind for the Universal Audio Apollo x8 18x24 Thunderbolt 3 Audio Recording Interface that you've been checking out? We're willing to work on it!Please fill out the form below with your contact information.Once the form is submitted, a Vintage King Audio Consultant will contact you as soon as possible with our best price on this product.

VIEW
104720
I would like to thank VK for the wonderful sales assistance, service and prices. This was my first purchase with you and it won't be my last. I only wish I'd discovered you years ago!
Matthew R.
I had two Grammy wins this year - Ray LaMontagne & Carolina Chocolate Drops. Both made with help from Vintage King!
Ryan F.
In almost 20 years in Pro audio buying, never did I receive a unit so well packed and exactly as described. Works flawlessly. The whole process has been so smooth. I will never hesitate to do business with you guys in the future and will recommend you to everyone I know.
Martin C.
This was my first experience buying something from Vintage King (although I surf the "used" categories on the website frequently!), and, despite being on the other side of the world, I had absolutely no trouble and everything went very smoothly.
Phil T.
The speed of delivery exceeded my expectations! I was VERY pleased that my shipment arrived in time for a scheduled vocal tracking session. The packing insured that my order arrived safely. And the sales staff responded quickly to questions regarding the product.
James P.
Thank you so much! Vintage King has been so fair and easy to work with. I can't thank you enough. It feels good to trust such a hefty purchase to folks who are so helpful and knowledgeable. Vintage King is a sound designers dream store.
Noa L.
You guys have excellent customer service and I am excited about the next upgrade I complete on my fifth recording facility. I've been in the studio business for forty plus years. The salesman I worked with at Vintage King was the best of the best. You all rock!
Robby T.
I would recommend Vintage King to any one looking for top-class gear, unbeatable customer service and the best prices on the map!
Jake D.
My experience with Vintage King was excellent. The order was here fast considering it was out of stock. The sales person had SKB send it to me directly and I couldn't have been more pleased.
Michael D.
From the minute I placed my order I was kept well-informed through each step in your process. Even though I was buying a comparatively modest piece of gear, your attention to detail made me feel like I was purchasing a six-figure mixing desk.
Thomas W.
I am a new customer of yours. You guys provided me the absolute best deals in ordering all the equipment to power my brand new recording studio. Your customer service is amazing and i will always deal with you from here on out.
Rob M.
Thanks for your great service and getting this out today. You guys really are the Kings!
Alan B.
Better than expected! Truly impeccable service. Your team was professional, knowledgeable, provided speedy delivery above and beyond standard. Vintage King Audio is definitely my go to for all of my audio and information needs.
James O.