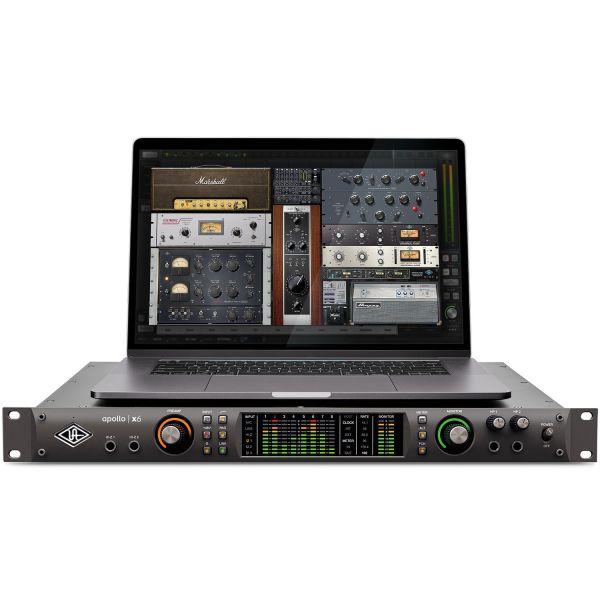 Universal Audio’s Apollo recording interface has enabled audio creators the world over to record and mix world-class compositions with greater ease than ever. The Apollo X is the next step in the impressive lineage of these interfaces and the Universal Audio Apollo x6 improves upon its predecessors with unparalleled conversion, processing and monitoring features.

Created with music producers and post-production facilities in mind, the Apollo x6 enables users to record, overdub and mix via a 16x22 (6x12 analog I/O) interface with two Unison-enabled mic preamps and new HEXA core processing. This improvement in processing power allows for 50% more DSP for running UAD plug-ins during each step of your creative process.

Packaged in a sleek rack mount unit with Thunderbolt 3 connectivity for Mac or PC, the Apollo x6 additionally offers improvements in conversion and monitoring. Once again, Universal Audio has updated their converters for more pristine recordings and now offers 5.1 surround sound monitoring, an integrated monitor controller and built-in talkback mic.

Improved Conversion For The Apollo x6

In the time since the release of the Apollo MKII interfaces, Universal Audio engineers have been hard at work on improving the conversion capabilities for the launch of the Apollo X line. Ultimately, the design team paired together 24-bit/192 kHz converters with new analog circuitry to offer Apollo x6 users pristine sounds with 129 dB dynamic range and 128 dB THD+N.

The Apollo x6 offers more power than ever before with HEXA Core processing that utilizes six DSP chips. With 50% more DSP than previous generations of the interface, you’ll be able to take advantage of Universal Audio’s incredible UAD library and have a higher plug-in count when recording and mixing with the Apollo x6.

Universal Audio’s Unison Technology melds together plug-ins and analog in a way they’ve never been paired before. The Apollo x6 features two Unison-enabled mic pres, which allow music makers to track through mic pre emulations that match the actual input impedance, gain stage “sweet spots” and circuit behaviors of the gear they are based on. With legendary mic pre emulations from API, Manley, Neve, SSL and Universal Audio at the ready, you can bring the exact tone of so many classic records to next your next project.

Using Apollo interfaces in a professional recording studio has never been easier. The Apollo x6 features 5.1 surround monitoring for creators working in the world of post-production, no matter whether it be for film, video games or television. There is also a selectable +24 dBU option for working outside of the box and using the Apollo x6 in conjunction with recording consoles and analog outboard gear.

Universal Audio has been one of the leaders in creating plug-in emulations of classic gear since they first re-founded in 1999. When purchasing the Apollo x6, you gain instant access to the brand’s Realtime Analog Classics Plus Bundle, which features 16 world-class plug-ins. You’ll get Universal Audio staples like the featuring UA 610-B Tube Preamp (Legacy), UA 1176LN Limiting Amplifier (Legacy), Pultec EQP-1A EQ (Legacy), Fairchild 670 Compressor (Legacy), Marshall Plexi Classic, Ampeg SVT-VR and so much more.

So far this Apollo X6 is working out great. Once you understand the internal routing, its capacities began to surface.

My only frustrations are with the onboard talkback mic button, and the internal talkback mic itself. If you need to have this unit in a rack, the only way you can access the talkback is via the virtual console talkback button. If monitor Realestate is already an issue, this isn't going to make things easier. As for the onboard talkback mic, it works alright, but only sounds decent if you are within 1 foot of the unit. I hope that at some point, UA figures out a way to get an external mic to route through (and replace) the onboard mic and its signal. Presently, I'm using an external mic plugged into the Mic/Line 1, sending it to an Aux in ProTools, and having to un-mute and mute to turn on/off my signal. This is a viable work around, however this method lacks the Dim function that the onboard talkback system utilizes (for the prevention of feedback and echos), which can be frustrating.

Everything else is great and is fitting my needs.

From Focusrite 18i20 to 6x, I can confidently say I went from UAD fanboy to loyal customer.

Monitoring sounds better, tracking is amazing, I think I’ll always be recommending UAD for everything now.

Just saying, I would even preorder lol.....

Please fill out the form below and a Vintage King Audio Consultant will contact you with a ship date for the Universal Audio Apollo x6 16x22 Thunderbolt 3 Audio Recording Interface.

Have a better price in mind for the Universal Audio Apollo x6 16x22 Thunderbolt 3 Audio Recording Interface that you've been checking out? We're willing to work on it!Please fill out the form below with your contact information.Once the form is submitted, a Vintage King Audio Consultant will contact you as soon as possible with our best price on this product.

VIEW
104719
I would like to thank VK for the wonderful sales assistance, service and prices. This was my first purchase with you and it won't be my last. I only wish I'd discovered you years ago!
Matthew R.
I had two Grammy wins this year - Ray LaMontagne & Carolina Chocolate Drops. Both made with help from Vintage King!
Ryan F.
In almost 20 years in Pro audio buying, never did I receive a unit so well packed and exactly as described. Works flawlessly. The whole process has been so smooth. I will never hesitate to do business with you guys in the future and will recommend you to everyone I know.
Martin C.
This was my first experience buying something from Vintage King (although I surf the "used" categories on the website frequently!), and, despite being on the other side of the world, I had absolutely no trouble and everything went very smoothly.
Phil T.
The speed of delivery exceeded my expectations! I was VERY pleased that my shipment arrived in time for a scheduled vocal tracking session. The packing insured that my order arrived safely. And the sales staff responded quickly to questions regarding the product.
James P.
Thank you so much! Vintage King has been so fair and easy to work with. I can't thank you enough. It feels good to trust such a hefty purchase to folks who are so helpful and knowledgeable. Vintage King is a sound designers dream store.
Noa L.
You guys have excellent customer service and I am excited about the next upgrade I complete on my fifth recording facility. I've been in the studio business for forty plus years. The salesman I worked with at Vintage King was the best of the best. You all rock!
Robby T.
I would recommend Vintage King to any one looking for top-class gear, unbeatable customer service and the best prices on the map!
Jake D.
My experience with Vintage King was excellent. The order was here fast considering it was out of stock. The sales person had SKB send it to me directly and I couldn't have been more pleased.
Michael D.
From the minute I placed my order I was kept well-informed through each step in your process. Even though I was buying a comparatively modest piece of gear, your attention to detail made me feel like I was purchasing a six-figure mixing desk.
Thomas W.
I am a new customer of yours. You guys provided me the absolute best deals in ordering all the equipment to power my brand new recording studio. Your customer service is amazing and i will always deal with you from here on out.
Rob M.
Thanks for your great service and getting this out today. You guys really are the Kings!
Alan B.
Better than expected! Truly impeccable service. Your team was professional, knowledgeable, provided speedy delivery above and beyond standard. Vintage King Audio is definitely my go to for all of my audio and information needs.
James O.