Most Advanced Desktop Interface for Mac and PC

Introducing the Apollo Twin MKII, the most advanced desktop interface on the market. The MKII is a fresh take on Universal Audio’s award-winning Apollo Twin series, which now offers more features and additional DSP for advanced workflow.

Whether you're working at home or in a professional recording facility, you can record up to 10 channels utilizing the two onboard Unison Preamps and ADAT Toslink Lightpipe connection. The Apollo Twin comes with three different levels of processing power (Apollo Twin Solo, Apollo Twin Duo, Apollo Twin Quad), which allow you to record and mix with the groundbreaking UAD-2 plug-in series at nearly zero latency.

Arm yourself with the same high-end conversion used by some of today’s top mix engineers on countless hit records. Universal Audio takes much pride in their converters, as they always trying to exceed the standards of clarity, depth and punch. The new converters on the Apollo Twin MKII have been redesigned for a wider dynamic range and the lowest THD to date, ensuring your mixes will have more excitement and power at every stage of the tracking and mixing process.

Universal Audio's Unison Technology is one of the strongest features offered by the Apollo Series. When engaging Unison Technology, the Apollo Twin will change the impedance, gain stage, sweet spots and component-level circuit behaviors to match the sound of some of the best preamps on the planet. Now you can record in real time with the sound of Neve, API, Universal Audio, Manely and SSL without having to break the bank.

This technology can also model some of the most sought-after guitar and bass amps from the last six decades including Fender 55’ Tweed Deluxe, Ampeg B15, Marshall Plexi, Fuchs ODS50, Engl E765 and more. Simply plug your cable into the front panel ¼” input of the Twin to turn your interface into a world-class amplifier. 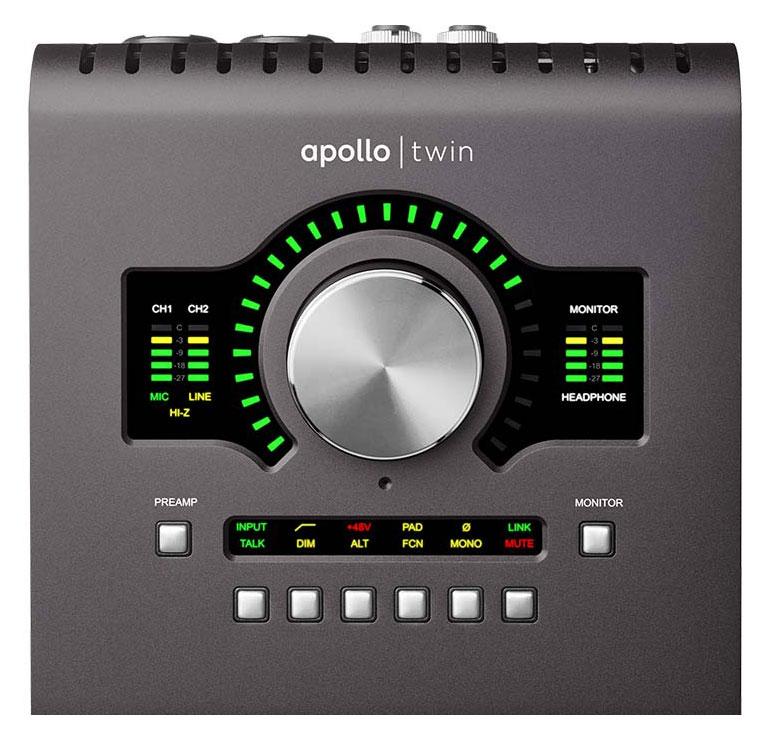 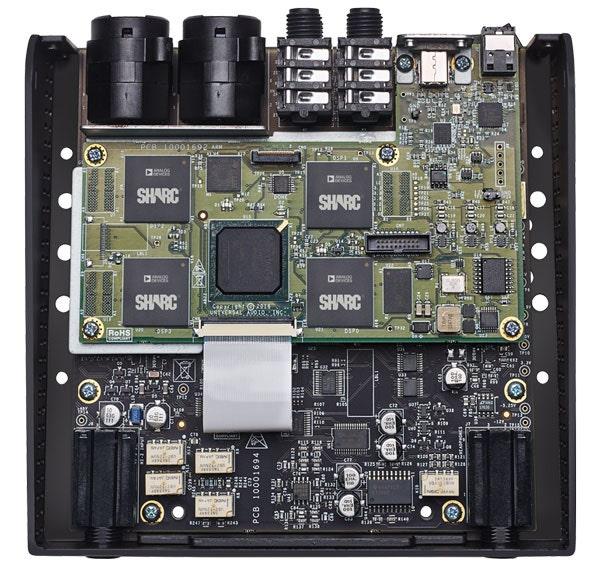 The onboard DSP of the Apollo Twin allows you to power and use UAD-2 plug-ins in real time while tracking and mixing. Now you can get the high quality sound of Neve, API, SSL, Universal Audio, Studer, Lexicon, Ocean Way Rooms, DBX, Empirical Labs, Fairchild, Pultec, Chandler, MAAG, Tube-Tech and many more. Even better, you’re not limited to one unit per mix, apply as many instances of the plug-ins as you have DSP available.

From the moment you begin using the Apollo Twin you have access to the Realtime Analog Classics plug-in bundle which includes some of the top UAD-2 plug-ins including the 610B Preamp and EQ by Universal Audio, Raw Distortion, Softube amp room modeling, LA-2A and 1176 compressors, Pultec EQs and more. Right out of the box you’ll be equipped with an unbelievable rack of gear. 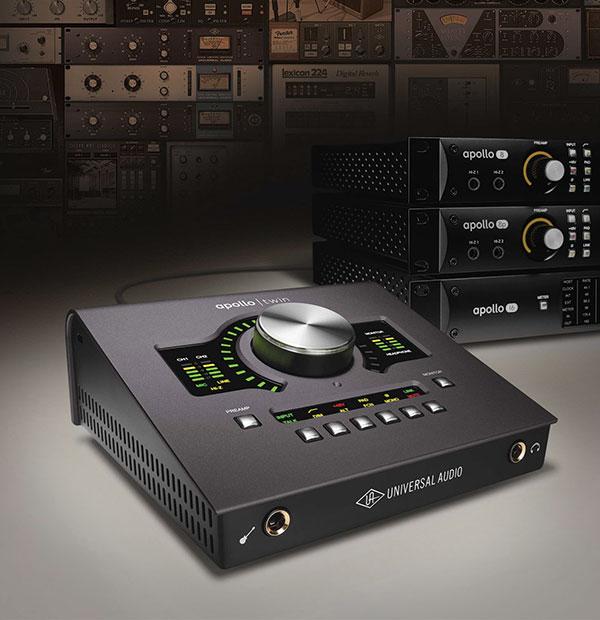 Another major improvement on the Apollo Twin MKII is in the monitor section, which now provides the ability to Mute, DIM, switch to Mono and select alternate speakers all on the interface itself. A talkback mic has been included for easy communication with the artist or recording slate cues for post-production, freeing up a preamp to be used for recording rather than talkback. These new features along with the improved conversion and DSP put the Apollo Twin in a league of its own, making it the most advanced and powerful desktop interface on the market.

Expand as your Studio Grows

Up to six Universal Audio Apollo interfaces can be linked together and controlled through their Console 2 software, allowing you to increase the number of I/O and DSP available for tracking and mixing. Even if you add a rackmount Apollo 8, Apollo 8P or Apollo 16, you can still use the Apollo Twin MKII’s onboard DSP and Unison Preamps as well as a desktop controller for your other Apollo interfaces. 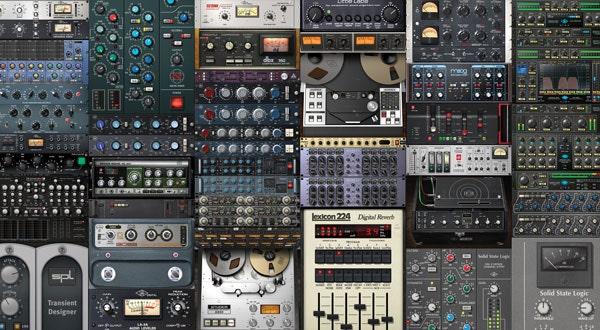 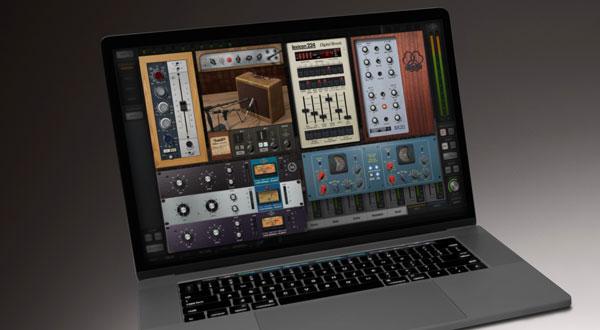 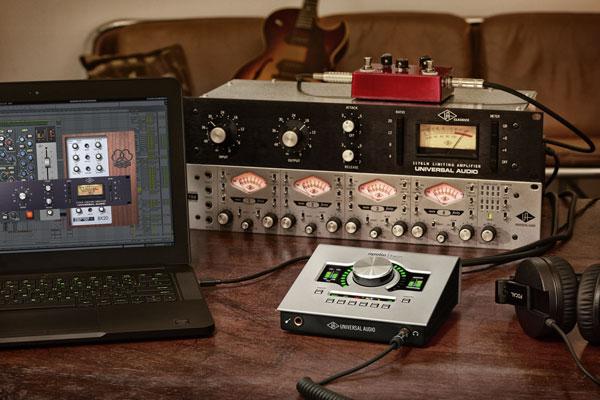 Universal Audio Apollo Twin MKII Models
Back to Top
I would like to thank VK for the wonderful sales assistance, service and prices. This was my first purchase with you and it won't be my last. I only wish I'd discovered you years ago!
Matthew R.
I had two Grammy wins this year - Ray LaMontagne & Carolina Chocolate Drops. Both made with help from Vintage King!
Ryan F.
In almost 20 years in Pro audio buying, never did I receive a unit so well packed and exactly as described. Works flawlessly. The whole process has been so smooth. I will never hesitate to do business with you guys in the future and will recommend you to everyone I know.
Martin C.
This was my first experience buying something from Vintage King (although I surf the "used" categories on the website frequently!), and, despite being on the other side of the world, I had absolutely no trouble and everything went very smoothly.
Phil T.
The speed of delivery exceeded my expectations! I was VERY pleased that my shipment arrived in time for a scheduled vocal tracking session. The packing insured that my order arrived safely. And the sales staff responded quickly to questions regarding the product.
James P.
Thank you so much! Vintage King has been so fair and easy to work with. I can't thank you enough. It feels good to trust such a hefty purchase to folks who are so helpful and knowledgeable. Vintage King is a sound designers dream store.
Noa L.
You guys have excellent customer service and I am excited about the next upgrade I complete on my fifth recording facility. I've been in the studio business for forty plus years. The salesman I worked with at Vintage King was the best of the best. You all rock!
Robby T.
I would recommend Vintage King to any one looking for top-class gear, unbeatable customer service and the best prices on the map!
Jake D.
My experience with Vintage King was excellent. The order was here fast considering it was out of stock. The sales person had SKB send it to me directly and I couldn't have been more pleased.
Michael D.
From the minute I placed my order I was kept well-informed through each step in your process. Even though I was buying a comparatively modest piece of gear, your attention to detail made me feel like I was purchasing a six-figure mixing desk.
Thomas W.
I am a new customer of yours. You guys provided me the absolute best deals in ordering all the equipment to power my brand new recording studio. Your customer service is amazing and i will always deal with you from here on out.
Rob M.
Thanks for your great service and getting this out today. You guys really are the Kings!
Alan B.
Better than expected! Truly impeccable service. Your team was professional, knowledgeable, provided speedy delivery above and beyond standard. Vintage King Audio is definitely my go to for all of my audio and information needs.
James O.