Vintage King Marketplace Special Access
Your Resource for Exclusive
Pricing on the Best in Pro Audio You are logged in and shopping with special discount pricing
September Savings | New Ways To Save For Fall 2021
New!

Multi-dimensional phaser pedal featuring a wide array of classic tones ranging from phasing to vibrato, while the six stage side provides phasing, flanging, chorus, and more 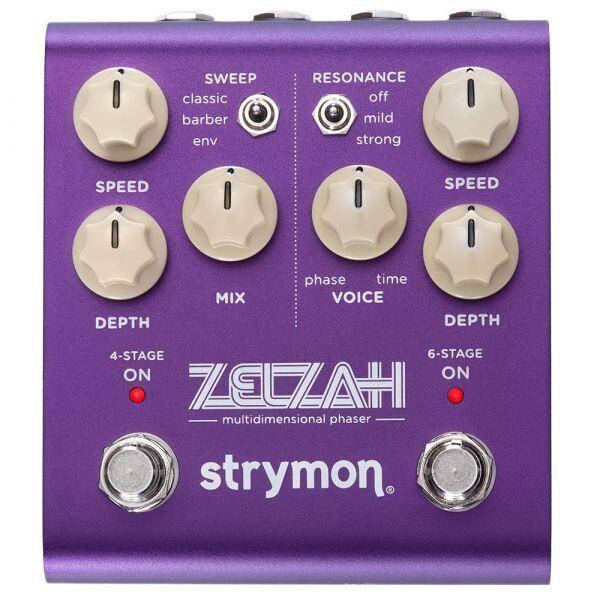 Step on the Strymon Zelzah, play one chord, and you’re instantly taken back to a world of classic phaser tones as they were always meant to sound, perfectly voiced, with tons of vibe and pristine audio quality. Vintage four stage and six stage phasing, vibrato, gorgeous flanging and chorus, and new sounds never heard before—all instantly musical with great tone all the way across every dial.

TWO EFFECTS AT ONCE

Zelzah’s four stage side gives you a wide array of classic tones ranging from phasing to vibrato, while the six stage side provides phasing, flanging, chorus, and more. Dial in a chorus on one side and barber pole phaser on other, or a phaser on one side and tremolo on the other. Use the two sides independently or together in a variety of configurations. Zelzah may become the only modulation pedal you keep on your board.

Each side of Zelzah is true stereo, meaning that under the hood each half of the pedal actually has two phasers running side by side (two four stage phasers and two six stage phasers). The LFO offset between the left and right phaser on each side of the pedal can be adjusted, opening up a world of possibilities for creating a huge stereo image with a single pedal.

The four stage side gives you a choice of three phase sweep types: Classic is a single LFO with a warped triangle shape for a familiar vintage sound. Barber can create a seemingly continuous upward or downward sweep, and Envelope allows the phase sweep to be dynamically controlled by your input signal.

The six stage sweep is carefully tuned, and behaves differently as you change Voice, Depth, and Speed settings. Dial in a slow Chorus and you are getting a true triangle wave sweep, but as you turn the Speed up, the LFO distorts and gets uneven for Leslie type sounds.

The Voice knob on the six stage side simultaneously controls over 30 different parameters, all working in harmony for an inspiring musical experience. Not only do you get thick, juicy, phasing with pure vintage vibe, but as you turn the Voice knob clockwise, our groundbreaking new modified all-pass structure expands the time response of the cascading all-pass filters seamlessly and continuously, adding spaciousness and airiness to the sound. Explore a range of fresh musical tones that are not merely a mix of phasing and flanging, but actually something entirely new. Turn the Voice knob further for luxurious true flanger effects, and continue to the far end of the range for lush vintage chorus sounds. There are inspiring musical sounds at every point along the dial, and so many ways to make a sound that is truly yours.

TWO PEDALS IN ONE

Strymon's goal was to capture the rich phasing sounds that were introduced in the 1970s that work so beautifully with electric guitar and electric piano. In addition to providing the best possible version of the vintage phaser sounds, Strymon also wanted to expand the sonic possibilities in a way that was unique and unexpected for a phaser. To do that, they developed an architecture that contains a modified all-pass filter as the basis for the 6 STAGE phaser. A phaser is a filtering effect made up of cascading all-pass filters. There are no delay lines. But with our modified all-pass structure, they are able to expand the time response of the all-pass seamlessly and continuously. On the four stage side, we wanted to provide the classic sounds you expect from a premium four stage phaser, while adding barber sweep and envelope controlled sweep, and a Depth control that is tuned to deliver great phasing sounds even at very shallow settings.

Please fill out the form below and a Vintage King Audio Consultant will contact you with a ship date for the Strymon Zelzah Multi-Dimensional Phaser Modulation Pedal.

Have a better price in mind for the Strymon Zelzah Multi-Dimensional Phaser Modulation Pedal that you've been checking out? We're willing to work on it!Please fill out the form below with your contact information.Once the form is submitted, a Vintage King Audio Consultant will contact you as soon as possible with our best price on this product.