$ 149 .00
Your Savings: $ 40 .00 Msrp: $ 189 .00
or $5/month for 36 months 0% interest for 36 months. 36 equal monthly payments required. Learn more
PayPal Credit, Express Checkout and Pay in 4 available.
In Stock - Fastest eDelivery 24/7!
This product is delivered by download. Once your order is complete, you will receive a license code via email within minutes. Note: Software is not returnable, so please call if you need advice about compatibility or version. 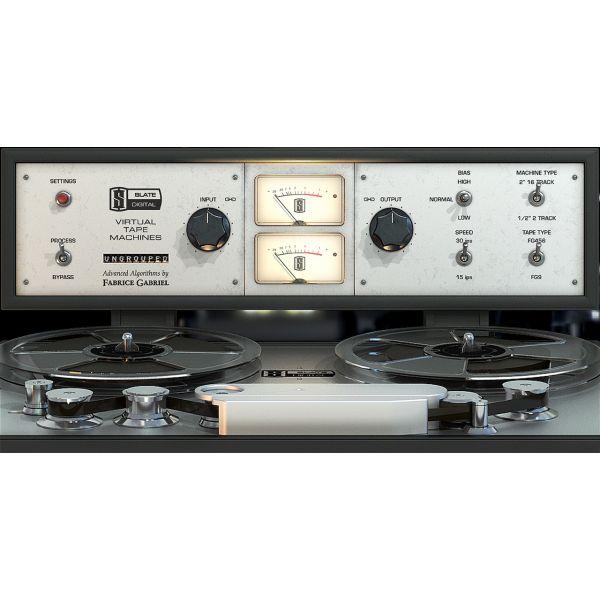 Analog Tape Machines have a SOUND

Digital recording is now the standard for professional music production. But many engineers and musicians long for the days of analog recording, and for good reason.

Big, fat, warm, deep, rich, and exciting are just some of the terms used to describe what recording onto a piece of magnetic tape sounds like. Most of all, tape is more musical.

To capture the sound of tape is to capture a living, breathing sound that dynamically reacts to the music going on to it. Slate Digital Chief Technology Officer Fabrice Gabriel utilized his electrical engineering degree as a foundation for his comprehensive study of the physical processes that occur when recording to analog tape through a tape machine. What began with science led to Fabrice’s discovery of the seemingly magical properties of tape and inspired him to create his most advanced, dynamic algorithms yet. Two industry-standard machines were precisely modeled. What followed was a year of critical listening and algorithm tweaking, with some help from the expert ears of Slate Digital CEO, Steven Slate.

The result is the Slate Digital VTM Virtual Tape Machines plug-in. With models of both a 2 inch 16 track from NRG Recording, and a ½ inch 2 track machine from Howie Weinberg Mastering, the VTM will give your mixes an absolutely authentic analog vibe that will take your mixes to the next level. With added dimension, fatness, depth, and warmth, you’ll wonder how you ever mixed without it!

Love how well this plug-in wounds… really brings back the vintage sound of a tape machine. Hands down, the best Tape Machine plugin I’ve ever used. Keep up the amazing job Slate Digital!!!!

Please fill out the form below and a Vintage King Audio Consultant will contact you with a ship date for the Slate Digital VTM Virtual Tape Machines - Electronic Delivery.

Have a better price in mind for the Slate Digital VTM Virtual Tape Machines - Electronic Delivery that you've been checking out? We're willing to work on it!Please fill out the form below with your contact information.Once the form is submitted, a Vintage King Audio Consultant will contact you as soon as possible with our best price on this product.