$ 5,571 .00
or $155/month for 36 months 0% interest for 36 months. 36 equal monthly payments required. Learn more
More On Order
This product is in high demand and we are shipping as many orders as we can. Place your order today to be included in the earliest possible shipment. Order now and we'll ship when in stock from one of our three fulfillment centers.

Mic pre, summing mixer and monitor section all in one
MFR# Equinox
Shop All Shadow Hills Industries
Skip to the end of the images gallery 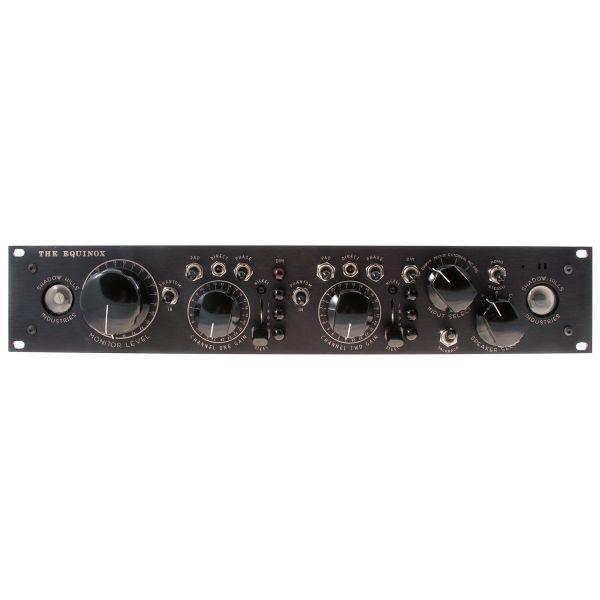 The Shadow Hills Equinox is like a complete small-format recording console in just 2 rack spaces. It features 2 GAMA mic preamps, 30 channels of analog summing, and a mastering-grade monitor controller.

Microphone Preamp
The mic preamps are the Golden Age Microphone Amps.  Each has 60dB of gain, 24 position gold-plated stepped attenuators, 48V Phantom Power, 20 dB Pad, Phase Reverse, and 1/4” DI Input. The most exciting feature of the amplifier section is the switchable output transformers, which allow for several different sonic flavors in the same box. The transformers and characteristics are as follows:

Summing Network
The summing buss is a 30-channel mixer utilizing copper buss bars and esoteric resistors, for simply the finest sounding passive summing.  DAW inputs 3-24 are STEREO summed and distributed odd to left and even to right, while DAW inputs 25-32 are sent MONO to both channels of the summing network. The summed signal then passes through the Golden Age amplifiers with selectable output transformers.  Effectively allowing the user to choose between the sounds of three different consoles on the mix bus.

With the INPUT SELECT switch IN:

With all these features in a rugged 2U enclosure the Shadow Hills Equinox is equipped for the demands of modern recording, but styled and crafted to the high standards of a bygone era.

Note: This unit requires the Shadow Hills PSU (not included).

The Equinox represents all that is right about Peter Reardon and his Shadow Hills Industries products. It's beautiful, it's functional, it's innovative, it's a throwback to another time that anticipates the needs of the future, and it's not cheap; but it's probably worth triple its price. The Equinox is a two-channel preamp; 32-channel summing buss; and master section complete with talkback mic, dim switch, mono/stereo switch, and outputs to three sets of monitors and your headphone amp; with a pair of green "magic-eye" VU meters; contained in a sturdy 2U-height steel case.

The first thing that people notice about Shadow Hills boxes is the use of black Bakelite-style knobs and glowing green filaments that scream contemporary Batcave... but the defining feature of Peter Reardon's work to date lies in the switchable output transformer settings. Each channel can be set to Nickel, Iron, or Steel. Steel is punchy, thick but bright, and is likely based on the vintage '70s API sound. Iron is essentially the St. Ives 1166 Neve hardware. And Nickel is softer and gooier and is based on a custom L.A. console. These three options not only are applicable on the two preamps going into your DAW but on the 32-channel summing buss coming out as well.

Therefore, you can route your digital signals out of your DAW and sum in the Equinox, switching the output transformer on your mix to emulate one of three heavy duty console textures; and remember, this is old-world hardware, not a digital simulation. The summing buss uses esoteric Holco metal film resistors (the same ones in Shadow Hills custom mastering consoles) located right next to the input transformersâ€” wiring at its finest, which is reflected in the clean, fat sound.

The Equinox feels and sounds as if you are working on an actual console. This is no minor thrill for those of us who built our skills on computer DAWs. The talkback mic/ dim feature in the master section will make communication with the performer far more convenient and professional.

The mic preamps have their own separate I/O, so you do not have to spend any time behind the unit changing cables when you are mixing versus when you are tracking. The Equinox comes with a separate 2U power supply. The required connectors and cords are not cheap to purchase and should be factored into the total cost. All 32 summing inputs along with the speaker outputs are D sub. The preamp cabling is balanced XLR of course. There are also balanced XLR inserts on the 2-buss which I use for external processing after summing.

On the front panel, the master section has input choices for DAW, internal summing buss, external 2-track, and the built-in mic preamps. This makes it possible to toggle between in-the-box DAW and Equinox-summed mixes. You also have monitor volume control, stepped gain knobs for the two preamp/summing channels, and the expected phantom power, polarity, and pad switches. Finally there is the speaker-select knob to choose one of three sets of speaker outputs, as well as a mono/stereo switch and talkback toggle.

The Equinox is so visually stunning and sturdy and has so many features that it is easy to overlook that the most inspiring and useful feature by far is the sound. Essentially two high-end mic preamps and hardware summing of the highest quality, this unit has improved my mixes immeasurably. As an early owner of one of the other summing boxes (I found it too transparent), I was skeptical of outboard summing, but the Shadow Hills Equinox has made me a believer.
Jim Roll, TapeOp

Please fill out the form below and a Vintage King Audio Consultant will contact you with a ship date for the Shadow Hills Industries The Equinox Microphone Preamp.

Have a better price in mind for the Shadow Hills Industries The Equinox Microphone Preamp that you've been checking out? We're willing to work on it!Please fill out the form below with your contact information.Once the form is submitted, a Vintage King Audio Consultant will contact you as soon as possible with our best price on this product.

VIEW
5720
I would like to thank VK for the wonderful sales assistance, service and prices. This was my first purchase with you and it won't be my last. I only wish I'd discovered you years ago!
Matthew R.
I had two Grammy wins this year - Ray LaMontagne & Carolina Chocolate Drops. Both made with help from Vintage King!
Ryan F.
In almost 20 years in Pro audio buying, never did I receive a unit so well packed and exactly as described. Works flawlessly. The whole process has been so smooth. I will never hesitate to do business with you guys in the future and will recommend you to everyone I know.
Martin C.
This was my first experience buying something from Vintage King (although I surf the "used" categories on the website frequently!), and, despite being on the other side of the world, I had absolutely no trouble and everything went very smoothly.
Phil T.
The speed of delivery exceeded my expectations! I was VERY pleased that my shipment arrived in time for a scheduled vocal tracking session. The packing insured that my order arrived safely. And the sales staff responded quickly to questions regarding the product.
James P.
Thank you so much! Vintage King has been so fair and easy to work with. I can't thank you enough. It feels good to trust such a hefty purchase to folks who are so helpful and knowledgeable. Vintage King is a sound designers dream store.
Noa L.
You guys have excellent customer service and I am excited about the next upgrade I complete on my fifth recording facility. I've been in the studio business for forty plus years. The salesman I worked with at Vintage King was the best of the best. You all rock!
Robby T.
I would recommend Vintage King to any one looking for top-class gear, unbeatable customer service and the best prices on the map!
Jake D.
My experience with Vintage King was excellent. The order was here fast considering it was out of stock. The sales person had SKB send it to me directly and I couldn't have been more pleased.
Michael D.
From the minute I placed my order I was kept well-informed through each step in your process. Even though I was buying a comparatively modest piece of gear, your attention to detail made me feel like I was purchasing a six-figure mixing desk.
Thomas W.
I am a new customer of yours. You guys provided me the absolute best deals in ordering all the equipment to power my brand new recording studio. Your customer service is amazing and i will always deal with you from here on out.
Rob M.
Thanks for your great service and getting this out today. You guys really are the Kings!
Alan B.
Better than expected! Truly impeccable service. Your team was professional, knowledgeable, provided speedy delivery above and beyond standard. Vintage King Audio is definitely my go to for all of my audio and information needs.
James O.