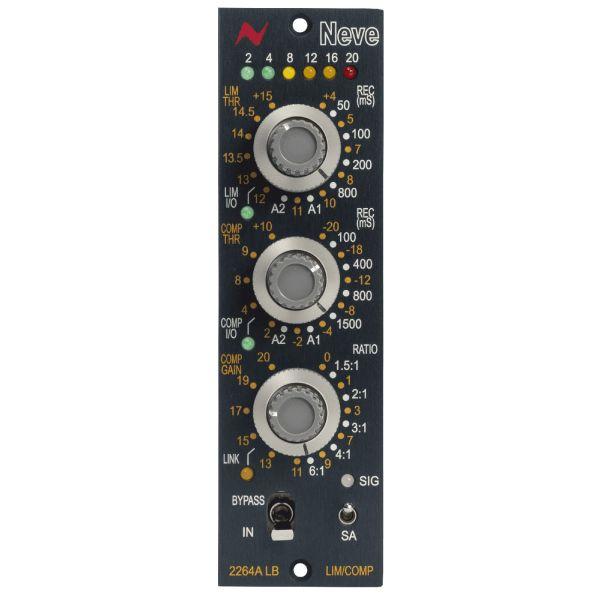 The Neve 2264ALB is a faithful recreation of the classic 2264A compressor/limiter in a compact 500-series module. With fully discrete Class A/B circuitry, three custom hand-wound transformers, and versatile new features like a slow attack setting, the 2264ALB is even better than the original.

The 2264A compressor/limiter has a long, rich history. Designed as an improved version of the 2254/R with an advanced circuit design and more precise response curves, the 2264A was an instant hit. Originally released in 1974, the 2264A compressor/limiter quickly earned a reputation for its warm, punchy sound. Equipped with a unique diode bridge compression circuit, the 2264A was also used as the design inspiration for the legendary 33609 stereo limiter/compressor. Still, decades later, 2264A units are highly sought after. Thankfully, you can capture the same incredible tone with the new Neve 2265ALB compressor/limiter.

Quickly shape and mold sounds using the intuitive interface. The top dial controls the limiter settings, including recovery time and threshold. Set release times as fast as 50 ms for aggressive peak limiting, or slow things down with times up to 800 ms for subtle stereo bus limiting. Glue your mix together with two dedicated auto release settings. Push-dial controls let you quickly bypass the limiter.

The bottom dial controls the compressor setting, in the same manner as the limiter. Dial in fast, punchy compression or give your tracks a slow, gentle squeeze with selectable record times from 100 ms - 1500 ms. Push and pump your transients in time with the tempo using two auto recovery settings. Toggle the compressor on and off using the push-dial controls.

The 2264ALB is capable of soft, subtle compression or hard-hitting transient reduction with a selectable ratio from 1.5:1 to 6:1. Set your make-up gain with the inner dial to properly A/B tracks before and after compression.

The original 2264A compressor/limiter had a fixed attack time of 3 ms, making it an excellent option for tracking or clamping down on dynamic drum performances. However, it wasn’t very useful when it came to subtle bus compression. With the new 2264ALB, AMS Neve has added a slow attack switch which changes the attack time to 12 ms.

I've just started using my 2264s and I'm very happy with them. It is well laid out and versatile. I bought it so i would have the Neve color for tracking and to help frame tracks during mixing. But it seems to be a much more powerful tool than I expected. On a basic level it gives tracks a presence that is subtle and normally elusive. Plus it just plain sounds good. I'm going to be trying them out on mix and submix busses next.

I find my latest 500 comp purchase on 2264 to my favorite comp in my rack. Adds Neve richness but still Fast and punchy. Killer on my drums, drum buss, bass and guitars. Really helps me place vocals and guitars on a recent mix right on top of the mix.

May be a bit pricey compared to some other 500 comps but blows most other 500 comp lims I've compared it to away. Compressor tightens things up nicely. Fast release is great on drum rooms. Limiter grabs but with little artifact like with most limiters. I'm grabbing a second one soon

Please fill out the form below and a Vintage King Audio Consultant will contact you with a ship date for the Neve 2264ALB 500 Series Compressor Limiter.

Have a better price in mind for the Neve 2264ALB 500 Series Compressor Limiter that you've been checking out? We're willing to work on it!Please fill out the form below with your contact information.Once the form is submitted, a Vintage King Audio Consultant will contact you as soon as possible with our best price on this product.