No interest if paid in full within 12 months Learn more
Ships directly from Meyer Sound
Note: This item may not be returnable or could require a restocking fee. Contact one of our Audio Consultants for more details. This item ships directly to you from the manufacturer. To ensure that the manufacturer currently has stock, please chat, call or email for the latest availability status.
+Add to List +Compare 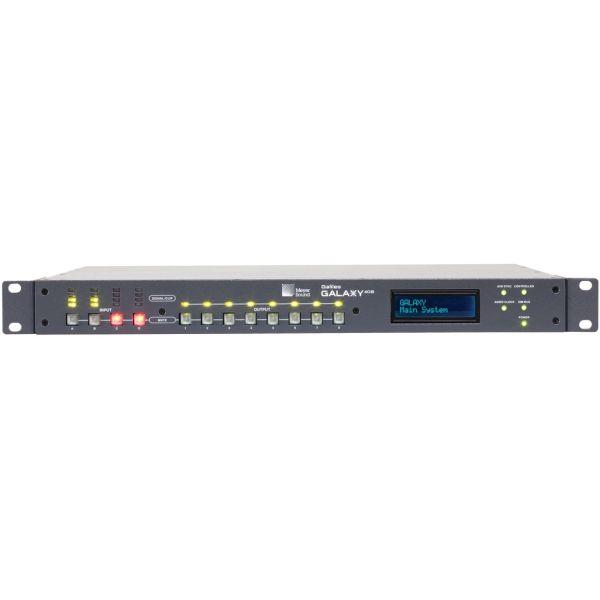 The Galileo GALAXY 408 Network Platform is an audio processing and loudspeaker management tool that offers comprehensive control of Meyer Sound loudspeaker systems. Leveraging opensource AVB technology along with powerful audio processing, GALAXY processors provide complete system management in one platform, making it an ideal choice for a full range of applications from touring to installs.

Users can control the GALAXY 408 processor using Compass Control Software (hosted on a Mac or PC) or via the Compass Go iPad App. Compass Control Software provides a complete toolkit for audio routing, system optimization, processing, and monitoring. Its Product Integration feature ensures the phase characteristics of different loudspeaker models are matched when they are combined in the same system, providing the most coherent summation possible.

Built-in summing and delay matrices allow users to easily assign gain and delay values at each routing cross point, enabling any single loudspeaker to serve as an output for multiple, independently processed input signals. The rear panel includes one SIM bus port for direct connection to Meyer Sound’s SIM audio analyzer, allowing the GALAXY 408 processor to function as a line switcher for the analyzer. With this capability, users can take measurements from any selection of GALAXY 408 processor inputs and outputs without patching beyond a single connection to SIM.

Please fill out the form below and a Vintage King Audio Consultant will contact you with a ship date for the Meyer Sound Galileo GALAXY 408 Network Platform.

Have a better price in mind for the Meyer Sound Galileo GALAXY 408 Network Platform that you've been checking out? We're willing to work on it!Please fill out the form below with your contact information.Once the form is submitted, a Vintage King Audio Consultant will contact you as soon as possible with our best price on this product.