$ 6,458 .00
Your Savings: $ 142 .00 Msrp: $ 6,600 .00
No interest if paid in full within 12 months Learn more
PayPal Credit, Express Checkout and Pay in 4 available.
Ships directly from Mercury
Note: This item may not be returnable or could require a restocking fee. Contact one of our Audio Consultants for more details. This item ships directly to you from the manufacturer. To ensure that the manufacturer currently has stock, please chat, call or email for the latest availability status. 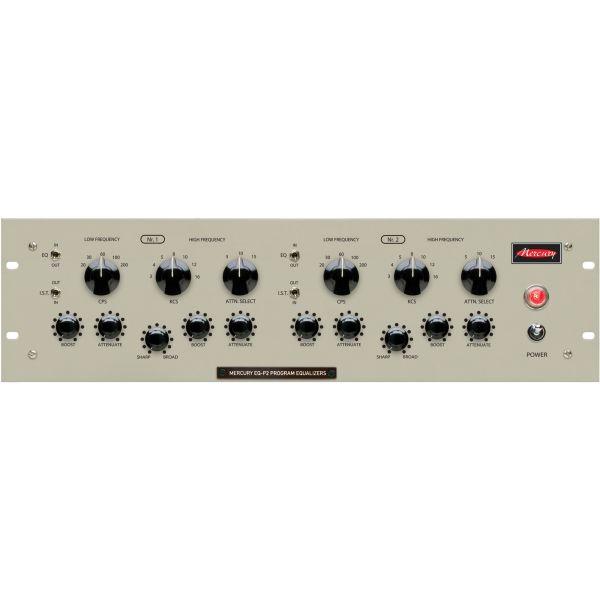 The Mercury EQ-P2 is two independent (dual mono) channels of the popular Mono, Mercury EQ-P1 Studio Program Equalizer in a 3u package. Mercury EQ-P2 is based on the vintage Pultec EQP1a circuit. The Mercury EQ-P2 has a passive EQ circuit with a fully balanced (push-pull) gain make up amplifier. This new Mercury production utilizes only the highest quality passive components, while remaining true to the original classic and like all Mercury products has transformer balanced input and outputs. Besides a much more powerful and stable power supply and running DC on the heaters, rather than AC, an additional frequencies to expand and make it more flexible, only other modernization is one of Mercury EQP2’s most popular features, the Mercury I.S.T. Switch.

The Mercury EQ-P2 has transformer balanced input and output, a passive EQ circuit and with a fully balanced (push-pull) gain make up amplifier. The new Mercury production utilizes only the highest quality passive components, while remaining true to the original production. Besides a much more powerful and stable power supply and running DC on the heaters, rather than AC, only other modernization is one of MercuryEQ-P2’s best features, the Mercury I.S.T. Switch.

The Mercury I.S.T. switch offers the choice to switch the Interstage Transformer in or out of the circuit. Giving engineers a choice with a flick of a switch between the standard Mercury warm, musical, “vintage” tone with the I.S.T. Switch not engaged (out) or a much more open and airy version of the same full, warm tone with the switch engaged (in). In the original Pultec EQP the Interstage transformer was always in the signal path. With the I.S.T. switch engaged and the interstage transformer not in the circuit, there is slight widening of the sound and slightly more open top end. Many of today's engineers value this feature on the Mercury EQ-P1 and now the Mercury EQ-P2 Studio Program Equalizers to have choice between two great, but different sounds without changing their frequencies or setting and hearing the change instantly. Note: With the IST engaged or not, the input and output transformers are always in the circuit.

The Mercury EQ-H1, EQ-P1, EQ-H2 and EQ-P2 are based on the original Pultec equalizers which were tools developed to deal with the limitations of recorded music, limitations that most often manifest themselves in the highest and lowest frequencies of the program material. The Mercury Studio Program Equalizers, like the family of original Pultec EQs, are originally designed to bring back the life and musicality lost in a recording. Whether by accident or genius, nothing has been able to do this better in music production than a passive equalizer with tube gain make up amplifier (‘Pultec style’) equalizer. The interaction of the passive boosting and attenuating shelving EQs (not relying on negative feedback), as well as the transformers, tubes and other amplification circuitry all add to the incredibly musical character of the product. Working engineers try other types of equalizers, but always end up coming back to the Pultec style as the equalizer of choice for those final touches while tracking or mixing and even mastering at times.

EQ-H2 vs EQ-P2
Simply, the key to the tone of these two circuits is it’s amplifier, and Mercury EQ-H2 and EQ-P2 have different amplifiers to make up the gain lost by the passive equalizer circuit, thus it has a different tone, meaning the EQ-H2 and EQ-P2 sound different on the same application, and have a different reaction to the same instrumentation or voice.

The EQ-H2, like the mono version EQ-H1, is more punchy and robust and has a slight push in the low end and lower midrange. The EQ-P2, like the mono version EQ-P1, is more open and silky, and equally adds warmth to highs, mids and lows of your source. Although both sound amazing on any application and are both multi-purpose tools (equalizers) in the studio, if you had both you could then choose between applications.

Please fill out the form below and a Vintage King Audio Consultant will contact you with a ship date for the Mercury EQ-P2 Dual-Mono Tube Equalizer.

Have a better price in mind for the Mercury EQ-P2 Dual-Mono Tube Equalizer that you've been checking out? We're willing to work on it!Please fill out the form below with your contact information.Once the form is submitted, a Vintage King Audio Consultant will contact you as soon as possible with our best price on this product.