$ 848 .00
Your Savings: $ 271 .00 Msrp: $ 1,119 .00
No interest if paid in full within 18 months Learn more
Ships directly from Mercury
Note: This item may not be returnable or could require a restocking fee. Contact one of our Audio Consultants for more details. This item ships directly to you from the manufacturer. To ensure that the manufacturer currently has stock, please chat, call or email for the latest availability status.

500 Series version of the original American, modular, transistor type preamplifier built in the 1960s
MFR# AM16D
Shop All Mercury
Skip to the end of the images gallery 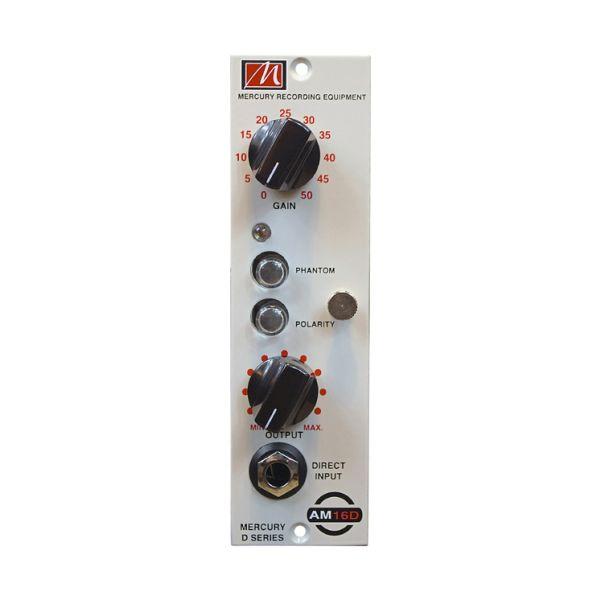 The Mercury AM16D is a D Series / 500 Series version of the original American, modular, transistor type preamplifier built in the 1960s. The AM16 is well known for being very musical overall, open and airy on the top end and having a tube-like "air" characteristic not found in most amplifiers of the same type.

Mercury worked with many of the vintage AM16 modules in the past. At Marquette Audio Labs, they have been racking and modifying modules since 1994 and the ‘vintage Langevin’ AM16 has always been a favorite. They have always had continuous great feedback from clients about the musical characteristics of the AM16. But the original modules have not been made for some 30+ years and supply is not able to meet demand. The Mercury AM16D solves that problem with the same fully discrete, "transistor type" circuitry and more importantly the same musical quality and performance of the original modules.

The original AM16 Amplifier literature stated: "The AM16 is primarily a microphone pre-mixing amplifier (mic pre). However, its performance also qualifies it for use as a post-mixing (booster) and as a low-level program amplifier. Of special note is the low noise generation figure."

Mercury Recording Equipment has achieved their goal with the Mercury AM16D: to make it possible to use the amplifier to its original, full potential. The Mercury AM16D can be used as a microphone amplifier (mic pre) and you can also use it as a line amplifier (booster) by using the Input Gain and Output Fader controls, Note: You can set at 0dB to accept Line Level inputs and or increase gain and turn down Output for ‘musical break up.’ You can use it to warm up tracks or as a front end of your G8 Sum-It Mixer. The Direct Input on the Mercury AM16D was designed for direct recording of bass and electric guitar as well as keyboards and drum machines, etc... The Mercury FDI Direct Input on the Mercury AM16 is very full sounding. There is more mid range and low end presence than most DIs as well as an open and airy top end that the AM16 is famous for.

Please fill out the form below and a Vintage King Audio Consultant will contact you with a ship date for the Mercury D Series AM16D Studio Microphone Amplifier.

Have a better price in mind for the Mercury D Series AM16D Studio Microphone Amplifier that you've been checking out? We're willing to work on it!Please fill out the form below with your contact information.Once the form is submitted, a Vintage King Audio Consultant will contact you as soon as possible with our best price on this product.