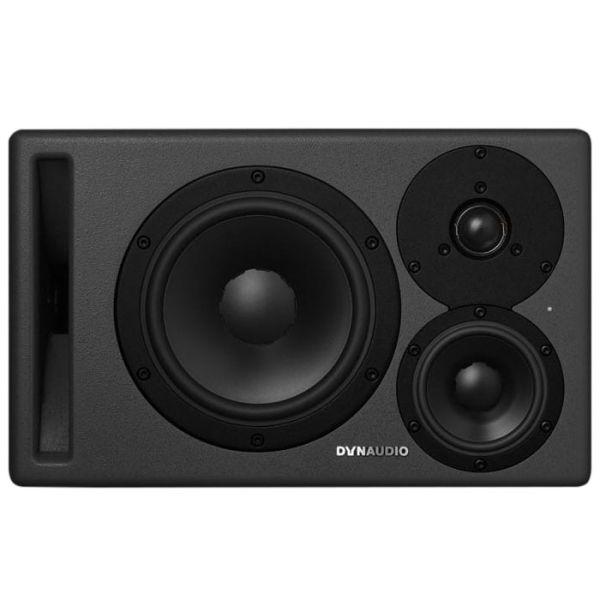 The Dynaudio Core 47 is the mid-size model of Dynaudio's flagship professional reference monitor series. Dynaudio engineers codenamed it ‘Bulldog’. You’ll know why when you fire it up.

This compact three-way monitor features an eyebrow-raising 500 W + 500 W + 150 W of Class D power from Pascal amplification, as well as sophisticated digital signal processing and a flat bass response down to 44 Hz at -3 dB, and 37 Hz at -6 dB with a gentle roll-off. And it reaches all the way up to 31 kHz – never let it be said monitoring can’t give you a real high.

The 4-inch midrange driver provides staggering detail. It uses Dynaudio's proprietary MSP (Magnesium Silicate Polymer) material in its one-piece cone for the perfect balance of lightness, stiffness and damping. That, coupled with an aluminum voice-coil and neodymium magnet system, means an incredibly fast response and authoritative control. With crossover points at 475 Hz and 5.25 kHz, Core 47 delivers so much more of the critical vocal range in one driver than typical designs, ensuring your mix decisions on vocal balances and dialogue subtleties are made with confidence.

Under the hood: brains as well as brawn

Dynaudio have given Core 47 the power to optimize itself for differing acoustic environments. There are three settings: Anechoic, for when the monitors are placed on stands in rooms that have sufficient dampening treatment (such as recording studios and dubbing stages); Desk, for when they’re on a workstation or meter bridge; and Soffit, for when they’re mounted in properly designed wall soffits as part of an overall architectural acoustic design. And that’s not all: you can also set boundary filters that compensate for walls or corners where low-frequency room modes can be triggered.

Input sensitivity tailored to your studio

The noise-floor and signal resolution of any monitoring system is critical to its performance. Whether you’re using the analog or digital inputs, you need to be able to control the gain staging between the monitor controller and the speaker system. Dynaudio provided a range of 0 dBu to +24 dBu to match the input sensitivity to the output level. Once optimized, Core 47 processes all analog signals at a 192 kHz sampling rate for the greatest degree of mathematical precision from the advanced DSP processor.

When using the AES digital inputs, there are two settings: one to determine which channel (L or R) of the AES stream is used for that monitor, and a second to determine the maximum output SPL. If you want maximum output SPL, set this to 112 dB (124 dB peak for a pair half space). If you work mostly at lower levels, choose a lower SPL setting to optimize the bit resolution of the AES input for the best linearity.

When using the AES input, Core 47’s DSP operates at the incoming sample rate and either locks to the AES clock or incoming word clock to maintain the most accurate signal possible. That means if you work in 48K, for example, you can send the signal straight to your speakers in 48K. It’s as simple as that. Unlike other competitors there is no sample-rate conversion. You give it 192, it does 192.

Designed for every type of studio

I replaced my Dynaudio BM-15s after 18 years of solid use and was a bit concerned these would not sound as big or get as loud. I was pleasantly surprised, if not SHOCKED at how huge these monitors sound, especially considering their size. The level of detail and accuracy was miles better than my old BM-15s and it almost felt like I added a sub. It is incredibly easy to mix on these speakers. There was literally no "get acquainted" period. Do not be deceived by their size...these are fully professional monitors in every sense. Highly recommended.

Please fill out the form below and a Vintage King Audio Consultant will contact you with a ship date for the Dynaudio Core 47 3-way Active Monitor - Right, Single.

Have a better price in mind for the Dynaudio Core 47 3-way Active Monitor - Right, Single that you've been checking out? We're willing to work on it!Please fill out the form below with your contact information.Once the form is submitted, a Vintage King Audio Consultant will contact you as soon as possible with our best price on this product.