$ 3,499 .00
Your Savings: $ 700 .00 Msrp: $ 4,199 .00
or $73/month for 48 months 0% interest for 48 months. 48 equal monthly payments required. Learn more
Special Order
Note: This item may not be returnable or could require a restocking fee. Contact one of our Audio Consultants for more details. Due to the special nature of this item, we order each unit fresh from the factory, exclusively for you! Lead times may vary so please chat, call or email for up-to-date inventory status. 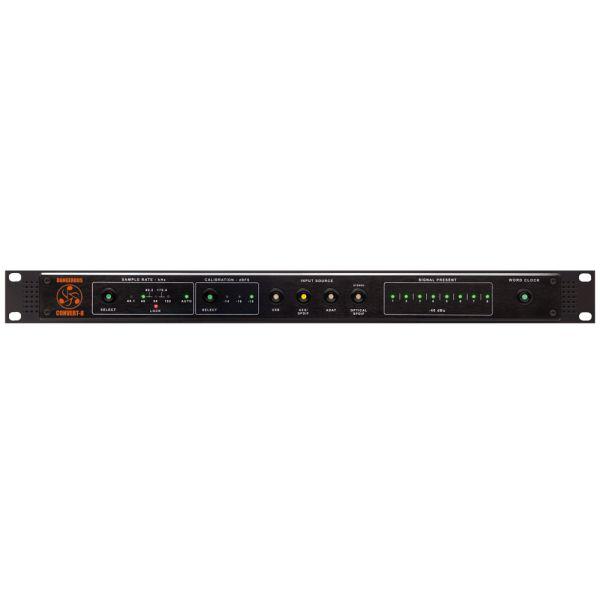 Whether you’re tracking, mixing or mastering, the Dangerous Music CONVERT-8 will deliver powerful low-end, articulate mids and transcendent highs to every channel in your analog rig. Patched into the award-winning analog summing units like the 2-BUS+ or the D-BOX+ (or to your favorite analog console) the CONVERT-8 will empower you to create the spacious, three-dimensional soundscapes that only real analog summing can deliver. Compatible with today’s digital signals (including the ubiquitous ADAT format) the CONVERT-8 is ready to take on any mixing or monitoring job from standard stereo and 2.1 to 5.1 and the increasingly popular Atmos format. Recognizing the needs of those who don’t need more analog inputs, the CONVERT-8 brings today’s very best digital-to-analog conversion within reach of any studio.

Dangerous has been building award-winning, standard-setting converters since 2002 when the Dangerous Monitor’s onboard digital-to-analog converter swiftly became the industry reference. They have been asked over the years to build a stand alone DAC, and they’re finally here in the CONVERT series. Eager to embrace the opportunity to develop a new and better DAC, we designed the CONVERT-8 from the ground up, utilizing cutting-edge digital technology coupled to a Chris Muth designed analog circuit that delivers Dangerous's signature sound: open, articulate and powerful from top to bottom. As a dedicated digital-to-analog converter, The CONVERT-8 has been optimized for the job of delivering stunning sound when mixing, mastering and monitoring while tracking. The CONVERT-8 goes beyond transparency: you won’t just hear everything, you’ll hear it beautifully.

IT’S ALL ABOUT IMPLEMENTATION

While in theory most converters should be the same, among those who truly understand this hotly debated and endlessly researched area of audio technology, the mantra is implementation, implementation, implementation. How a converter’s components are selected, tweaked and assembled according to a specific design, and then tuned for superior performance within that plan is what sets a converter apart – for better or worse. The Dangerous CONVERT-8 has been developed by a team of experts with deep, up-to-the-minute knowledge of digital and analog converter technology.

FINE TUNING THE ANALOG SIDE

A legend among mixing and mastering engineers for decades, Chris Muth has designed the analog gear used to mix and master an endless list of hit records and classic reissues. Chris’s powerful, articulate, hi-fi designs dominated the big studios in New York City since the 1980s, and via Dangerous his designs have become essential components in the best modern mixing and mastering DAW-based studios. When we set out to develop a new dedicated stereo D-A converter, Chris brought his relentless design philosophy and world-renowned sound to the CONVERT’s analog technology. Not only did he develop the audiophile-grade analog audio path, Chris also meticulously fine tuned the low-pass reconstruction filters mandatory to implementing any DAC. These filters lie at the heart of how a converter will perform, and the CONVERT series has the jaws of top pros hitting the floor when they hear the big natural sound and the powerful, ultra-clear low-end.

PERFECTING THE DIGITAL SIDE

We brought in digital guru Paul Messick to make sure the digital side of the CONVERT series would sing in perfect harmony with its finely tuned analog circuit. Paul rigorously refined the CONVERT’s JetPLL ultra-low jitter clocking technology until it surpassed the JET’s stated specs, resulting in the virtual elimination of jitter in the audio-band and beyond. Gone are the sonic headaches and end-of-day fatigue brought on by long-term exposure to jittery digital audio systems. The CONVERT-8’s superbly implemented digital technology delivers such a natural, open and inspirational sound that you’ll forget you’re even listening to converted 0s and 1s.

Reaching beyond transparency and accuracy, the sound of the CONVERT-8 is so open and 3-dimensional that many are saying that these are the most beautiful, natural sounding converters they’ve ever heard. Whether your focus is tracking, mixing or mastering, when you choose a dedicated DAC, you’re choosing the unit you’ll trust to make all your judgements. You need your DAC to be honest, but you also need it to sound beautiful. With the CONVERT you get the uncanny combination of detailed information and delightful inspiration. Coupled with any of Dangerous's analog summing mixers – or with your favorite console – the CONVERT-8 not only assures that you’ll hear the best sound possible, but you’ll be immortalizing that amazing sound into your final prints.

It’s no secret that many digital audio systems are slaved to the best sounding clock in the rack, and The CONVERT’s customized JetPLL ultra-low jitter technology is winning shootouts again and again – subsequently sending expensive external clocks into retirement. Simply use the Word Clock output and set the CONVERT into Master mode from the front panel, and all the digital gear in your studio can benefit from The CONVERT’s cutting-edge Jitter Elimination Technology (JET).

ON THE FLY INPUT SWITCHING

Unique to the CONVERT series, you can now swap between multiple digital inputs on the fly from the front panel buttons. No more digging into elaborate menus and system settings just to listen to iTunes, no more rerouting software drivers just to hear a different output. And because the CONVERT can automatically lock to the incoming signal’s sample rate, you don’t need to even think about sample rates as you switch between inputs. Four digital inputs include USB, AES/SPDIF, ADAT and Optical SPDIF (TOSLINK).

Aside from giving you instant visual confirmation of audio signal present across all eight channels, the “3-word-over” indicator tells you when three consecutive samples have clipped, meaning you’re a breath away from violating industry standards for CD reproduction and are about to generate clipping distortion that would be audible in any digital file.

Simply hook up the award-winning MONITOR-ST/SR Remote to the rear panel ports and you’ve got best-in-class desktop remote control over the CONVERT’s front panel input selectors. Add the CONVERT-8 to your existing Monitor ST/SR rig for seamless integration of today’s best DAC to your surround monitoring system.

Please fill out the form below and a Vintage King Audio Consultant will contact you with a ship date for the Dangerous Music CONVERT-8 Digital to Analog Converter.

Have a better price in mind for the Dangerous Music CONVERT-8 Digital to Analog Converter that you've been checking out? We're willing to work on it!Please fill out the form below with your contact information.Once the form is submitted, a Vintage King Audio Consultant will contact you as soon as possible with our best price on this product.