$ 2,999 .00
or $84/month for 36 months 0% interest for 36 months. 36 equal monthly payments required. Learn more
PayPal Credit, Express Checkout and Pay in 4 available.
More On Order
This product is in high demand and we are shipping as many orders as we can. Place your order today to be included in the earliest possible shipment. Order now and we'll ship when in stock from one of our three fulfillment centers. 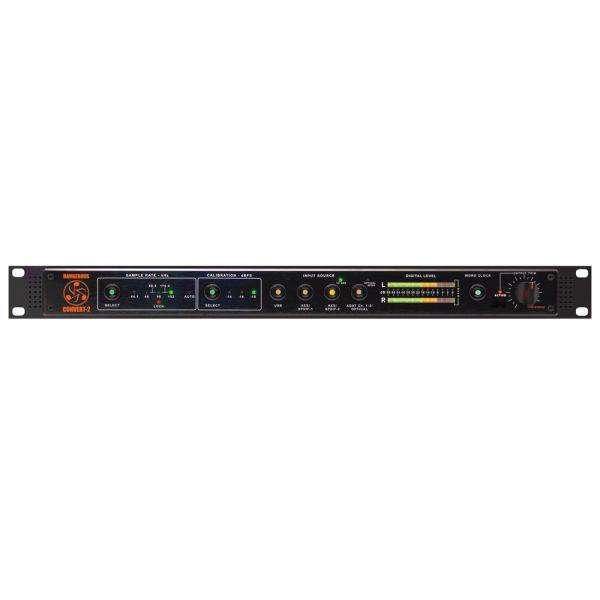 Dangerous has been building award-winning, standard-setting converters since 2002 when the Dangerous Monitor’s onboard digital-to-analog converter (DAC) swiftly became the industry reference. They’ve been asked over the years to build a stand alone DAC, and it's finally here in the CONVERT series. Eager to embrace the opportunity to develop a new and better DAC, we designed the CONVERT series converters from the ground up, utilizing cutting-edge digital technology coupled to a Chris Muth designed analog circuit that delivers their signature sound: open, articulate and powerful from top to bottom. Loaded with innovative and useful features accessed from an intuitive front panel, the Dangerous CONVERT-2 tops an elite class of dedicated stereo digital-to-analog converters in both sound and ease of use. The CONVERT-2 goes beyond transparency – you won't just hear everything, you’ll hear it beautifully.

It’s All About Implementation

While in theory most converters should be the same, among those who truly understand this hotly debated and endlessly researched area of audio technology, the mantra is implementation, implementation, implementation. How a converter’s components are selected, tweaked and assembled according to a specific design, and then tuned for superior performance within that plan is what sets a converter apart – for better or worse. The Dangerous CONVERT-2 has been developed by a team of experts with deep, up-to-the-minute knowledge of digital and analog converter technology.

Fine Tuning The Analog Side

A legend among mixing and mastering engineers for decades, Chris Muth has designed the analog gear used to mix and master an endless list of hit records and classic reissues. Chris’s powerful, articulate, hi-fi designs dominated the big studios in New York City since the 80s, and via Dangerous his designs have become essential components in the best modern DAW-based mixing and mastering studios. When Dangerous set out to develop a new dedicated stereo DAC, Chris brought his relentless design philosophy and world-renowned sound to the CONVERT’s analog technology. Not only did he develop the audiophile-grade analog audio path, Chris also meticulously fine tuned the low-pass reconstruction filters mandatory to implementing any DAC. These filters lie at the heart of how a converter will perform, and the CONVERT series has the jaws of top pros hitting the floor when they hear the big natural sound and the powerful, ultra-clear low-end.

Perfecting The Digital Side

Dangerous brought in digital guru Paul Messick to make sure the digital side of the CONVERT-2 would sing in perfect harmony with its finely tuned analog circuit. Paul rigorously refined the CONVERT’s JetPLL ultra-low jitter clocking technology until it surpassed the JET’s stated specs, resulting in the virtual elimination of jitter throughout the audio band and beyond. Gone are the sonic headaches and end-of-day fatigue brought on by long-term exposure to jittery digital audio systems. The CONVERT-2’s superbly implemented digital technology delivers such a natural, open and non-irritating sound that you’ll forget you’re even listening to converted 0s and 1s.

Reaching beyond transparency and accuracy, the sound of the CONVERT-2 is so open and 3-dimensional that many are saying that these are the most beautiful, natural sounding converters they’ve ever heard. Whether your focus is tracking, mixing or mastering, when you choose a dedicated stereo DAC, you’re choosing the unit you’ll trust to make all your sonic judgments, from choosing a mic to deciding how much limiting to use in mastering. You need your DAC to be honest, but you also need it to sound beautiful. With the CONVERT you get the uncanny combination of detailed information and delightful inspiration.

Fantastic D/A converter like any other Dangerous products. They're amazing!!! I was blown in the first time I simply played some YouTube videos through it. It's enormous the difference to any not-dedicated converter, like UAD or Apogee interfaces. I use this converter now mainly for my mastering chain combined with the Dangerous AD+, which is another beast! I highly recommend anything that Dangerous Music does!!!

incredible conversion. I can't say enough about this thing and I'm using it strictly for monitoring!

The Dangerous Convert has worked out great. It is perfect to feed my mastering chain... very detailed yet musical and smooth. I used the Antelope Eclipse to feed the chain before, which was also nice, but I felt like the Eclipse was a bit more grainy and less pleasing throughout the frequency spectrum. I don't think I would want to use the Dangerous for monitoring, but for feeding a mastering chain it is working great for me. Thanks!

Please fill out the form below and a Vintage King Audio Consultant will contact you with a ship date for the Dangerous Music CONVERT-2 Digital to Analog Converter.

Have a better price in mind for the Dangerous Music CONVERT-2 Digital to Analog Converter that you've been checking out? We're willing to work on it!Please fill out the form below with your contact information.Once the form is submitted, a Vintage King Audio Consultant will contact you as soon as possible with our best price on this product.