Loud and clear, quiet or dirty, smeared and wild repeats
MFR# Kilobyte Pedal
Shop All Caroline Guitar Co
Skip to the end of the images gallery 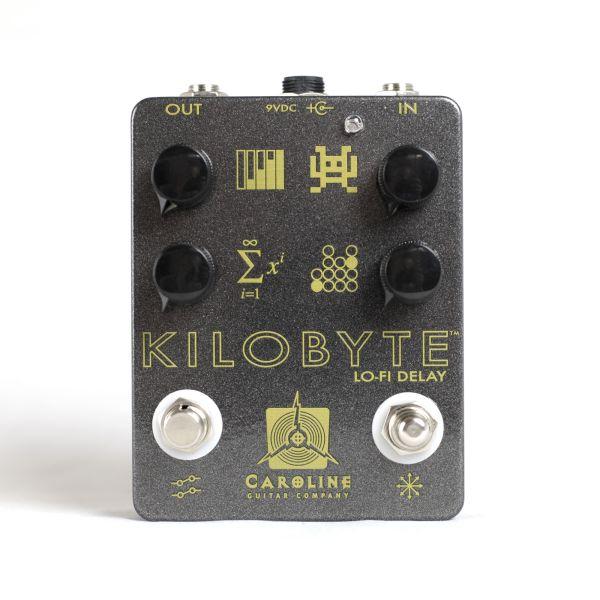 We’ve always wanted a truly macho delay pedal. One with manly delay repeats instead of the milquetoast whispers many manufacturers have called "echo." Caroline must have heard our prayers to the pedal goddesses and upped the ante by dropping Kilobyte, a truly inspirational delay with repeats up to 21 dB louder than the dry source signal. This sonic miracle is achieved by utilizing an analog overdrive/boost circuit feeding the digital echo path to make the echoes REALLY loud and clear, gritty and distorted, or ghostly and warm. Think all this electronic jiggery-pokery kills your dry tone? Turn the delay mix/level knob down and you'll hear how honestly your original signal has been preserved.

The PT-2399 delay chip is an interesting choice. Recommended for crappy Karaoke machines and kids toys, its horrible fidelity is surpassed only by its ability to distort. Caroline’s circuit exploits this perceived shortcoming by buffering the input signal and boosting the effect over said input signal. However, they didn’t stop molesting the innocent PT-2399 there. They pushed the delay time from the recommended max of 325ms to over 500ms, which doesn’t exactly let the chip relax. Which for all practical matters is a great sounding basis to build a gorgeously true bypass Lo-Fi delay pedal.

Jack DeVille, a designer out of Portland, Oregon, worked on the Mod control to give Kilobyte a touch of pitch shifting vibrato on the echo repeats for a hint of Magnatone warble. Also, to add a pinch of self-oscillating crazy-fun, a momentary switch sends the pedal into infinite feedback with additional high-pass filtering that slices through the mix like a plastic surgeon with a meth problem.

We chose Kilobyte because it’s just so damn cool! Who wouldn’t want a delay that boosts and distorts its echoes while keeping the original signal relatively pristine? We could see Kilobyte revolutionizing the Rockabilly/Psychobilly scene more than the discovery of a shipping container full of NOS pomade. The range of sounds are staggering— from Zombie Cliff Gallup scary to the clipped blues Dobro echoes of Chris Whitley’s Living With the Law, with a good dose of the Cocteau Twins’ Heaven Or Las Vegas ethereal shoe-gazing echo hipness for good measure.

I've owned many delay pedals over the years, since the days of the old analog bucket brigade pedals to the most current hi-tech digitalis delays. This is by far the coolest, most usable, most musical delay pedal I've ever owned. It does an amazing job of adding delay without getting in the way of the music as a lot of other pedals do. It sits nicely in the mix, and I find that it inspires me to play things I would never have thought of. Great Job to the folks at Caroline ! This is a "must have" pedal.

Please fill out the form below and a Vintage King Audio Consultant will contact you with a ship date for the Caroline Guitar Company Kilobyte Pedal - Kingston Gray.

Have a better price in mind for the Caroline Guitar Company Kilobyte Pedal - Kingston Gray that you've been checking out? We're willing to work on it!Please fill out the form below with your contact information.Once the form is submitted, a Vintage King Audio Consultant will contact you as soon as possible with our best price on this product.

VIEW
33007
I would like to thank VK for the wonderful sales assistance, service and prices. This was my first purchase with you and it won't be my last. I only wish I'd discovered you years ago!
Matthew R.
I had two Grammy wins this year - Ray LaMontagne & Carolina Chocolate Drops. Both made with help from Vintage King!
Ryan F.
In almost 20 years in Pro audio buying, never did I receive a unit so well packed and exactly as described. Works flawlessly. The whole process has been so smooth. I will never hesitate to do business with you guys in the future and will recommend you to everyone I know.
Martin C.
This was my first experience buying something from Vintage King (although I surf the "used" categories on the website frequently!), and, despite being on the other side of the world, I had absolutely no trouble and everything went very smoothly.
Phil T.
The speed of delivery exceeded my expectations! I was VERY pleased that my shipment arrived in time for a scheduled vocal tracking session. The packing insured that my order arrived safely. And the sales staff responded quickly to questions regarding the product.
James P.
Thank you so much! Vintage King has been so fair and easy to work with. I can't thank you enough. It feels good to trust such a hefty purchase to folks who are so helpful and knowledgeable. Vintage King is a sound designers dream store.
Noa L.
You guys have excellent customer service and I am excited about the next upgrade I complete on my fifth recording facility. I've been in the studio business for forty plus years. The salesman I worked with at Vintage King was the best of the best. You all rock!
Robby T.
I would recommend Vintage King to any one looking for top-class gear, unbeatable customer service and the best prices on the map!
Jake D.
My experience with Vintage King was excellent. The order was here fast considering it was out of stock. The sales person had SKB send it to me directly and I couldn't have been more pleased.
Michael D.
From the minute I placed my order I was kept well-informed through each step in your process. Even though I was buying a comparatively modest piece of gear, your attention to detail made me feel like I was purchasing a six-figure mixing desk.
Thomas W.
I am a new customer of yours. You guys provided me the absolute best deals in ordering all the equipment to power my brand new recording studio. Your customer service is amazing and i will always deal with you from here on out.
Rob M.
Thanks for your great service and getting this out today. You guys really are the Kings!
Alan B.
Better than expected! Truly impeccable service. Your team was professional, knowledgeable, provided speedy delivery above and beyond standard. Vintage King Audio is definitely my go to for all of my audio and information needs.
James O.