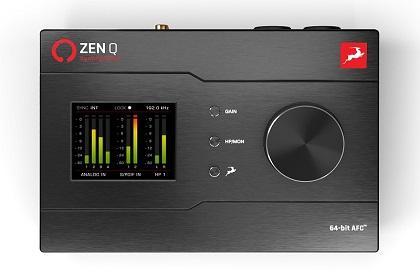 Antelope Audio is known for its crystal-clear converters and world-class clocking technology, both of which have been brought to the Synergy Core audio interface series. The brand has just announced its latest addition to the line, the Zen Q Synergy Core ($899).

In this blog, we'll explore the new Zen Q Synergy Core interface and deep dive into its feature set. Before we get too far into the Zen Q's features, let's talk a little bit about the Synergy Core series and how the latest interface fits into the lineup.

In 2019, Antelope Audio developed its innovative Synergy Core platform, which combines FPGA and DSP technology to deliver unparalleled processing power. Synergy Core technology takes the processing power off of your computer entirely, allowing you to record and mix with hyper-accurate analog-modeled plug-ins in real-time. Most of the modeled analog gear is considered industry-standard “golden units,” while other effects emulate rare and expensive pieces of hardware that are difficult to find, giving musicians and producers the ability to create studio-quality recordings right from home.

To showcase this new technology, Antelope Audio developed a line of no-compromises portable desktop interfaces that combine professional sound quality and versatile I/O with the new Synergy Core technology. Each of the new Synergy Core series interfaces includes Antelope’s renowned converters, clocks and preamps, along with a collection of popular analog-modeled effecs for recording and mixing.

The Zen Tour Synergy Core ($1995) is the flagship model of the Synergy Core series with expansive analog and digital I/O, making it ideal for pro users who want to do it all. With four mic pres and four line/Hi-Z ins with phantom power, eight analog outs, two headphone and two reamp outs, the Zen Tour is big enough to record the whole band.

On the other end of the spectrum, the Zen Go Synergy Core ($499) is a compact, portable desktop interface that’s perfect for those who are just starting out or looking to record on-the-go. This versatile USB-C audio interface is packed with tech featured only in high-end professional studios, giving you instant access to premium sound quality anywhere you go. With two XLR and line inputs, the Zen Go is perfect for recording solo artists.

The new Zen Q Synergy Core interface bridges the gap between the versatile Zen Tour and the compact Zen Go. It features the same professional sound quality and innovative effects plug-ins as the others, with just the right amount of I/O. Zen Q is perfect for those who are looking for a portable desktop interface with a little more connectivity than the Zen Go, and a lower price point than the Zen Tour.

What’s not to love? Check out what makes the new Zen Q Synergy Core audio interface so attractive below.

Antelope Audio has a reputation for delivering uncompromising sound quality, and the Zen Synergy Core series interfaces are no different. Zen Q makes it easier than ever to create studio-quality recordings and mixes at home or on the go using the same high-end components and cutting-edge technology as the top-of-the-line Orion Studio and Galaxy 64 Synergy Core interfaces.

The Zen Q Synergy Core combines Antelope's next-gen digital audio technology with traditional console-grade circuitry, giving you the best of both worlds. Hear every detail thanks to class-leading AD/DA conversion with up to 127dB of headroom. Record, mix and stream at resolutions up to 24-bit / 192 kHz for pristine sound. And with Antelope's proprietary 64-bit AFC technology and Jitter Management algorithm, the Zen Q Synergy Core offers impressive width and stereo separation.

Looking for even more processing power? Expand your collection of virtual outboard gear with more than 50 optional plug-ins available through Antelope Audio's Software Store. And with Antelope's advanced modeling engine, you can pair Zen Q Synergy Core with the Edge line of microphones to gain access to dozens of vintage microphone emulations.

Don't let its size fool you! The Zen Q Synergy Core is much more than your average desktop interface. Featuring two Discrete ultra-linear preamps with 65dB of gain, the Zen Q Synergy Core delivers studio-quality recordings in any setting. Easily capture a variety of sources including mics, guitars, synths and more using two combo XLR jacks with switchable modes to toggle between the Discrete console-grade preamps, line level, or Hi-Z.

When it comes to mixing, the Zen Q offers a stereo monitor output and a separate pair of line outputs to connect an additional set of studio monitors or external outboard gear. And for recording, Zen Q features a pair of headphone outputs with independent volume control, powered by a mastering-grade D/A converter.

Out of the box, the Zen Q Synergy Core offers up to 16 input and 16 output channels in any popular DAW with custom macOS and Windows drivers. Plus. Zen Q is easily expandable with ADAP and S/PDIF I/O, making it easy to introduce new gear to your workflow as your studio continues to grow.

With a lightning-fast Thunderbolt 3 connection and advanced audio drivers, the Zen Q Synergy Core delivers low-latency connectivity that's optimized for recording, mixing and streaming. Coupled with a clean direct monitoring path and powerful Synergy Core effects, you can process tracks in real-time with imperceptible latency. Plus, Zen Q is bus powered, making it easy to set up quickly without having to find an open outlet.

Simplified I/O routing and pre-configured settings make it easy to quickly toggle between recording and mixing workflows. The front panel is loaded with easily accessible controls so you can quickly get the job done without your gear getting in the way. Streamline your setup with customizable presets for signal routing, level adjustments, mixer and effects settings and more.

With class-leading sound quality, versatile features and a compact design, the Zen Q Synergy Core interface is the ultimate recording solution for any desktop studio. Perfect for on-location recording, traveling musicians or producers who like to work on-the-go, the Zen Q offers everything you need to create professional-sounding tracks anywhere you go.