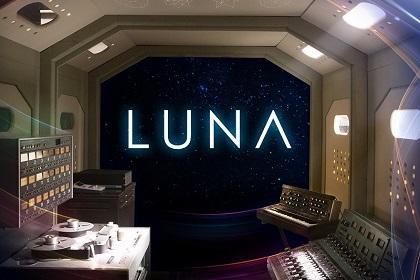 This morning at the 2020 NAMM Show, Universal Audio announced a Spring launch for the new LUNA Recording System. This is the beloved hardware and software manufacturer's first foray into the world of DAWs. It will be available for free to owners of Thunderbolt-equipped rackmount Apollo Xs, Apollo Twin X (DUO and QUAD), Apollo x4 , and Arrow interfaces (Mac only).

What can you expect from LUNA? Users will be treated to a full-featured creative suite for recording that follows an analog-style production system. Additionally, the DAW will feature built-in Neve summing, tape emulation, and new software-based instruments. Let's go further into detail and break down some of the specifics of what we know so far.

Since the LUNA Recording System is meant to be integrated with the Apollo and Arrow, routing and recording audio is extremely easy. LUNA users will be able to access DSP-powered plug-ins with no discernable latency, thanks to Universal Audio's brand new Accelerated Realtime Monitoring feature.

Universal Audio's Neve emulations have always been second-to-none and the new LUNA Recording System gives creators the ability to add that extra magic to their recordings. The DAW features a built-in Neve summing mixer based on the Neve 80-Series mixing consoles that were originally created by the brand in 1960s and 1970s. This Neve summing is found at the heart of LUNA's mixer and will offer the ability to bring new life to relatively clean sounding mixes.

The Warmth Of Tape Via Luna

Within LUNA's software, Universal Audio designers created an integrated Multitrack Tape emulation that brings that classic analog tape warmth to tracks. This built-in extension is dubbed "Oxide," and for even more tape goodness, Apollo and Arrow owners can purchase the optional A800 Tape Recording Extension.

For its new DAW, Universal Audio has created a set of software-based instruments that take full advantage of the brand's incredible modeling, sampling, synthesis, and signal processing technology. Upon launch, three instruments will be available with Luna, including a Moog Minimoog, the Ravel Grand Piano based on a Steinway Model B, and the Shape toolkit. Shape will offer a wide range of vintage keys, drums, guitars, orchestra and more, all designed by UA with some help from Spitfire Audio, Loops de la Creme, and Orange Tree Samples.

As previously mentioned, the LUNA Recording System will be available for free download in Spring 2020. Owners of Thunderbolt-equipped Apollo and Arrow interfaces will have access to this download, which only compatible with macOS systems.