The Hottest Plug-Ins And Software of 2019 (So Far) 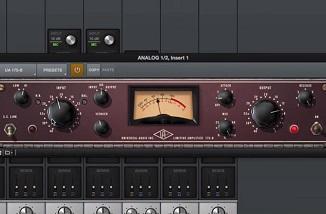 It’s hard to believe that we’re already over halfway through 2019. So far, it’s been a huge year for groundbreaking creative software and plug-ins. From analog emulations with unprecedented accuracy to innovative new plug-ins, there’s never been a better time to mix in-the-box. In this blog, we’re breaking down some of the hottest plug-ins released so far this year.

Choose between three sets of high-end speakers as well as full 7.1 and 5.1 surround sound setups. Abbey Road Studio 3 makes you feel like you’re really sitting in the sweet spot with Nx Head Tracker technology, which tracks your head movements and alters the stereo image based on your physical location for a truly immersive mixing experience.

What do you do when you want to add big, deep, rich sub-bass to your tracks? Call in the Submarine! Waves Submarine uses two subharmonic generators with Organic ReSynthesis technology to create powerful bass with unprecedented clarity and low-end accuracy.

Perfect for beefing up kick drums, adding power to bass synths, or even fattening up your mix bus, Waves Submarine adds clean, clear subharmonic frequencies up to two full octaves below the selected range. Waves Submarine doesn’t just down-pitch existing signals, it completely deconstructs them down to their core elements to create an all-new subharmonic signal with the exact pitch and time of the original for a natural, musical tone.

Deep in the bowels of the famous Capitol Records building in Los Angeles is one of the most beloved studios ever committed to tape. Capitol Studios has been home to engineers like Al Schmitt, Darrell Thorp, and Frank Filipetti, all of whom have taken advantage of the facility's prestigious echo chambers. With Universal Audio's new Capitol Chambers plug-in, you can also use the famous echo chambers on your next audio projects. Replicate the chamber's entire signal chain, use incredible presets from the aforementioned engineers and move around the digital microphones with Dynamic Room Modeling technology.

Before the world-famous 1176 came the 176 and 175B compressors. Designed by the legendary Bill Putnam, these classic tube compressors sparked a recording revolution with their rich tube gain sound and lightning-fast attack times. With less than 1,000 units made, these rare and highly coveted compressors are typically only found in the world’s most illustrious studios... Until now.

With the Universal Audio 175B and 176 plug-ins you can capture the same iconic tone right in your DAW. As the only authentic emulations of the 175B and 176 compressors, these plug-ins expertly recreate Putnam’s tube-based designs and feedback compression circuit with unparalleled accuracy, which delivers softer compression at lower input levels and aggressive limiting at higher levels.

For decades, the TAB/Telefunken V76 preamp has been one of the most sought-after vintage preamps on the market. Now, with the Universal Audio V76 Preamplifier plug-in, you can capture the same classic sound as iconic studios like Decca, EMI, and Abbey Road.

With big, rich “hi-fi” tube tone and flexible controls, the V76 is perfect for adding vintage vibe to vocals, guitars, drums, and more. And with hyper-accurate emulations of the original pentode tube, transformer stages, circuit designs and more, the Universal Audio V76 Preamplifier is the only authentic V76 Preamp plug-in available.

Although the Townsend Labs Sphere L22 microphone modeling plug-in has been out for some time, the new 1.4 Update introduces emulations for 10 new and classic studio microphones. The LD-563 is a classic German bottle microphone with interchangeable microphone heads based on the renowned M7, M8, and M55k capsules. The LD-017T actually emulates a modern Soyuz 017 TUBE large diaphragm microphone for a hi-fi boutique sound. Two DN-409 emulations deliver the classic tone of vintage Sennheiser MD409 microphones, while three DN-421 models emulate the original MD-421 microphones from the 1960s. The DN-12A and DN-12E are modeled after vintage AKG D12 microphones—perfect for kick drums and bass guitars. Finally, the new SD-416 models the Sennheiser MKH-416 shotgun microphone, an industry-standard for voice-over and ADR sessions.

iZotope are known for their advanced signal processing suites, but this year they took things to a whole new level with Neutron 3. With intelligent analysis software, new interactive visual feedback and flexible channel strip-style processing, Neutron 3 makes it easier than ever to quickly dial in competitive mixes. Dedicated modules for traditional effects like EQ, compression and dynamics processing, as well as advanced tools like an exciter, a transient shaper and the innovative sculpture tool, Neutron 3 gives you total control over every aspect of your mix in one easy-to-use interface.

FabFilter plug-ins quickly took the recording industry by storm with their superb sound quality, intuitive interfaces and innovative features. Pro-Q 3 continues that tradition with an array of new features for fine-tuning your tone with greater accuracy than ever before. The improved interactive retina display makes it easy to identify frequency problems, while the Spectrum Grab feature lets you reach out and adjust peaks in real-time. And with per-band controls for dynamic EQ, mid/side processing and a wide range of filter shapes, Pro-Q 3 is one of the most versatile tone-shaping tools ever created.

McDSP have a long reputation of creating colorful signal processors inspired by vintage studio gear, but they’ve really outdone themselves with the 6060 Ultimate Module Collection. With the largest collection of modular signal processors available, the 6060 Collection puts an entire recording studio’s worth of vintage gear right at your fingertips. The 6060 Collection captures the sound of some of the most iconic analog studio gear of all time, but also introduces a number of new features for added versatility. With plug-ins modeled after classic designs by Fairchild, Teletronix, Neve, and dbx, as well as an array of original algorithms, the 6060 Ultimate Collection offers limitless possibilities.

There’s something magical about recording to tape, but with more and more creators making hit records on their laptops, it’s getting harder and harder to capture that classic sound. That’s why T-RackS Tape Machine Collection is an essential plug-in collection, as it lets you capture the unmistakable sound of four iconic tape machines.

With hyper-accurate emulations of the Ampex 440B, Studer A80 Mk II, Revox PR99 Mk II and MCI JH24 multi-track tape machines, you can instantly transport your recordings back to the golden era of analog recording. And with four different tape emulations, including 3M 250, Quantegy GP9, Ampex 456 and 499 formulas, the Tape Machine Collection offers limitless tonal versatility.

Unless you’ve been living in a windowless studio for the last few years, you’re probably pretty familiar with Steven Slate and Slate Digital. His groundbreaking “Everything Bundle” revolutionized the world of digital signal processing. And now, he’s done it again. As part of his “All Access Pass,” Slate has introduced a number of popular new plug-ins. The Gates Bundle offers two custom gate modules for cleaning up noisy recordings.

And that’s just scraping the surface! What are some of your favorite plug-ins released so far this year?