Prophet's Song: The Making Of Queen's A Night At The Opera 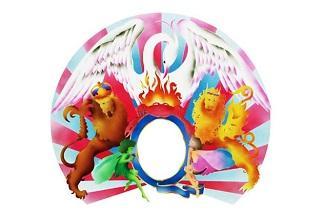 Queen is one of the greatest rock bands of all time, known for their excessive orchestrations, progressive productions and extravagant theatrical performances.

With Queen back on the tip of people's tongues (thanks to a new biopic and upcoming tour), we decided to take a look back at the making of A Night At The Opera. Continue on below to discover what the recording process was like and learn more about the album's lasting legacy.

A Poor Boy From A Poor Family
Often considered to be “ahead of their time,” the band didn't find success until they released "Seven Seas of Rhye" on their sophomore album, Queen II. Queen found international success with "Killer Queen" from their third album, Sheer Heart Attack. However, the members of the band were as poor as ever.

“Immediately prior to A Night At The Opera we were going through a really difficult period. We had [released] a very successful album with Sheer Heart Attack. We thought it was a very good album, it had done very well. We had a major worldwide hit with “Killer Queen,” but we were broke and we wanted to know why.” — Roger Taylor, drummer

Due to a bad deal with their record label and manager, Trident Studios and Norman Sheffield, Queen received almost no money from the sales of Sheer Heart Attack. After firing Sheffield for allegedly stealing from the band, Queen hired John Reid, who immediately instructed them to “go into the studio and make the best record you can make.”

Mercury started by penning a “hate letter” to Sheffield in the form of a song titled "Death On Two Legs." The song includes lyrics so vicious and vindictive that guitarist Brian May actually “felt bad singing them.”

After finishing the track, Mercury returned to Trident Studios to get Sheffield’s opinion on "Death On Two Legs." After hearing the track, Sheffield was “appalled” and sued the band and their new record label for defamation. The case was eventually settled out of court, and Sheffield denied the allegations of the song in his 2013 autobiography entitled Life on Two Legs: Set The Record Straight.

Beware The Storm That Gathers Here
Recording for Queen’s A Night At The Opera took place at seven different studios between August and November in 1975. The project began with a three-week writing and rehearsing session in a rented house in Herefordshire.

Since the sessions took place in so many different locations, the recording setup changed a bit from session to session. In 1995, Sound on Sound published an interview with producer Roy Thomas Baker and engineer Gary Langan called "The Making Of Queen’s 'Bohemian Rhapsody,'" where they talk in detail about the process of tracking one of the most historic songs of all time.

After loading-in to the illustrious Rockfield Studios, Roger Taylor assembled his kit at the far end of the live room. John Deacon set up his Marshall bass stack at the opposite end of the room, just to the right of the control room window. Brian May set up his guitar rig in an isolation booth. May used his homemade Red Special guitar and a custom amp built by Deacon, made using the circuit board from a Supersonic PR80 portable radio and a 9-volt battery. Mercury was seated at the piano, close to the control room window.

Taylor’s kit was miked using an AKG D112 on the kick drum, and a single Neumann U67 or U87 on the snare. Neumann U67s and U87s were also used as tom and overhead mics. Deacon’s bass was recorded using a direct box and an Electro-Voice 666 or Neumann U67 condenser on the Marshall cabinet.

“We used to have a few different types of mics set up, from which we would choose or blend signals for anyone given sound, and it's a technique that I still use today. Brian's Vox AC30 amps were backless, so we also set up some mics behind them and near the wall to capture some ambiance and the full spectrum of the guitar sound. There was always a lot of experimentation going on during our sessions. Brian generally used AC30s but John Deacon had also thrown together something like a Tandy Radio Shack speaker with a 3 Watt amplifier, and we tried that with a treble booster. We tried putting microphones down metal and concrete tubes to get more of a honky sound, and it all seemed to work. It certainly all stands up today when I hear it all again.”

While recording A Night At The Opera, Queen and co. made it their goal to push the boundaries of traditional recording methods. The band explored instruments such as timpani, gong, harp, double bass, Wurlitzer and a toy koto for months. Baker experimented with peculiar recording techniques to create unique effects. For instance, he achieved the speed-up effect in the guitar solo of "Prophet Song," by starting and stopping a reel-to-reel machine.

To capture the megaphone effect on the song "Lazing on a Sunday Afternoon," Baker recorded Mercury’s vocal and sent the recording back through the headphones in the live room. After turning up the volume, he placed the headphones around a tin can, which amplified the recording with a tinny, hollow effect.

Little High, Little Low
Eventually, the band packed up their instruments and headed to SARM (East) Studios with Baker to mix the record, where they used a Trident B console.

"That console was the second B-series model that Trident delivered from Malcolm Toft. It was a great board with such a unique sound, although I couldn't say why. I noticed that when it was resold, it was described as the board used to mix "Bohemian Rhapsody," and I think they got more money than they originally paid for it. We used an MCI machine at SARM which we called ‘Munchy, Crunchy and Intermittent’ because it was always falling apart!” — Roy Thomas Baker

After a lengthy process of stitching together months worth of overdubs, Langan compiled what would be the final version of "Bohemian Rhapsody."

"It was an old VCA system, which was responsible for the distortion at the end of the opera section. If you listen to the record closely you'll notice it. But there wasn't a single thing we could do about it. It was a combination of the extra track-bouncing and the use of the old VCA technology that was employed for the computerization. When it got to that stage, the meters were so pinned that the VCAs in the board would not take any more volume. So we had to turn the computer off and the end rock section of ‘Bohemian Rhapsody’ was actually mixed by hand in the traditional way, where we each had control over a fader or group of faders.” — Roy Thomas Baker

God Save The Queen
Released by EMI Records in UK and Elektra Records in the US on November 21, 1975, A Night At The Opera launched Queen intro superstardom with classic songs like "Bohemian Rhapsody" and "You’re My Best Friend." While the now-classic record tops many of today's "Greatest Album" lists, it was originally met with mixed reviews.

Several weeks after it was released, A Night At The Opera began climbing to the top of the UK Albums Chart where it stayed for four non-consecutive weeks. Shortly after, the album peaked at number four on the US Billboard 200 chart. In 1977, the album received two Grammy® Award nominations for Best Pop Vocal Performance and Best Arrangement for Voices.

A Night at the Opera became Queen’s first Platinum-selling album in the US and went on to sell six-million copies worldwide. To this day, "Bohemian Rhapsody" remains one of the best-selling singles in world.

On the whole, the album stands as a lasting artistic statement, one that saved a band from going under and propelled them to epic levels of stardom.


Products in this Article
Categories: Making Of
Posted By: Brad Pack