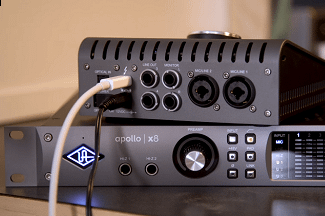 The connectivity options for the Universal Audio Apollo has always been one of the interface's greatest features. By combining multiple Apollos together, you can expand your processing power and feature set to make your workflow faster than ever before.

When specifically pairing a Universal Audio Apollo X interface with an Apollo Twin, there are some really handy features you can deploy for both recording and mixing. In this configuration, your Apollo Twin instantly becomes a monitor controller for up to three pairs of monitors and can be used as a talk-balk mic controller during your session. Not to mention, the Apollo Twin will also expand the processing power of your Apollo X rig.

Watch our new video below, Apollo Expanded: Pairing The Apollo X and Apollo Twin, to learn how to utilize the two interfaces together in a way that unlocks a completely new workflow. If you have any further questions about how to pair Universal Audio interfaces together, contact a Vintage King Audio Consultant via email or by phone at 888.653.1184.

Categories: How To
Posted By: Eric Allen