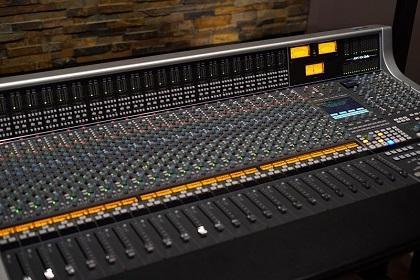 Solid State Logic has a wide range of consoles for both recording and mixing purposes. Finding the right one to fit the needs of your studio is not a problem – it’s a solution waiting to be discovered! Today we’ll be talking about the AWS 900 Delta Series recording and mixing consoles.

If you’re running a mid-sized production facility, the Solid State Logic AWS 900 Delta Series is most likely the answer for you. These full featured hybrid consoles that combine Superanalogue™ sound with a DAW controller. The AWS 900 Delta Series offers a choice of three different channel sizes and configurations. All three contain a variety of inputs within a compact frame size of 24 faders:

An Overview Of The Solid State Logic AWS 900 Delta Console

For those choosing the entry-level AWS 916, have no fear of obsolescence: the 916 comes fully wired for an eventual upgrade to the 924 console configuration.

For the AWS 948 console only, the following additional features apply:

Routing & Sends For Each Channel

The AWS 948 contains all of the above, plus additional features:

The Master Section Of The AWS 900 Delta Series Consoles

The Master Section of the AWS 900 Series contains all of the tools essential to maximize the tonality and simplifying the workflow of your tracking and mixing.

Often imitated but never equaled, the center section compressor from the 1980's G-Series analogue console is an audio production legend. It is a simple unit with a simple purpose; it makes complete mixes sound bigger, with more power, punch and drive. It brings cohesion and strength to your mix without compromising clarity. To this day it remains a key element of the SSL sound and has featured on countless classic recordings.

Automation – Plug-In to a Power Outlet

TotalRecall™ is a system patented by SSL to save and recall analogue control settings for any session or project. The system creates a snapshot of the current console settings, saving it via the Logictivity Browser. The Center Section TFT display shows a graphical representation of this information, allowing the engineer to manually reset the various controls. For even more efficiency, the AWS includes the "TR Autoscan" feature, which highlights only those channels needing adjustment from their present settings.

The one-of-a-kind SSL δelta-Control (δ-Ctrl) automation system combines the best analogue automation with a DAW based workflow. Your DAW will view the automation data just like a plug-in.

The δ-Ctrl Single Fader Plug-in is a native AAX/AU/VST/VST3 plug-in that provides automation of AWS mix bus and channel volume as though it were a DAW plug-in. By inserting 24 instances into the DAW session, control of cuts and volumes for all 24 AWS channels is provided.

The DAW’s automation system is used to record and playback AWS volume control data. This can be entered either right from the console faders or from the plug-in GUI fader. The δ-Ctrl plug-in is inserted into a DAW mixer audio or aux channel.

The plug-in then uses a high speed ethernet network to send/receive volume data from the AWS. Audio on the DAW track passes unprocessed through the plug-in slot so it can be combined with other DAW plug-ins.

The δ-Ctrl plug-in GUI shows the AWS Volume and Mute switch as parameters and their automation data is recorded to the automation lane of the selected DAW channel. His is converted during playback into δ-Ctrl messages and routed back to the AWS via the ethernet connection.

The δ-Control 24 Channel plug-in provides compatibility to Logic users and also offers alternative workflow possibilities to other DAW users. Using one plug-in GUI, all the features of an AWS channel can be automated including:

δ-Ctrl keeps all the key elements of SSL’s Signature Mix System with beloved features such as JOIN, REVISE, MOTORS OFF and SNAP. Assignable hardware buttons can override all actions. The MOTORS OFF mode not only offers the full non-moving fader SSL VCA mix, but the new Touch Write mode emulates the SSL G Series Mix system ‘Immediate Pickup’ (IP) option.

There are currently three upgrade options available to bring all previous generations of AWS console (the 900, 900+ and 900+ SE), as well as the 916/924/948 versions up to the current AWS δelta feature specification.

Not only does the SSL AWS 900 Delta Series provide a huge variety of analogue features in a small footprint, but its hybrid design also allows the engineer to integrate a variety of DAW applications such as Logic Audio®, Pro Tools®, Sonar® Nuendo® and a host of others. All key functions such as recording, mixing, routing and editing can be controlled via the console.

The Center Section of the console sports a TFT to show DAW status and Plug-in parameters, as well as other console set-up info. Below the TFT display is the DAW HUI Plug-in/Process Controller, with 4 rotary encoders that are auto-mapped from the DAW, with integral push-push switches, and 4 assign keys. A pair of extra keys allow for page up/down control. The channel SEL switches assign the Plug-in Editor, along with the EDIT switch. The faders can also control the plug-ins, via the Mackie Control protocol.

The DAW channel and send levels, along with routing, can be assigned by the user to separate channel rotary encoders that have rotary LED level display. The Channel and Send levels can be "flipped" on to the main channel fader.

There are buttons dedicated to the typical Transport functions of PLAY, RECORD, REWIND, FAST FORWARD and STOP. 10 other buttons are provided for typically used shortcut keys. Also included are controls for navigation, simple zooming, and selection of DAW objects. There is even a jog/shuttle wheel for scrub and track navigation.

All sessions can be easily managed using the AWS Remote, powered by Logictivity. An onboard SD card saves all session data, which can be transferred to a USB thumb drive or sent by email, making your session highly portable.

The AWS Series is a SuperAnalogue™ console that boasts the features and performance specs that have made it the industry standard for pristine analogue audio. The combination of ridiculously low noise floor, THD and crosstalk allows the clarity of your recordings to come through, without all the baggage. Extended headroom lets that clarity breathe, with plenty of space to spread out your mix, and run it hotter if you prefer. To determine which 900 Series is best for you, contact your Vintage King audio consultant today.

If you’re interested in getting more information or ordering a Solid State Logic AWS Delta Series recording console, contact a Vintage King Audio Consultant via email or by phone at 866.644.0160.