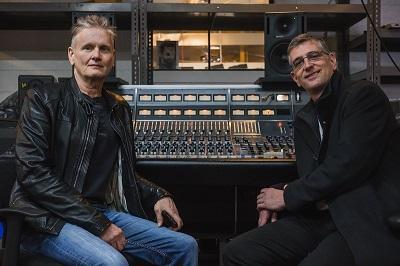 Even though Bob McCutcheon's career led him into the world of business, the Pittsburgh native has been a lifelong musician who always loved being in the recording studio. As his children got older and they became more interested in recording, Bob decided it was time to expand upon a dream he had since the late 1980s.

"I had my first studio in 1988 and always wanted to start another. I kept nearly every piece of gear I've ever owned," says McCutcheon. "My children's passion for music grew and it only further motivated me. Truth be told… It just gave me the excuse I needed. Building and owning a commercial studio was always the dream."

McCutcheon got started by buying an old bank, building out the inside and by 2016, The Vault Studio was open for business. In 2018, McCutcheon came to Vintage King to check out a historic Neve 8058 that had been recently refurbished by the Vintage King Tech Shop. He would end up purchasing the console and The Vault would become a special part of the desk's pedigree.

We recently caught up with Bob McCutcheon to talk about the building of The Vault, the classic Neve 8058 console and the role of his studio in the community. Continue on below to read our interview and see a time-lapse video of the console being loaded up at our tech shop in Ferndale, Michigan.

What makes the building The Vault is in unique and how did you prepare it to become a studio?
The studio was built in an old bank building (circa 1955). Its footprint and construction were ideal for a studio. We were able to completely open the space (a full empty box with no load-bearing walls). As a result, there were no impediments or workarounds from a technical design perspective.

I bought the building and then we hired Yancher Design and Consulting Group in LA to do the full technical and architectural design and local contractors for the build. I actually consulted with Carl Yanchar prior to purchasing the building to make sure it would meet our needs. I wanted to make sure it was done right from the beginning, I didn’t want to retrofit into the space. I wanted it built to purpose.

What really makes the space unique is the full walk-in vault in the basement and the open cement construction of the rooms below. This allowed us to further isolate guitar cabinets and create live reverb chambers in the vault and basement.

What was the vision for the studio overall and the type of gear you wanted to bring in?
I originally created the studio to be a personal passion project built to commercial spec. I’ve always been an analog guy going back to the 1980s, so I wanted vintage and state-of-the-art outboard gear and mics. While I had since converted to Pro Tools and admittedly love plug-ins and mixing in the box, I still insisted on a full console, real outboard gear and good mics.

What about the Neve 8058 stood out to you about it? How important was it to get a console with this type of pedigree?
The Neve 8058 allows us to step up to a whole new level. I’ve always been in love with Neve. Ironically, it was the Sound City documentary by Dave Grohl that inspired me to begin building this studio in the first place. As many now know, that Neve changed a lot of lives. This specific desk was originally at Allen Sides' Ocean Way Studios in LA and before me it was owned by Scott Litt who produced REM, among others. It has a history and pedigree of its own.

Can you talk about the restoration job done by Vintage King on the desk?
Vintage King did an amazing job restoring this desk. The attention to detail and commitment to quality are unmatched. They have a genuine passion and, equally important, respect for the history and originality of the gear. Not only the painstaking technical work that went into every module, but the focus on the aesthetics as well. The final restoration was absolutely beautiful. [Technicians] Rich Hunt and Cedric Yee were amazing to work with.

What does the Neve console add to your studio's sound?
Nothing can match the sound of the Neve (in my humble opinion). That full, rich, punchy sound that you get from the Neve, it's so hard to describe. It’s the sound you chase all of your life and the sound that so many other manufacturers attempt to emulate. I love when others say they’re gear has a Neve-like sound. I wanted THE Neve, not Neve-like. I could not wait to track drums once it was commissioned at The Vault. They had to hold me back to finish installing [Laughs].

What other gear have you picked up from Vintage King for The Vault?
The SSL AWS 948 we had before the Neve was also originally purchased from VK. I’ve picked up a variety of other outboard pieces over the years and I still have my eyes on a few vintage mics. More recently, I picked up a matched pair of Coles 4038 that I love.

How did you come to work with Jimmy Hoyson (Tom Waits, Celine Dion, Michael Jackson) and bring him in as Chief Engineer at The Vault?
Although Jimmy has been out in LA for 30+ years, he is a Pittsburgh native. He was looking for studios to base himself while here in town. We met during a session that I was working with some common friends. We started talking and just hit it off.

He was looking for someone that was open to making changes and taking a bigger step and I was interested in working with him and learning from someone that’s had the success in the business that Jimmy has. His experience and credentials, combined with the Neve 8058 set us apart in Pittsburgh.

It seems like your pretty intent on building something special for the music scene in Pittsburgh. What does The Vault add to the community and how are you making your impact felt?
I think the key distinction for me is that I don’t run The Vault to make a living. This is my passion project. The Vault is a larger brand that includes the studio, an indie label (Vault Records), a platform for promoting local artists (Inside The Vault), a charitable fund that was established in my son's memory (The Rhythm19 Fund) and potentially a recording school with Jimmy.

The whole concept behind The Vault was to create a community and a co-creation space that will support local artists and promote Pittsburgh artistically. I’ve always known that Pittsburgh has amazing talent. The city is again vibrant and rich with new energy from tech, food, art and the continued growth of the movie industry. We need more catalysts and community leadership to support and showcase all of this amazing talent and energy. At The Vault, we are just trying to do our part.

What's the best part of coming to The Vault Studio every single day?
It's not a job. I get to do what I love and I get to work with amazingly talented people. I’m inspired by the people around me. I love that I get to do that every day and feel blessed that I can share it with family and friends.

If you're interested in vintage recording consoles, Vintage King is your ultimate resource for finding the perfect desk for your studio. Contact one of our Audio Consultants by email or by phone at 888.653.1184 to learn more about what consoles are currently for sale and our restoration services.