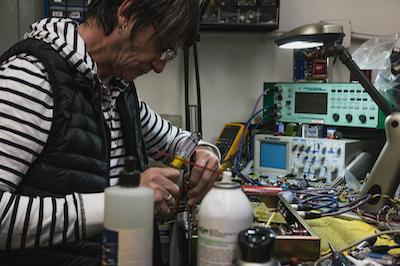 While Mark Loughman claims to have come to America with just a bag of CDs and his guitar on his back, it's apparent from talking to him that he also brought something else. It was an insatiable hunger to put his stamp on the music industry, one that eventually led him to form BAE Audio.

In the time since he took an internship, learned how to solder his first piece of gear and started his own company, Loughman has brought BAE Audio to great acclaim. The brand's take on the classic 1073 module (BAE 1073, BAE 1073MPL, 1073DMP) and countless other pieces of analog gear have propelled them to the top of the pro audio industry and made them a staple in studios all over the world.

Watch Vintage King's Inside Look At BAE Audio below to learn more about the brand's history and Loughman's philosophy on all things analog. Continue on after to see some exclusive photos from inside BAE's Hollywood, California-based headquarters.