Turn Me Up Real Loud: The Making of Van Halen's Debut 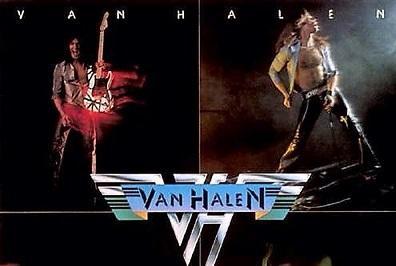 There's no doubt about it — Van Halen is one of the most influential rock bands of all time. They've sold over 56 million albums in the US, including at least 10 million copies of two different albums, and hold the record for most number-one hits on the Billboard Rock charts.

As for the music itself, Van Halen created a unique mix of hard rock, blues and heavy metal that featured a sonic force never heard before. The combination of Eddie Van Halen’s innovative guitar playing, David Lee Roth’s near-performance art approach to being a frontman and the powerful Van Halen/Anthony rhythm section cemented them as rock gods. The off-stage antics like the "no brown M&Ms" on their rider? The cherry on top of it all.

In honor of the 40th anniversary of Van Halen's debut, we're taking a look back at the band's history and the recording process of their first album. Read on to learn how all of this started just because Eddie needed a PA system…

The Genesis of The Rock Gods

The Van Halen brothers were born in the Netherlands in the early 1950s. They moved to sunny Pasadena, California in 1962, and it didn’t take long for them to start raising Hell.

Eddie started studying classical piano, but eventually decided to buy a drum kit. He had to get a job delivering papers to earn the money to pay it off and while he was working Alex would sneak in and practice. Eddie caught him in the act one day and said, "OK, you play drums and I'll go play your guitar.” Now they were on to something.

They formed a band called Genesis in 1972 with Mark Stone on bass. No, not that Genesis. They had auditioned a number of lead vocalists, all of which were ultimately underwhelming, so Eddie took on the role. David Lee Roth actually auditioned multiple times, only to be turned down. He did, however, have a PA system that they were interested in.

After months of renting the PA, they decided they could save some money by letting Roth join the band. In 1974, they replaced Mark Stone with bassist Michael Anthony, and the founding members of Van Halen were finally together. That name though…

Van Halen started to build up a buzz in Pasadena. Most clubs wouldn’t book them because they were “too loud” or “too edgy,” so their first gigs were mostly backyard parties and flatbed trucks. They built up a following by passing out flyers at local high schools.

The band started landing gigs at clubs like Gazzarri’s and the legendary Whisky A Go Go, and eventually climbed their way to the top of the LA music scene. One night in 1976, Gene Simmons of KISS happened to be in the crowd, and he liked what he saw.

Simmons: "I saw them and signed them and flew them to New York and put them in Electric Lady Studios. They were signed to my company, Man of 1,000 Faces. I produced their 24-track demo — 15 songs — which I still own."

After cutting the demo, Simmons showed it to his manager in hopes of getting them a record deal. He was told "they had no chance of making it,” and that was that. The tape sat in a drawer until the following year.

In 1977, Mo Ostin and Ted Templeman of Warner Bros. Records were in the audience during a Van Halen show at the Starwood in Hollywood. Templeman saw the same spark as Simmons. There was something special about Van Halen, particularly in the energy of their live performance. He signed the band to Warner Bros. Records the following week.

The Making of Van Halen

Van Halen was recorded at Sunset Sound in October of 1977 for about $40,000. The album was mostly recorded live in Studio 1 — only "Runnin' with the Devil," "Jamie's Cryin'," "Feel Your Love Tonight," and "Ice Cream Man" used guitar overdubs.

The album was produced by Ted Templeman of Warner Bros. Records, and engineered by Donn Landee. In 2013, Van Halen News Desk interviewed Landee about his time working with Van Halen:

Landee: "They cut 28 tracks in about two hours. That’s when we knew we had a band that could play.”

Templeman wanted to capture the raw energy of their live performance, so they decided to forgo the traditional method of multi-tracking and recorded the band live to tape.

Landee: "We spent very little time in pre-production. In fact, we treated the entire first album almost like it was a demo.”

In 2017, Warren Huart of Produce Like a Pro returned to Sunset Sound with students from the Los Rios Rock School to re-record Van Halen in its entirety. They wanted the record to sound as close to the original as possible, so he dug up the original tracking sheet to recreate the exact microphone set-up Landee used.

The drums were set up in Studio 1 with the guitar and bass amps housed in separate ISO booths. Landee wasn’t picky about the mics they used, almost half of them were Shure SM57-style mics. At the time, Sunset Sound had a number of Shure SM546s, which Huart described as “the budget version of the SM57."

Both kick drums, snare top and bottom, and even the bottom of the toms were miked with similar models. The overheads were recorded using three condenser mics (left, right, and center) to capture the full stereo spectrum of the kit. Here’s the full set up, including notes on the tape machine settings (edited for clarity):

It may be surprising to see such “unconventional” miking techniques used on such an iconic album, but it just goes to show you that there’s no wrong way to make a record.

When asked why the only guitar on the album was panned to the left channel, Landee said, “It made sense, because we didn’t want to overdub guitars. If you put the guitar right down the middle with everything else you’d wind up with the whole band in mono! So it seemed like a reasonable idea.”

Van Halen was released on February 10, 1978, and peaked at number 19 on the Billboard 200. It featured songs like "Runnin' with the Devil," "Ain't Talkin' 'Bout Love,” “Jamie’s Cryin’,” and EVH’s face-melting, finger-tapping debut, the guitar solo “Eruption.” Their debut single, a cover of The Kinks' "You Really Got Me," spent three weeks on the chart, peaking at number 36.

Van Halen caught the attention of every record exec and club owner that had passed the band up just a few years before. It landed Van Halen opening slots on Journey’s US tour that spring and Black Sabbath’s European tour that summer.

Even though Van Halen went on to sell over 10 million copies and was certified diamond in 1996, it was only the beginning. Van Halen would go on to see even greater success, despite the fact that they went through singers like Spinal Tap went through drummers.

Van Halen’s sound may have changed with the times, but Van Halen remains a monument to the raw energy that is rock and roll, and solidified them as one of the most influential rock bands of all time. If you have any questions about the gear mentioned in this blog, we're here to help! Please contact a Vintage King Audio Consultant via email or by phone at 866.644.0160.
Categories: Making Of & Fun Stuff
Posted By: Brad Pack