The Basics of Gain Staging Explained 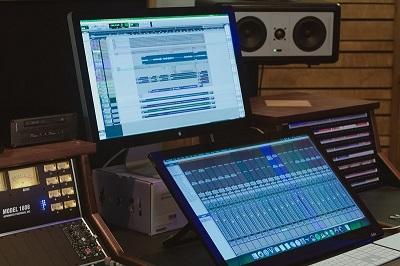 Ever hear the phrase, “You can’t fit 10 pounds of stuff in a five-pound bag?” Well, gain staging is literally the art of doing just that. It’s the process of combing dozens, if not hundreds of channels together, without causing any clipping at all.

There's a finite amount of space in a mix, and it’s your job as the mixing engineer to make sure you fit all of the tracks within that space. That’s where gain staging comes in. But to understand gain staging in a DAW, you’ve got to understand the basics of digital audio.

Digital Audio
Whenever an audio signal is recorded on a computer, it has to be converted to a digital signal. This conversion process directly affects the quality of your recording. Two factors control the quality of digital audio, both of which can be set in your preferences settings — sample rate and bit depth.

To capture a digital audio signal, thousands of samples are taken each second. Then, those samples are played back to create the illusion of a cohesive piece of audio. This is known as the sample rate, and it controls the quality of the frequencies captured. If you’re familiar with the frame rate of film or video games, sample rate is the same concept.

The higher the sample rate, the more samples taken each second, and the higher the overall quality of the recording. The standard sample rate for professional recordings is 44.1kHz/sec, although sample rates as high as 96kHz/sec are available.

Each digital sample is encoded using a specific number of bits of information. This is known as bit depth. Bit depth controls the potential difference between the loudest and quietest sounds in a recording.

Dynamic Range
Dynamic range is the difference between the loudest peak in your recording and the noise floor. Every piece of gear in your system creates some form of self-noise. It may not seem like much on a single recording, but stack 100 tracks together and suddenly there’s a dull roar coming from your mix bus. If you want to be able to hear a sound, it needs to be louder than the noise floor.

Think of dynamic range as the size of the bag you’re trying to cram 10 pounds of stuff into. The bottom of the bag is the noise floor, and the top of the bag is the point at which clipping and distortion occur. The goal is to fit everything into the bag without having to squish anything. To do that, you’ll have to closely meter the signal.

Metering
Audio can be measured in many different ways. Typically, we measure the level of an audio signal in decibels, based on the amount of voltage used to create that signal. Back in the 1940s engineers would use 1000Hz sine waves to calibrate their meters to 0dBVU, which stood for volume units. This was seen as the optimum input level for recording.

Years later, we transitioned to a more sophisticated form of metering for analog consoles known as dBU, which measures the RMS (“nominal") level of a signal. Analog consoles are calibrated where 0VU = +4dBU, which is known as "line level."

Finally, when digital audio was introduced, it came with a new scale for metering digital signals known as dBFS, or decibel Full Scale. Combining the logical benefits of dBVU and the mathematical accuracy of dBU, dBFS has a maximum output level of 0.

Nothing goes above 0dBFS — that’s the loudest a digital audio file can possibly get. Clipping on an analog console adds all sorts of great harmonic distortion, but clipping on a digital system only creates artifacts or unwanted clicks and pops.

If all of these different decibel measurements are confusing to you, try to think of warm weather. No, seriously…

Gain Staging
Now that you know the finer points of digital audio, you can begin properly gain staging and it all starts during recording.

Even though 0dBVU technically equals -20dBFS, most engineers agree that recording with RMS levels at -18dBFS (with peaks as high as -12dBFS) will create the best compromise between headroom and signal-to-noise ratio.

That may seem a bit quiet during the recording process, but remember as you add more tracks, you lose headroom on the mix bus. Sure, you can record “hot" and simply pull the channel faders down to control the level being sent to the mix bus, but there are two problems with that:

Most plug-in manufacturers have calibrated their units to operate with a nominal input level of -18dBFS, which has become standard practice for many engineers. However, some plug-ins (typically tape emulation units) are calibrated at -12dBFS, so it’s always best to reference the manual before using a new device.

If you’re dealing with tracks that were recorded above -18dBFS, there are few things you can do to prevent clipping your plug-ins.

Gain staging is more than just keeping your mix bus from clipping, though. It’s about making sure no one link in the signal chain is overloading.

Five-Pound Bag
By setting your tracks to -18dBFS and gain-matching all of your plug-ins, you should be able to create a dynamic mix without fear of clipping the mix bus. If there’s any room left in your “five-pound bag” when the mix is finished, you can always make up the difference by using a limiter during mastering.

By using proper gain staging, you can create a mix that’s loud AND dynamic — not one or the other. Plus, you can finally prove that jerk wrong about how much you can cram into something!