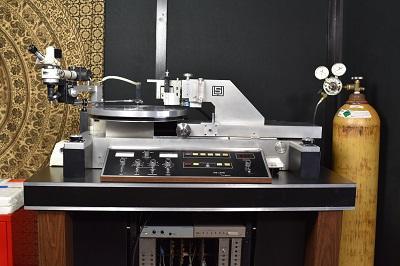 Recently, Infrasonic Sound decided to put their historic Scully LS-76 lathe up for sale. This classic lathe has a unique place in history as its one of the last ever built by the storied brand. Continue below to read an interview with Pete about the importance of the lathe, the technical updates it has received and the role it has played in Infrasonic's success.

If you're interested in purchasing the Scully LS-76 lathe and would like more details, please feel free to reach out to us via email or phone at 888.653.1184.

Talk a little bit about the Scully LS-76 in terms of its historical place in the world of lathes.
Pete Lyman: The LS-76 was the last lathe Scully built, kind of right before there demise. As far as I know from our research, there were nine LS-76s built and this is the first one of that series. Interestingly enough, all of the promo photos used for the LS-76, including shots in the manual, are of this lathe.

This was a totally different direction for Scully. From what I understand, they were basically trying to compete with the Neumann VMS 80. They kind of rebuilt their whole lathe platform from the ground up in an interesting way. A lot of the Neumann lathes have continuity from all of the series, at least up until the VMS 80. Scully did a redesign for this lathe and created an entirely new beast.

For the time in the 70s, the pitch system was really powerful and could pack the grooves together a lot better than other systems out there. All of the controls were digital, so it was pretty easy to use. The functionality was more robust than a VMS 70. They had their tape-based automation that you could use with the lathe to automate the banding and start/stop the record. It was a pretty big departure from the manual style Scullys of the past.

What kind of upgrades have been done on the lathe since it was first purchased by Infrasonic Mastering?
We first bought the lathe from Dylan Constan-Wahl in 2010. The guy is an amazing genius and has done a ton of work on the lathe in the time since. A couple of years ago, we had a power fault in the original power supply that basically fried quite a bit of the lathe. It was just one of those poorly designed power supplies, there was no sort of safety or breakers.

We flew Dylan out from Michigan and he lived here for a couple of months and pretty much worked on the lathe 15 hours a day. He was rebuilding it and had to reverse engineer a couple of things, but he improved a lot of it. The power supply was completely redesigned. Also, he designed a breaker system in the power supply, so if there was ever a fault again, it wouldn't hurt any of the cards.

He also went into all of the cards and added sockets for all of the surface mount components. For the late 70s, there was a pretty complex computer controlled pitch system on the lathe that used a lot of surface mounts IC. Now, none of the audio runs through that path, its just to control the land and the pitch and how close the grooves get together. The signal path is entirely discrete on this lathe.

How has this Scully lathe been a part of the history at Infrasonic?
We've cut thousands and thousands of sides on this lathe that have pressed millions and millions of records. We've done a lot of cool records like the [Chris] Stapleton record. Everything we've done since 2011 has been done on the Scully.

It's been a really fun lathe to work on and we're really happy with the upgrades Dylan did. Sonically, the updates he did on the VG60 rack, I would put those racks up against anybody's system and say its one of the best sounding cutting systems currently running. We've constantly beat sonic shootouts with other mastering houses for records.

What about this lathe will make its new owner very happy?
If you're looking to get into a lathe, they are a labor of love. They require constant attention and tweaking, but this is a lathe that was decommissioned when it was still cutting production masters. The new Chris Stapleton record was the last thing cut on this lathe before it was decommissioned. It's a fully functioning lathe. Anyone that wants to buy it is going to make their own tweaks like you would with a tape machine, but this is a fully functioning, turn-key system.

Are you going to miss this lathe when it's gone?
There is a lot of personal history with us here and that lathe. It was a real exciting lathe to purchase and it has been a workhorse. There were times when the lathe was operating from 7 in the morning until Midnight, five/six days a week. It's a solid lathe and I really love how easy it is to use. It's been a great lathe for us.

To see Pete at work and learn more about Infrasonic Sound, watch our Make Your Mark video below.