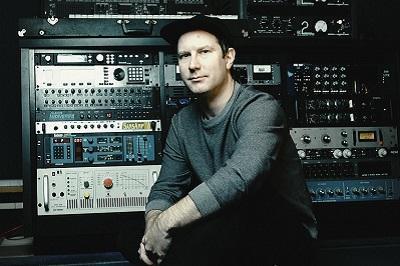 The studio is a constantly evolving place as new innovations and old favorites can always be used in their own distinct ways. In our new series, Exploring Workflow, we spoke with three creators about three differents styles of working; hybrid, in the box and analog. Continue below to read Part I of the series with Chris Coady. Follow these links for Part II with Mark "Exit" Goodchild (DJ Khaled / Justin Bieber) and Part III with Mitch Easter (R.E.M. / Game Theory).

Starting his career with a project studio in Baltimore, producer and mixing engineer Chris Coady would eventually land in New York at Quad Studios in Time Square. "I spent several early years working on only SSL G and J series consoles," Coady says. "After leaving that studio and going freelance I tended to prefer working in SSL studios, especially for mixing."

How did you develop the kind of hybrid workflow that you currently use in the studio?
It was becoming clear that the job of a mixer was changing and that keeping up with clients revisions and being able to multitask became key. Working on the consoles became more and more costly and stem printing was eating up a lot of creative time. The sound of the console was preferred but less important than the artists being able to see through their vision of the mix which relies a lot on trial and error. A few mixers that I respected and looked to for inspiration had either gone hybrid or entirely in the box with great success in this way. I decided that in order to adapt to a modern workflow and keep the vintage gear that I loved and depended on that hybrid was the solution.

If you could, describe what your current set-up is like in the studio.
I have a couple of racks of vintage compressors and EQs and also a good collection of hardware reverbs. The centerpiece is both the Pro Tools system, but also a Shadow Hills Equinox which I use to sum the final stems down. I group instruments in Pro Tools so they fit through the Equinox’s 32-channels. Additionally, I use hardware inserts in Pro Tools so that patching can be flexible and instantaneous. I run hardware compression live, but often I print the reverbs if they are vintage because some of them can break down. If you hear a big vintage reverb in one of my mixes, most often it’s a recording of it on an adjacent audio track. However, the Bricasti reverb is run live and returns to two channels on the Equinox.

When you're considering buying something to use in the studio, how do you decide between a physical piece of gear or a digital version?
Well I definitely use hardware for tone coloration and for broader strokes where the plug-ins are for more detail oriented work. There are plug-ins I like the sound of, but mostly they all sound the same to me. With hardware, I can broadly define a subgroup. When I buy a piece of hardware gear it will live on a hardware insert for a while and I will try it out on a bunch of sources until I find a place for it… I usually buy a new plug-in if it seems like it does a job better than a plug-in I already have. I use an EQ for a while for boosting and if one comes along that does boosting better then I switch it out.

How much does the gear used in your workflow change based on if you're recording or mixing?
I don’t use much of my mixing setup while recording. I just use the computer so I can get the best possible sound with the least amount of equipment behind that sound. One exception to that is I print a lot of hardware effects while recording so that I don’t have to do it later. Some mic pre/EQs like Neves get used as a front end while tracking but when I am mixing I will put them on a hardware insert of the stereo bus sometimes. Changes from day to day.

What is it about this style of working that makes it beneficial for working with your clients? What makes this style of working enjoyable for you?
When I mixed on consoles every day there was always a feeling of tension in the air. Almost always there were regrets that we should have done things differently on the previous mix leading to a pretty heavy vibe in the studio. Switching to working in the box or with the hybrid setup has enabled me to provide a service to artists where the mix will come out as good as we can possibly make it… Not just as good as we can make it by the end of the day. It makes for a much better atmosphere around the studio and people leave happier with their album and ready to share it.

What are some common misconceptions about working a hybrid method that people might get wrong?
Well working this way adds a level of complexity to the mix process that is deeper than just an in the box setup. You have to take analog conversion and multiple gain stages into account. Also, you can’t do any offline bouncing with hybrid because the equipment is run live. Everything has to be done in real time in terms of printing. I haven’t tried any other summing systems but this one seems to get the job done and has a nice sound. When I just hit play and compare a clients rough mix to basically the same mix through the summing system it already sounds better to me. It especially helps with giving you more width and depth to place things.

Recording and mixing spaces have come so far. Where do you see this all going in the future?
I couldn’t have predicted that Pro Tools would take over recording back in the tape days… I couldn’t see it. This era’s biggest breakthroughs seem to be in increasing the quality of the plugins. Switching to this new system of mixing has been so rewarding that I am really excited to see what people come up with next.

Continue onto Part II of our series, Exploring Workflow, to learn more about working in the box from engineer, mixer, and producer Mark "Exit" Goodchild (DJ Khaled / Justin Bieber).