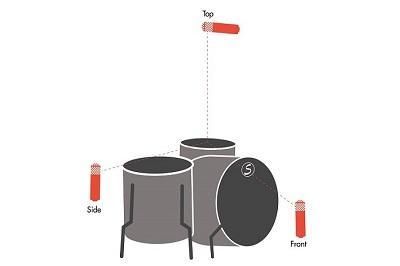 When Vintage King was just starting to grow, my brother, Andrew, and I would have access to some amazing gear for recording our group, Robert Bradley’s Blackwater Surprise, on RCA Records. We’d use the Glyn Johns' three-mic technique when recording drums in the studio and live on tour.

In the studio, we’d place one tube U47 just above the drummer's head, over the snare, and the other to the side of the floor tom pointing at the snare/hi-hat. The U47FET was placed just outside the kick with the front skin on. We’d spend a good deal of time tuning the drums and working the mic positioning to create the perfect drum mix. When combining this mic placement with the right amount of compression and a drummer who understands how to lay back a bit and play to this recording style, it became really easy to get the big drum sounds with the depth we wanted to achieve.

When playing live, our group would also use this miking technique, even when doing arena shows with Dave Matthews Band, The Allman Brothers and on the H.O.A.R.D.E. Festival tour. We would shock skilled FOH engineers when they'd see us confidently position just three mics on the drums. We would place the microphones further away from the drums than they were used to seeing live, using an AKG D20 on kick and two Beyer M160s in the overhead and side position.

Their first thought was... FEEDBACK! However, once they'd give it a listen, it blew them away how big and natural the drums sounded and that there was no feedback at such a loud volume in a live setting. Sure enough, we soon saw others using the Glyn John's technique on drums live.

Check out two examples of tracks from Robert Bradley's Blackwater Surprise where we employed the Glyn Johns' miking technique during the recording session.

Robert Bradley's Blackwater Surprise "Once Upon a Time"