Make Your Mark With Joe Costner of Spartan Recording 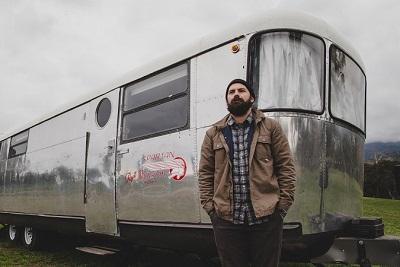 We all follow our own path into making the sounds that we love. For budding engineer and producer Joe Costner, he forged his own way by rebuilding a mobile trailer from the ground up and learning to record music in a completely different way.

"I said, 'I want to do this,' and I fucking went for it like nothing else in my life," Costner says reminiscing about coming up with the concept for Spartan Recording. "I spent a year and a half building this, designing it, did every single cut of wood myself and measured everything myself. I really went for it."

With some help from Robert Alexander at Vintage King Los Angeles, Costner transformed a vintage Spartan trailer into a mobile studio space and outfitted it with some incredible gear including a Solid State Logic XL Desk. Watch our brand new Make Your Mark on Costner and Spartan Recording to discover more about the renovation of the trailer, the process of recording in a mobile unit and how the XL Desk has impacted his workflow.

What are some of your earliest memories of music?
It was definitely my mom and dad playing music. I remember they used to play Phantom of the Opera in the living room and they used to play Simon and Garfunkel. I found later on that one of my biggest influences of falling in love with music was Led Zeppelin. I got into vinyl records because you have to play Zeppelin on vinyl. That's the only way to listen to it. It was like "This is how music needs to be heard. This is how music needs to sound. This is epic." It's no surprise that I liked that because Zeppelin went off to the countryside and used a mobile studio too. Those guys were kings.

When did you first start getting into recording?
I got a two-track recorder interface when I was 17-years-old that plugged into my laptop and I used that interface to death. I shouldn't have been using it as long as I did. I probably used it until I was like 25-years-old. I'd go do other recordings with friends who had mixers and other different set-ups with pre-amps, and it made me realize I wanted to have more mic inputs. I didn't want to be limited to just two tracks. I knew exactly what I wanted. I wanted to have as many tracks as I possibly could.

What made you want to go further down the path of becoming an engineer rather than playing in a band?
Recording to me is a journey. You've got ups and downs, there is compromise, there is intense decision making and, in the end, there is a huge sense of satisfaction and gratitude. It's like you, your band, the engineer, the assistants, you've all gone on this journey together. Every decision you've made throughout that whole process led you to the end goal and, whatever that goal is, hopefully it's exactly how you pictured it. I went on that journey when I was 17-years-old and I wanted to keep having that experience. The idea that people can keep writing songs and keep having that experience is so exciting.

What made you decide to go with the Solid State Logic XL Desk for the trailer?
When I got this guy, it changed the game. It has helped me, especially with setting up this rig; integrating patch bays, getting 500 Series preamp modules, getting the headphones run and all the outboard gear. It really helped me understand the recording process in a way you can't really understand unless you put your own system together yourself. This desk has helped me become a better engineer. I know that not everyone gets to put their own system together, so I'm extremely grateful that I've been able to do that.

What were some of the features of the XL Desk that drew you to it?
The thing that drew me to the XL Desk was the ability to put the 500 Series outboard gear into the desk and have it all be in a compact space. You have it all right there in front of you. I was limited with space in here. Not only did it feel like it was conserving me a lot of space while still giving me the option to have amazing gear on-board, but it was a very simple console to learn on. I feel like any engineer can come in here and start working in a matter of minutes.

Also, I think the VHD pres are great. You don't really need much more. I do all the drums on my VHDs and it sounds amazing. It's a really uncomplicated pre, you throw the gain up a bit and it just sounds incredible. I usually track the other instruments on a combination of the VHDs, the Chandler pre and the few Neves I have. I'm fine using VHDs across the board though, I think they sound great.

What made you choose an analog desk like the XL Desk over a smaller digital work surface that might give you more room in the trailer?
If you're building a recording studio in a trailer from 1951, a collectible trailer, you're going for that old school vibe and look. There was no doubt in my mind that I wasn't going to go the complete digital route and that I wanted to do it with an analog console. I also wanted to have the option to put a tape machine in here and go full analog. It just felt right. I wanted to have as much analog hardware in here as possible.

The beauty of the trailer is that you can take it all over, but you also have the beautiful space where we are at right now that you can always record at. What does this land mean to you?
The trailer is currently in Santa Barbara and it sits on some land that is right on the ocean. There is a beautiful view of the Channel Islands and there are a couple small houses on the property. There is a surf break right out the window and if you go down about another quarter of a mile there is another one. So you can go surfing or take a walk down the beach and come back and just go right back to recording. This place is really special. It feels like a spiritual place and it feels fitting to be recording here. It's not just that we can record so close to the ocean, it's that we are able to do quality recording here. It means so much and I don't take it for granted.

What records have influenced this organic approach that is centered around being one with your surroundings?
There's this guy, Nick Hakim. He did a record called Where Will We Go, you can hear floorboards in the background when he's singing and you really get a sense of the environment he is in. It's one of my favorite records. You get a sense when you're listening to his music that you are in that space with him.

I love the idea of wrapping the sounds of whatever location you're in into the sounds of the record. Something like a floorboard creak or your foot stomping on the ground or tapping on the wall and maybe it bleeds into the drum mic. Maybe there's a bird outside you can hear. It gives life to the recording and that's something I try to emulate with all the recordings I do.