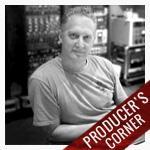 New York-based mix Engineer Michael Brauer has worked with the who's who of classic rock. While working on records for Bob Dylan, Paul McCartney and the Rolling Stones may be among his career highlights, Brauer isn't stuck in the golden age of rock 'n' roll.

Continuing to work on significant projects in the 2000s, the transition to more modern pop seems to have been a simple one for Brauer. From Pitchfork lauded artists like Twin Shadow to jam rock giants My Morning Jacket, the Grammy award winning mix engineer has put his sonic stamp on music scene of the new decade.

"I love to search for old toys. The hunt is as much fun as the capture," Brauer says of his love of finding vintage gear. "I did try to stop about two years ago ... I felt like the collection was complete and my assistant assured me, in fact, begged me to stop the insanity. I tried it for three months but that good ol' feeling came back. So I got rid of him and got me a brand spankin' new assistant and a second assistant to make me a custom set of recall sheets that made life good again."

Vintage King asked Michael to select ten pieces of his favorite studio equipment. "Yeah right! I quit. How is that possible? I own about 115 toys and I have to pick just ten," Bauer stated. Culled down from his giant master list, here are Michael Bauer's top ten pieces of recording equipment.

1. Empirical Labs Distressor
It's been several years since David Derr came out with his flagship compressor. It makes it to #1 because it is the most versatile of all the compressors I've ever used. I often use them across my drums and vocals. I can make the vocal extra present using the opto setting with the British mod or I can make a weak vocal sound urgent with the quicker 1:1 setting w/ British mod and get the orange led's lit nice and bright.

David was an engineer and a designer for eventide before he went out on his own to start Emperical Labs. He loved 1176s, La2a's, DBX 160's, Neve and Fairchilds so he designed something that had the spirit of each unit all in one box. It was a brilliant idea that worked. Many compressors are "one-trick ponies" because they have only one use in which they shine.

Distressors are like chameleons blending into their surroundings. There is the "nuke" setting which does just that or the gentle warm opto mode that simply strokes the sound. I think it's the greatest compressor to come out in the last twenty years and will in time be as legendary as the classics of years past.

2. Universal 1176
What's not to like. This is the workhorse of the industry. The most powerful compressor of them all. You can use it on any instrument and it'll do the job of making the drums sound punchy, the vocal sound stressed, urgent and contained if you choose, the bass pop, the drum room explode, the guitars drive, the piano harmonics shimmer. It's very colored in sound and doesn't have the high bandwidth sound of the newer compressors but who cares. When I go into a studio to mix a record without my racks, I make sure there are 4 of these in the room.

3. Federal Compressor
I love the sound of this unit. I use it as a send return for bass and vocals mostly but it has a great lower mid range clarity punch that puts a great vibe to my mixes. Love it , love it , love it.

4. EAR 660
It'll add a growl to a bass and make it fill out the bottom end of record in a way that I don't hear in other compressors. It also adds great warmth and presence to vocals or acoustic instruments. Transformers are hand wound. I don't know if it sounds like a Fairchild 660 but I didn't buy it with that in mind. It's just a great compressor.

5. Sony Dre 777 Reverb
I rarely use any other reverbs outside of what I have in this box. It has two engines. I've sampled a bunch of verbs and sounds from other toys into this one. I had the guy who made all the sample CD's go to Wessex studios, before it closed, and sample the room. Nothing in the digital world of reverbs sound more natural to me. I bought the unit when it first came out and, as usual with expensive reverbs, it now sells for a third the price.

6. Dept of Commerce
It's a one-trick pony but what a ride! I had it modified so that it gave me more bandwidth but that's all. It's vicious. But it can be used in a way that puts a vocal right in your face. I used it a lot on Aimee Mann's "Lost in Space" record. It was perfect for getting her up and in your face.

7. SPL Transient Designer
It's an important tool that has helped me out of a jam on many a mix. I don't know how they did it but they should have won the Nobel peace prize for the peace of mind it gives me after transforming a roomy BD into a close mic'd tight sound without any of the tricky phasing stuff going on. It's a total mystery how that works, It also works in the reverse, meaning it puts verb into a sound that is too tight and close mic'd. Great tool.

8. Fulltone Tube Tape Echo
My assistant, Will turned me on to this one. He's a guitar player and is familiar with the Fulltone foot pedals. I was having trouble with my Echoplex so he suggested I buy this unit. It's great! In fact I haven't used my Echoplex since hooking up the thing. I mostly use it as a send return for my lead vocal. I can enhance the tube sound by bringing the return up a lot and then dial in the level of vocal delay and repeats to my liking. Unlike the Echoplex, it offers a slow speed so it doubles up on the delay time. It was very well designed and built to withstand abuse.

9. ADL 670 Stereo Tube Limiter
We didn't have Fairchilds at Mediasound (where I trained to become an engineer) so I wasn't familiar with the sound. It was used all over records that I was listening to during it's hay day. The music would pump in a glorious way on the bottom end. Drums would be kicking ass yet the meters didn't pin. I didn't know at the time that the 670 was so instrumental in getting that sound.

Anthony de Mario spent a lot of money and a long time R&D'ing the unit to make an exact duplicate of the Fairchild 670. Several copy 670's have been released over the past several years but this is the one I like best. It's a bit punchier and not quite as dark as the original but for today's music, that suits me fine. I spoke with a couple of people that I consider kings of the Fairchild 670 and they gave the ADL their blessing.

I had a certain sound in my head for months and I was unable to reproduce it from the millions of compressors I own. I can hear tiny violins in the background, poor little me...no really, I do hear them, I better get that checked.

Anthony built only five units. He had one left when I called him. He let me play with it for a couple of weeks, the bastard. After trying it for a week, I wasn't sure if it was the sound I was looking for. I decided to really pump the fu**ker up one day and in the process I realized that it automatically does it's own gain makeup so as I add compression it adds gain to bring me back to unity. (I come out of the main L/R of the desk into the 670, then directly out into the two track machine). Damn! The monster woke up and I'm out eighteen grand.

It pumps like no other toy I've ever heard. Fell in love with it, had to have it. First time I used it is on the Athlete CD "Tourist". Check it out.

10. Ensoniq DP4 Processor
It has up to four mono engines. I format it as two stereo engines. I've made so many cool patches in that box that it is always my go-to box for cool effects on vocals, guitars, drums etc.