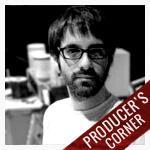 “My philosophy is that the song informs my methods of recording and mixing, and dictates the sounds we capture in the process," says producer Ryan Hewitt. "I want to be known as a chameleon, working on music that inspires me to try different palettes in order to paint an appropriate sonic picture for the artist’s song.”

This desire to work on diverse musical forms using methods apropos to the artist is evident in Ryan’s discography. He is as comfortable mixing major label radio singles as he is producing a jazz record. Throw in traditional Irish instruments, cutting edge indie bands, legendary blues artists, down home country singers, classic rockers and eclectic guitar players, and you get a picture of the wide eyed enthusiasm Ryan has for music as a whole.

Ryan has garnered a robust career working with client such as: The Alkaline Trio, The Automatic Automatic, blink-182, Buddy Guy, Eulogies, Flea, The Heavens, Jimmy Buffet, John Frusciante, Three Days Grace, Tift Merrit, Tom Petty & the Heartbreakers, We Are Scientists and many more.

Check out this list of some of Ryan Hewitt's favorite pieces of gear and how he likes to use them in the studio:

1. UREI 1176 Blackface
The original one. It's the single greatest compressor ever. I'd like a whole rack of these one day...

2. Tonelux EQ
Essential for mixing other people's recordings. Surgical, but with vibe.

4. Empirical Labs Fatso
In a digital world, like a nice scotch; mellows your world.

6. SPL Transient Designer
Everyone needs one of these.

8. Audio Ease Altiverb
When you can't have a collection of the greatest reverbs, rooms, chambers and effects units in your room at the same time, this is the greatest invention ever!

10. Tape
I love tape. Nearly all music sounds better when it hits tape. I like to track to tape, but that's not an affordable option with budgets the way they are, so mixing to tape is one of the only saving graces these days. 1/4" 15ips can sound amazing!