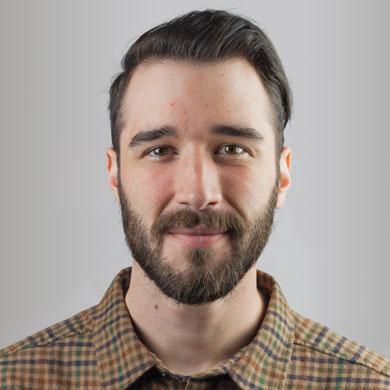 On his 10th birthday, Alex St. Cin was given The Strokes' debut album, Is This It, and his life was changed forever. The budding guitarist couldn't think about anything except for how five New York 20-somethings made this incredible rock'n'roll record.

"I was obsessed with figuring out how to record after hearing that record," Alex says. "I bought a Tascam four-track cassette recorder from Goodwill, and the rest is history."

Alex would eventually go on to open his own studio, Lighthouse Sounds, with some of his best friends in Alton, Illinois. Working as an audio engineer at Lighthouse, Alex began to develop a deep-seated knowledge of pro audio gear, one that would endear him to helping others develop their own sound.

In his new role as an Audio Consultant at Vintage King, Alex is once again working to realize the sonic vision for his clients. His approach is that nothing has been perfected and that there always may be a better answer for figuring out any situation the studio may throw at you.

"Every time I think I've found the "perfect" way to do something, I discover a better or more interesting way," Alex states. "The key is to never stop learning. There are no masters in this field, just a group of like minded people who may or may not do things differently than each other. Every technique is valid in its own way."

What piece of gear has changed how people work in the studio the most?
The DAW, without a single doubt. I can't think of a single piece of gear that has made recording more accessible to such a large amount of people.

What is the most inspiring part of the recording process, for you?
For me, there is no one part of the process that I value over another. It's all accumulative. Every aspect contributes to the final product as a whole.

What is the most important piece of recording or production advice you've ever received?
Try something new on every single session. Whether it's trying a mic on a source you've never used it on before or some weird effect trick that you saw online and have been itching to try out. Don't hesitate, just do it. You could discover something you love that you use on every session after, or you could discover something you hate and have to find a way to fix it. Regardless, It will be a learning experience. NEVER STOP LEARNING.