Vintage King Marketplace Special Access
Your Resource for Exclusive
Pricing on the Best in Pro Audio You are logged in and shopping with special discount pricing
Limited Time! 0% Financing Up To 48 Months On Select Brands. Learn more.
Best Seller

$ 3,130 .25
Your Savings: $ 164 .75 Msrp: $ 3,295 .00
No interest if paid in full within 12 months Learn more
More On Order
This product is in high demand and we are shipping as many orders as we can. Place your order today to be included in the earliest possible shipment. Order now and we'll ship when in stock from one of our three fulfillment centers. 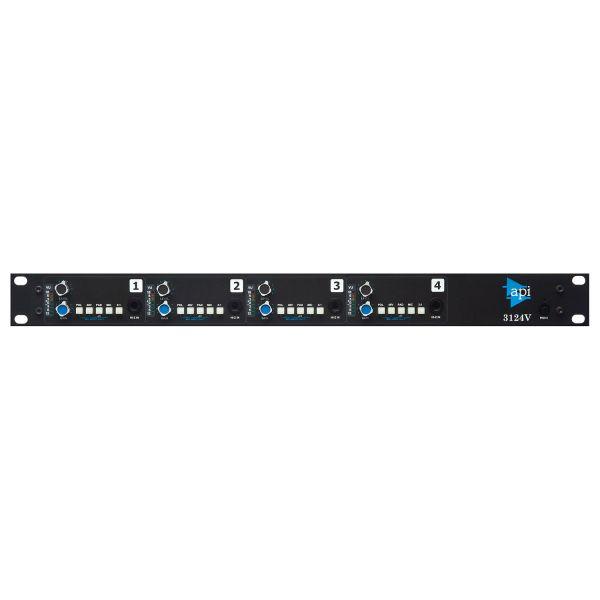 Since the 1960s, API has provided high quality, discrete, studio grade pre-amps. Their punchy sound is highly preferred by audio professionals on drums, rock guitars, bass, vocals, or anything that needs a little attitude. There are over 700 API consoles in leading recording studios and broadcast facilities around the world, now with the API 3124V you can get that same pro sound, without buying the entire console.

The 3124V has four discrete microphone pre-amps, the same preamplifier found in all API consoles. The microphone preamp can give you up to 65 dB of gain, where the Hi-Z input patches directly to the Op-Amp, allowing line level signals such as an electric guitar, bass, or keyboards to be plugged directly in without the use of a direct box.

On the front panel, each channel is equipped with a VU meter, gain control, phase polarity button, 48 V Phantom Power button, 20 dB pad that works on the mic and line inputs, mic/line selector, and the Hi-Z 1/4" input. The rear panel has XLR inputs and outputs for each channel. The 3124V also features Variable Output Control and switchable 3:1 output transformer selection.

Loved it so much, had to buy a 2nd. Wonderful on live drums.

Please fill out the form below and a Vintage King Audio Consultant will contact you with a ship date for the API 3124V 4-Channel Microphone/Line Preamp.

Have a better price in mind for the API 3124V 4-Channel Microphone/Line Preamp that you've been checking out? We're willing to work on it!Please fill out the form below with your contact information.Once the form is submitted, a Vintage King Audio Consultant will contact you as soon as possible with our best price on this product.