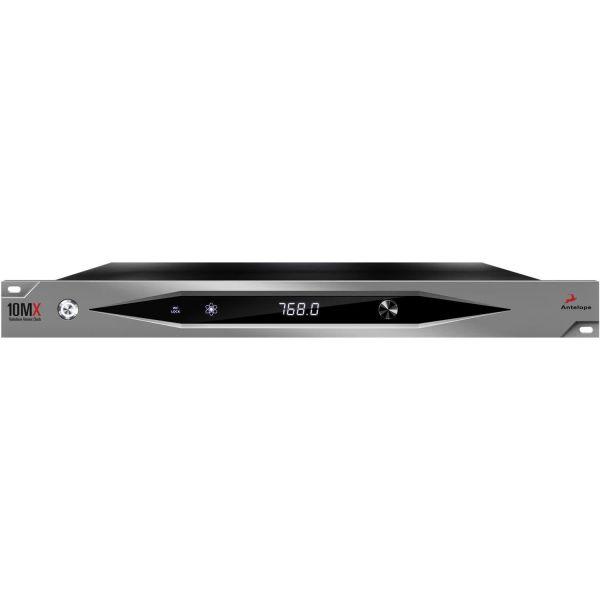 Perhaps no other product in the modern studio world has defined the high-end better than Antelope's original 10M Atomic Clock.  The Antelope Audio 10MX continues this legacy in fine fashion by offering even more on-board 10MHz outputs and also now can output standard word clock rates, as well, up to a remarkable 768KHz.  10MX also features a new smaller atomic oscillator, which allowed Antelope to reduce the size of the 10MX to only 1U rack space at a fraction of the weight of the original 10M.  This newer oscillator and updated power supply offer even better sonic stability allowing for even better sound than ever before.  10MX also features a new software control panel for remote control of the 10MX clock rates and display brightness.

"I have been so happy with my 10M clock that the last thing I wanted was a new clocking system.  Marcel (from Antelope Audio) kindly brought the new 10MX clock to my studio and it was a perfect time ear-wise as I was in the middle of a mix project.

I listened hard and intently to the first verse until the end of the first chorus on my 10M. It took Marcel several seconds to switch the system over to the new 10MX clock, and then I hit play on the same section of music.

I was quickly struck by how much more tone and note I was hearing out of everything. The song starts with acoustic guitar and a sidestick snare drum. It wasn't more low-end level that I was hearing, it was simply more of the music. The sidestick had more wood in it.  The vocal entered on the first verse with such perfect framing and confidence. All the high-end detail was still beautifully intact, yet a harshness that I didn't realize was there had now gone away.  It felt like I was hearing undertone harmonics that I'd never heard out of my Pro Tools system.

It's hard to quantify and communicate why we like music a certain way compared to another, but 2 comparisons come to mind to describe what I noticed on the new clock.

It's not dissimilar to the feeling I have when listening to Kind Of Blue from a high bit rate digital file and then putting the vinyl album on a great turntable through the same speakers.  In both scenarios, there is a depth of field and musicality that I wasn't hearing before.  There is simply more of the note. More tone. My ears feel more believability and trust. I enjoy listening more.

The second comparison is a visual one. Like so many things in life, once you experience a better version of the thing that you are used to, it's hard to turn back. When I finally upgraded my camera situation to something serious and then saw the difference in the photos of my kids, there was no turning back.

I am always skeptical of anyone describing musical equipment as being better, or the best. It's something you need to hear with your own ears, but I know I can't live without making the new clock a part of my daily work life.  It is as important to me as what microphone I have on the lead vocal. It's unbelievable what clocking done right can do for your music."
- Greg Wells, multiple Grammy nominated musician, record producer and songwriter

“The difference was pretty incredible, I heard it with my own ears”.  Also he said “The sonic picture got clearer, there was less distortion in the top end.  It had less hash that I always contributed to lower sample rates, but I guess not, it was always due to the clocking.  I’m very impressed with 10MX.”
- Mick Guzauski, multi-platinum mixing and sound engineer

"I didn't think it was possible to improve the 10M and Trinity combination. I was reluctant to even listen. Yet, Antelope has done it! Again. The 10MX clarifies every nuance of sound and delivers an impact like you have never heard before”
- Brian Vibberts, multiple Grammy Award winning recording/mixing engineer

"Pure 2 + 10mx has improved the performance of all my digital gear in the room.  Feels like a sheet has been lifted off my speakers.  Can really hear the space in the delay and reverb decays.   Definitely been leading to betting mix decisions.  My analog gear is happy too, with an A/D that's truly worthy."
- Chris Godbey

Let's you hear things you normally couldn't hear with "regular" clocks. You can actually hear how low your 808's go! Worth the investment

Please fill out the form below and a Vintage King Audio Consultant will contact you with a ship date for the Antelope Audio 10MX Atomic Clock.

Have a better price in mind for the Antelope Audio 10MX Atomic Clock that you've been checking out? We're willing to work on it!Please fill out the form below with your contact information.Once the form is submitted, a Vintage King Audio Consultant will contact you as soon as possible with our best price on this product.