$ 950 .00
No interest if paid in full within 12 months Learn more
PayPal Credit, Express Checkout and Pay in 4 available.
In Stock
Item is in stock and will ship the next business day. Place your order before 4:00pm ET Mon-Fri and we will ship your items the same day. 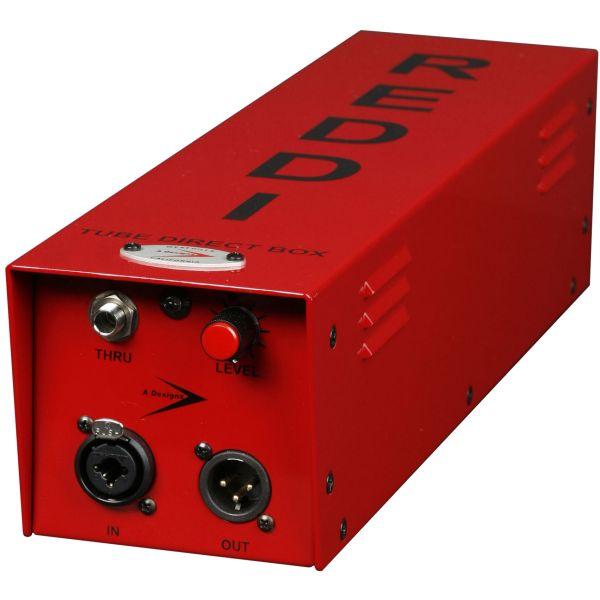 Designed and built by former career studio bassists, the A Designs Audio REDDI has been hailed by engineers and bassists alike as the best-sounding DI around. Inspired by the glorious sound of the Ampeg B-15 tube bass amp, its 6N1-P tube-driven amplifier feeds signal directly into a hefty custom output transformer, which is key to providing a harmonically rich tone. Its wide-bandwidth design from 20 Hz to 60 kHz reduces in-band phase shift, which results in greater detail and realism in the audible spectrum. Another big plus of its wide-bandwidth design is the prevention of LF phase shifts by maintaining a linear response extending below the audible bass range, which is the secret to achieving a big, full sound.

Complimenting its distinctive bright red steel chassis, the A-Designs Audio REDDI has a front-panel Neutrik XLR/1/4" combo input jack, balanced XLR output, and a 1/4" thru-put, for those who desire the reassurance of sending signal to a bass amp (before they wind up discarding the miked track and go with the REDDI track alone). There is also a 0-16dB-gain control on the front panel as well. Take note, the REDDI is not a high-gain device. Gain has been carefully designed and controlled in order to avoid the slightest compromise to sound quality. Finishing up the front panel is an extremely bright blue LED power indicator. The exceptional brightness of the LED was intentionally provided for easy visual confirmation that the REDDI is powered on, and also to temporarily blind annoying A&R reps lingering in the control room. On the back panel are toggle switches for power and ground lift, along with the REDDI’s IEC power connector.

Not just for bass, the REDDI’s all-tube circuitry can enhance the character of any instrument run through it; with an airy top end to go with the full, rich mids and bass it also imparts. That’s why Grammy-winning producer Ted Perlman (Chicago, Bob Dylan, Burt Bacharach, Elton John) runs all his guitars through the REDDI. The ever-increasing list of world-class bassists and engineers who rely on the REDDI includes notable bass players, such as Reggie Hamilton, Justin Meldal-Johnsen, Viktor Krauss, Jamiroquai’s Paul Turner, Steve Bailey, Don Boyette, Carlitos del Puerto, and Millard Powers of Counting Crows; along with producer-engineers such as Tony Sheppard, Dylan Dresdow, Ross Hogarth, Billy Bush, Ronan Chris Murphy, and Russ Long.

THE Greatest DI for electric guitar and bass. It sounds so pure. I can really notice the subtlety of tone between different pickups and combinations switching between them. The tone is bell clear with gorgeously rounded transients. Great as a foundation sound for pickups. A secret weapon.

Please fill out the form below and a Vintage King Audio Consultant will contact you with a ship date for the A Designs Audio REDDI All-Tube Direct Box.

Have a better price in mind for the A Designs Audio REDDI All-Tube Direct Box that you've been checking out? We're willing to work on it!Please fill out the form below with your contact information.Once the form is submitted, a Vintage King Audio Consultant will contact you as soon as possible with our best price on this product.