$ 399 .99
No interest if paid in full within 12 months Learn more
Special Order
Note: This item may not be returnable or could require a restocking fee. Contact one of our Audio Consultants for more details. Due to the special nature of this item, we order each unit fresh from the factory, exclusively for you! Lead times may vary so please chat, call or email for up-to-date inventory status.

16-track, recorder, interface, and controller
MFR# ZR16
Shop All Zoom
Skip to the end of the images gallery 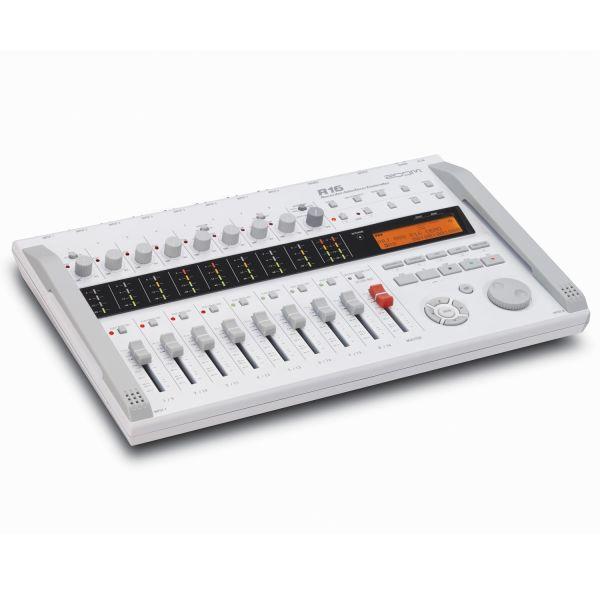 The Zoom R16 instantly transforms any environment into a recording studio. Not only does it offer 16 tracks for recording, it can also be used as a DAW control surface and audio interface, allowing you to craft great-sounding music both at home and wherever your travels take you. The R16 has it all: built-in stereo condenser microphones, 8 mic/line/instrument inputs for connecting external gear, a whopping 135 onboard DSP effects—even a chromatic tuner.

Multitrack recording has never been easier

The R16 provides sixteen tracks for recording and playback (up to eight tracks can be recorded simultaneously) in full fidelity WAV format, making it ideal for both professional production and for use as a musical sketchpad. Battery operation allows for field recording and enables you to capture your musical ideas quickly. You can connect external microphones or line-level sources directly to the R16, or use the built-in stereo mic pair for minimal setup. You can also plug instruments such as electric guitar or bass right into the R16. When your multitrack recording is complete, you can use the R16's internal mixer, complete with real faders, equalization, panning, and 135 built-in DSP effects—including amp models and mastering effects like multi-band compression—to create a stereo mix with studio-quality sound.

If you use DAW (Digital Audio Workstation) software, you probably love mixing in the box but hate mixing with a mouse. The R16 provides the perfect solution. Its Mackie Control emulation enables the R16 to act as a full-featured control surface for popular DAWs such as Cubase, Logic, Ableton Live, and Sonar, adding physical faders and transport/status buttons that streamline the process of creating the perfect mix. In addition, five assignable function keys allow you to set marker points and initiate advanced editing operations.

The R16 offers eight inputs on combo connectors which can accept either XLR or ¼" balanced or unbalanced cables. All can handle mic- and line-level signals, and Input 1 can also handle instrument-level signals from passive or active electric guitars and basses. Phantom power of +48 volts can be applied to Inputs 5 and 6, allowing the use of external condenser microphones. There are dual balanced ¼" TRS output jacks and a headphone output with a dedicated volume control.

135 studio-quality DSP effects are provided, including insert effects such as equalization/dynamics processing and send-return effects such as reverb, delay, chorus, flanging, and phasing. In addition, there are guitar amp, bass amp, and mic preamp models, as well as effects specially designed for use on vocals and stereo instruments such as electronic keyboards, plus mastering algorithms such as multi-band compression. Effects can be applied during recording and mixdown, or can be used for playback only.

The R16's USB port allows it to send and receive digital data and to act as an 8-input/2-output interface for DAWs such as the included Cubase LE. All level meters and the onboard chromatic tuner remain fully operational when using the R16 as an interface, and when operating at a sampling frequency of 44.1kHz, input signal can be routed through the R16's onboard DSP effects. You can even synchronize two R16s via USB for 32 tracks of playback and 16 tracks of simultaneous recording.

Just 6 AA batteries—either alkaline or rechargeable NiMH—are required for power. Battery life when using alkaline batteries is more than 4.5 hours, even during continuous recording. Alternatively, you can use the included AD-14 AC adapter, which allows you to power the R16 from any standard wall socket. The R16 can also be powered via USB when connected to a computer.

The R16 records directly to SD cards, with support for both standard SD and SDHC cards up to 32 gigabytes, for a maximum of 100 track hours. Using SD media for recording ensures increased reliability and means that you never have to be concerned about hard drive failure.

State of the art editing with every multi-track recorder

The Zoom R16 comes with a free download license for Steinberg’s Cubase LE music production software, providing not just the ability to capture incredible audio in every box, but to do spectacular things with them.

Take your recordings to a more professional level. Steinberg’s powerful and state-of-the-art audio software used by creators around the world now comes with every Zoom R24, R16, and R8 purchase.

Here's what comes included with the R16:

Please fill out the form below and a Vintage King Audio Consultant will contact you with a ship date for the Zoom R16 16-Track SD Recorder / Interface.

Have a better price in mind for the Zoom R16 16-Track SD Recorder / Interface that you've been checking out? We're willing to work on it!Please fill out the form below with your contact information.Once the form is submitted, a Vintage King Audio Consultant will contact you as soon as possible with our best price on this product.

VIEW
116123
I would like to thank VK for the wonderful sales assistance, service and prices. This was my first purchase with you and it won't be my last. I only wish I'd discovered you years ago!
Matthew R.
I had two Grammy wins this year - Ray LaMontagne & Carolina Chocolate Drops. Both made with help from Vintage King!
Ryan F.
In almost 20 years in Pro audio buying, never did I receive a unit so well packed and exactly as described. Works flawlessly. The whole process has been so smooth. I will never hesitate to do business with you guys in the future and will recommend you to everyone I know.
Martin C.
This was my first experience buying something from Vintage King (although I surf the "used" categories on the website frequently!), and, despite being on the other side of the world, I had absolutely no trouble and everything went very smoothly.
Phil T.
The speed of delivery exceeded my expectations! I was VERY pleased that my shipment arrived in time for a scheduled vocal tracking session. The packing insured that my order arrived safely. And the sales staff responded quickly to questions regarding the product.
James P.
Thank you so much! Vintage King has been so fair and easy to work with. I can't thank you enough. It feels good to trust such a hefty purchase to folks who are so helpful and knowledgeable. Vintage King is a sound designers dream store.
Noa L.
You guys have excellent customer service and I am excited about the next upgrade I complete on my fifth recording facility. I've been in the studio business for forty plus years. The salesman I worked with at Vintage King was the best of the best. You all rock!
Robby T.
I would recommend Vintage King to any one looking for top-class gear, unbeatable customer service and the best prices on the map!
Jake D.
My experience with Vintage King was excellent. The order was here fast considering it was out of stock. The sales person had SKB send it to me directly and I couldn't have been more pleased.
Michael D.
From the minute I placed my order I was kept well-informed through each step in your process. Even though I was buying a comparatively modest piece of gear, your attention to detail made me feel like I was purchasing a six-figure mixing desk.
Thomas W.
I am a new customer of yours. You guys provided me the absolute best deals in ordering all the equipment to power my brand new recording studio. Your customer service is amazing and i will always deal with you from here on out.
Rob M.
Thanks for your great service and getting this out today. You guys really are the Kings!
Alan B.
Better than expected! Truly impeccable service. Your team was professional, knowledgeable, provided speedy delivery above and beyond standard. Vintage King Audio is definitely my go to for all of my audio and information needs.
James O.