$ 2,245 .50
You Save: $249.50
Regular: $ 2,495 .00
Hurry! Sale Ends 12/06/2021
No interest if paid in full within 18 months Learn more
Ships directly from Wunder Audio
Note: This item may not be returnable or could require a restocking fee. Contact one of our Audio Consultants for more details. This item ships directly to you from the manufacturer. To ensure that the manufacturer currently has stock, please chat, call or email for the latest availability status. 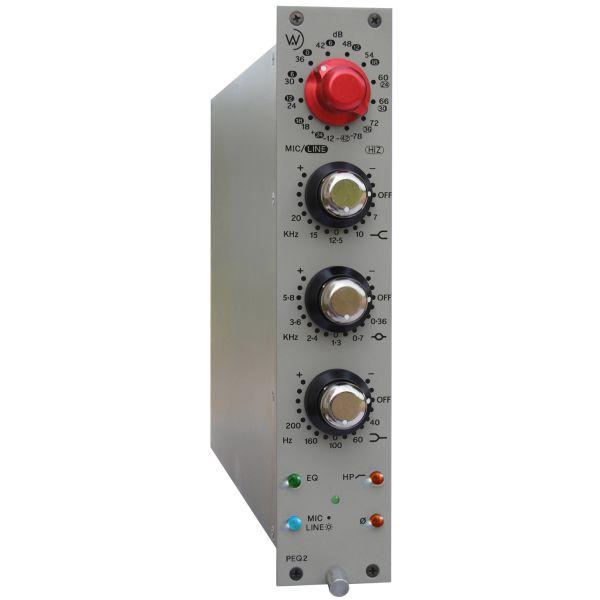 The Wunder Audio PEQ2 is a fully Class-A discrete 1970's-style mic-pre/ equalizer. The design employs proprietary, custom-designed mic, line, and output transformers. It can directly replace the Neve 1073. The 18-way gold plated Amphenol connector will mate with vintage Neve "80 Series" consoles or racks. The similarity to the 1073 stops there!

Compared to a 1073, the PEQ2 has more equalizing power with better lows and more presence in the mids and highs for a sound that lifts the veil off your input signal. The reason for this is simple: the PEQ2 has eight Class-A gain stages where the 1073 has four. The extra gain yields more Class-A headroom resulting in a wider pure path audio. The PEQ2, however, is NOT a 1073 clone. It has its own unique circuit, and over the last four years we have made about 20 modifications in the prototype. The only way to explain the sound is that is it like a 1073 with a deeper low end "that goes all the way to China" and more depth overall in the mids and highs without that phasey boxy sound. The 3db roll-off points are 8.7Hz on the low and 118KHz on the top end.

The EQ is the best we have ever heard, reminiscent of a powerful Pultec, but with more frequencies. The drum sounds you can dial up are invincible, and nothing can make the vocals stand out in a mix like the PEQ2.

There are twice as many amplifier stages in the PEQ2, which provides 60db line in gain compared with the 1073s 30db! This gives you more sonic headroom. The 60db of line in gain also allows for a wide range of instrument/line levels. You can plug a bass guitar, guitar or keyboards directly into the Line Input for a huge, better than any direct box sound. One can also use the Line input as a totally separate microphone input utilizing the large Line transformer. With 42 dB of gain, the Line input stage works great as a 2nd Mic Pre! All the Gain and EQ switches used on the PEQ2 series are custom made by Elma, which were designed for us at their factory in Switzerland.

The custom made (long shaft) potentiometers are Vishay audio-grade, made with conductive plastic for a long life (one million cycles). You can't beat this switch/pot combination. The EQ and Phase switches for the PEQ-22 are by Isostat, giving a vintage touch.

We have recapped so many consoles and tape machines in the past and found the Panasonic FC 105°C electrolytic capacitors to be our favorite so that's what we are incorporating. Vintage-style, rare polystyrene foil capacitors are used throughout. High-current Metal can, not plastic, BC107B and BC109C transistors imported from the UK are used throughout the amplifier stages. These metal transistors are better than their plastic counterparts when used in an Audio circuit. A single circuit board offers a vast sonic improvement over 5 separate boards found in a 1073 eliminating the use of multiple edge-board connectors and redundant wiring.

The hook-up wire is also imported from the UK and is hand assembled to "Military Spec". The enclosures are CAD designed to 1/1000" tolerance and are bright-nickel plated with PEM nut hardware throughout for solid construction. Finally, we CNC mill the custom-designed anodized aluminum knob-set which gives the module character. The boost and cut knobs are solid brass with shiny nickel plating. The knob markers are white plastic dowels embedded in the knob so the white mark will never wear off. We also provide an optional "Vintage Look" faceplate in RAF grey. Additionally one person, our best master craftsman, builds every single PEQ 2 series, from PCB to testing. A PEQ2 series Mic-pre/EQ is one of the best pieces of gear made anywhere in the world, in any given year.

Please fill out the form below and a Vintage King Audio Consultant will contact you with a ship date for the Wunder Audio PEQ2 Microphone Preamp/EQ Module.

Have a better price in mind for the Wunder Audio PEQ2 Microphone Preamp/EQ Module that you've been checking out? We're willing to work on it!Please fill out the form below with your contact information.Once the form is submitted, a Vintage King Audio Consultant will contact you as soon as possible with our best price on this product.