$ 2,049 .00
You Save: $200.00
Regular: $ 2,249 .00
No interest if paid in full within 12 months Learn more
PayPal Credit, Express Checkout and Pay in 4 available.
Ships directly from Waves Audio
Note: This item may not be returnable or could require a restocking fee. Contact one of our Audio Consultants for more details. This item ships directly to you from the manufacturer. To ensure that the manufacturer currently has stock, please chat, call or email for the latest availability status. 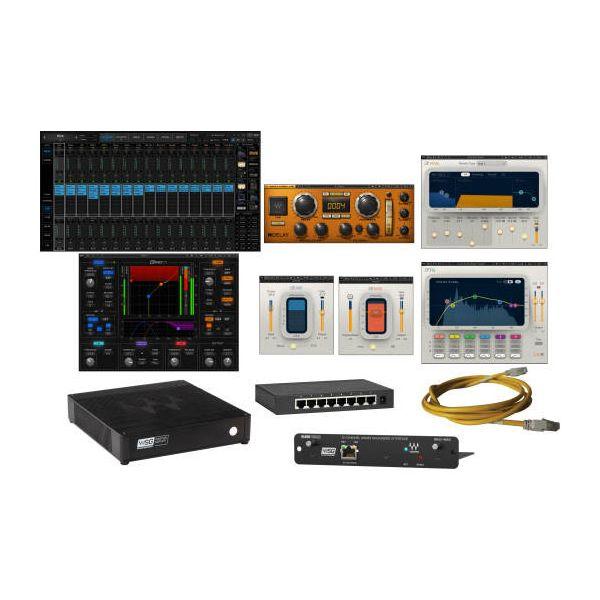 The Waves Proton Server SuperRack Combo is an affordable, complete system for mixing live with SoundGrid plug-ins directly on your X32 or M32 mixer. The DN32-WSG I/O Card is a Waves designed and manufactured product – for technical information please contact Waves. Take your live sound to the next level by connecting your X32 or M32 mixer to the power of SoundGrid plug-in processing via a single Ethernet cable. Run the included EQ, compression, delay, reverb, and bass enhancement plug-ins on your mixer, or choose from hundreds of SoundGrid-compatible plug-ins by Waves and other companies.

The affordable way to run SoundGrid plug-ins – compressors, EQs, limiters, reverbs, delays, feedback elimination tools and more – on your X32 or M32 mixer. With the DN32-WSG I/O card and a SoundGrid DSP server, you can mix with state-of-the-art audio plug-ins by Waves and other companies, allowing you to dramatically improve your live sound. You can also play back and capture multi-track recordings – all in extremely low latency. The DN32-WSG card enables you to connect your digital console to any Waves SoundGrid audio processing server via a single Ethernet cable. It also features clock Sync-over-Ethernet for syncing multiple mixers and performing digital splits. Together with a SoundGrid server and a Mac or PC, the Waves DN32-WSG I/O card gives you more control over your live sound – directly from your X32 or M32 console.

Waves' most affordable DSP server yet, the SoundGrid Proton server takes the load off your computer and gives you more plug-in processing power when mixing in the studio or live.

The half-rack 1U slick aluminum casing fits perfectly in a 1U rack shelf. It can be paired with the Axis Proton Waves-optimized computer. Combine the two with the eMotion LV1 16-stereo-channel mixer to build the ultimate compact live mixing system for a 16-stereo-channel setup. Small enough to fit in your backpack, you can easily take the Proton server with you and supercharge your mixing power anywhere you go.

Designed from the ground up and optimized for speedy operation, SuperRack is a cutting-edge plug-in rack that lets live sound and broadcast engineers run up to 64 stereo racks (multi-channel racks are supported) through multiple instances of Waves’ plug-ins, with near-zero latency (in SoundGrid mode). SuperRack offers endless customization options that make it easy for you to tailor the application to your very own mixing workflow.

SuperRack operates in either Native mode, which handles plug-in processing on the CPU of your Mac/PC, with any ASIO/Core audio interface, or in SoundGrid mode, which handles plug-in processing on an external SoundGrid DSP server to significantly increase plug-in count, minimize latency, and enable the host and I/O devices to be far apart from each other, to accommodate complex setups.

SoundGrid-tested and approved Gigabit Ethernet switch for connecting all the computers, SoundGrid I/Os and SoundGrid servers in your SoundGrid audio network.

Please fill out the form below and a Vintage King Audio Consultant will contact you with a ship date for the Waves Proton Server SuperRack Combo for X32 and M32 Consoles.

Have a better price in mind for the Waves Proton Server SuperRack Combo for X32 and M32 Consoles that you've been checking out? We're willing to work on it!Please fill out the form below with your contact information.Once the form is submitted, a Vintage King Audio Consultant will contact you as soon as possible with our best price on this product.