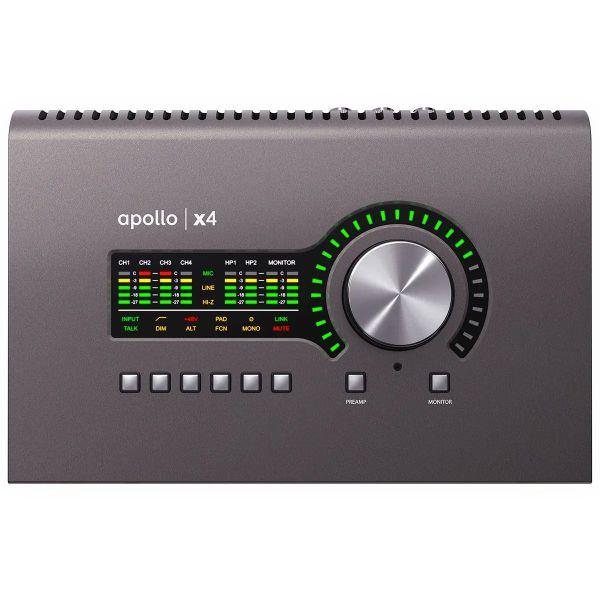 In 2020 Universal Audio introduced the Heritage Edition Series of their acclaimed audio interfaces. These versions include special plug-in bundles featuring 10 premium UAD titles. For those looking for UA's elite-class AD/DA conversion and UAD-2 processing power but without the additional plug-ins (and cost), here is your chance to save! Vintage King has available stock of Universal Audio non-Heritage Edition B-Stock items. Though these versions do not include Heritage Edition bundles, they still include a version of the Realtime Analog Classics bundle, giving you everything you need to get up and running with UAD's renowned plug-ins. Supplies are limited, so order now!

B-Stock, or "open box," items are those that have been indicated as having a minor cosmetic flaw by the manufacturer and as such are being sold at a reduced price. These items often have small cosmetic blemishes in metal work, paint, or fabric that do not affect the functionality of the unit whatsoever. B-Stock items come with all original factory packaging and accessories as well as the full manufacturer’s warranty.

Capture the sound of your favorite analog consoles with Apollo x4’s four Unison-enabled mic preamps. From the subtle warmth of analog tubes to the punchy sound of transistors, the Apollo x4 lets you choose from a wide range of classic consoles, including emulations from Neve, Helios, API, Manley, UA and more. Best of all, Unison preamps let you record in real time with record at near-zero latency. You can even use the front-panel Hi-Z instrument input to capture super-accurate emulations of guitar and bass amps from Fender, Marshall, Ampeg, and more.

Expand your I/O even further with the built-in optical ADAT/SPDIF input and output for an impressive 12 x 18 configuration. Daisy-chain up to four Thunderbolt Apollos and six total UAD-2 devices for limitless possibilities. And if you decide to upgrade to an Apollo X rack-mount unit, you can use Apollo x4 as a desktop monitor control with additional I/O and DSP power.

Please fill out the form below and a Vintage King Audio Consultant will contact you with a ship date for the Universal Audio Apollo x4 Thunderbolt 3 Audio Interface (B-Stock).

Have a better price in mind for the Universal Audio Apollo x4 Thunderbolt 3 Audio Interface (B-Stock) that you've been checking out? We're willing to work on it!Please fill out the form below with your contact information.Once the form is submitted, a Vintage King Audio Consultant will contact you as soon as possible with our best price on this product.