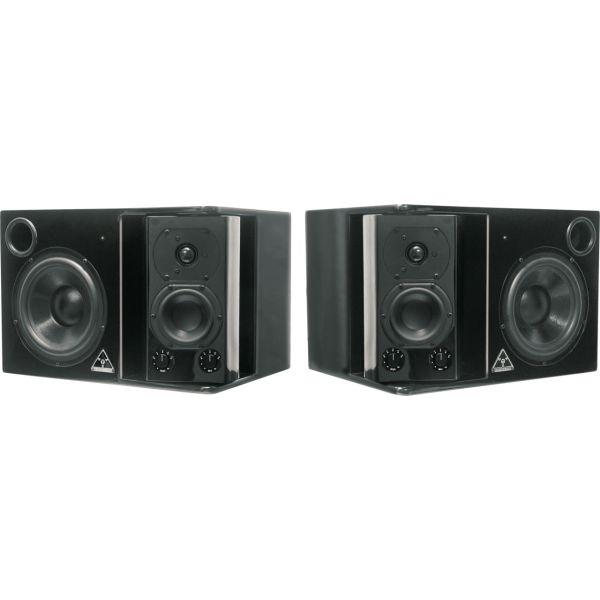 The unique cabinet configuration of the Trident HG3 Close Field Monitoring System is designed to reduce or eliminate many issues found in today's monitor systems.

Some of these include:
Bass Response
The use of a port can extend the usable response of a low frequency speaker, but below resonance, the speaker becomes uncontrolled and will flap wildly in conventional ported systems. The Trident HG3 system eliminated this problem by using a controlled electronic roll-off below the speaker's usable response. Separate subwoofers create additional problems by introducing phase cancellations at crossover, and exciting unwanted room nodes - eliminating the advantages of near field monitoring. Separate sub-woofer placement is a hit or miss proposition, guaranteed to cause problems in poorly treated rooms Through the use of a dual voice coil sub-woofer, in each speaker box, and optimal tuning, the usable response is extended smoothly to almost 30 Hz in a very small enclosure. Each sub-woofer has its own 100 Watt dual MOS amplifier to insure clean, distortion free power. Further, the port is located outside the path of all active speaker components to insure freedom from Doppler distortion at very low frequencies.

Below 90 Hz, the HG3 bass response is essentially omni-directional. From 90 Hz up to the crossover point of 320 Hz, the bass response narrows to about 180 degrees. Above 320 Hz, any large diameter speaker's dispersion narrows and the frequency response becomes ragged and uneven. Not a good thing.

Mid-range Response
The most critical range in any monitor system is the mid-range; that's where the voice resides, the bulk of the guitar's sound, and the overall detail of the music. It's strange that some manufacturers would split the vocal range in the middle, and assign part of the vocal to the woofer, and the other part of the critical vocal range to another speaker. It just doesn't make sense. Part of the vocal (in a typical two-way system) is being modulated by pumping bass, and the other part is bouncing off the ends of the cabinet, creating edge diffractions. The result is smeared mid-range, bad stereo imaging, and poor off axis response. The Trident HG3 uses crossover points set at 320 Hz and 3,500 Hz to eliminate those problems. The unique cabinet design takes care of the rest.

The Cylinder
The mid-range speaker is mounted in an isolated, 6" diameter, damped, cylinder, to eliminate edge diffractions and woofer/cabinet resonance interactions. The cylinder also houses the 1-1/8" silk dome tweeter, its crossover, plus the mid and tweeter level controls. A separate 80 Watt amplifier drives the cylinder mid and treble components.
The unique cylinder design lets the listener position the critical directional components exactly where needed, regardless of the distance between cabinets, without the need to move the main cabinet into a precarious balance position. The electrical connections are made through the ends of the cylinder; the cylinder can be turned in any direction, continuously, without damage. In fact, rotating the cylinder simply cleans the contacts.

The Amplifier
The Trident HG3 power amplifier section is made up of three identical 100 Watt MOS amplifier modules, noted for their low distortion, wide band width, and low noise levels. A unique "muting circuit" prevents thumps at turn on/off. Two modules are used to power the woofer section, and a separate module is used for the mids and highs.
Overall Distortion is typically around 0.05% and the noise level is typically below -104 dB. A unique warning LED is built into the front panel of the Trident HG3 that changes from green to red as you begin to approach audible distortion levels (above 1%). Three sets of inputs allow for both Balanced (XLR and TRS) and unbalanced (TS and RCA) connections. The dual-color LED on the front of the cabinet shows both power on (Green) and distortion (Red).

Please fill out the form below and a Vintage King Audio Consultant will contact you with a ship date for the Trident HG3 Studio Monitor System - Pair.

Have a better price in mind for the Trident HG3 Studio Monitor System - Pair that you've been checking out? We're willing to work on it!Please fill out the form below with your contact information.Once the form is submitted, a Vintage King Audio Consultant will contact you as soon as possible with our best price on this product.

VIEW
21022
I would like to thank VK for the wonderful sales assistance, service and prices. This was my first purchase with you and it won't be my last. I only wish I'd discovered you years ago!
Matthew R.
I had two Grammy wins this year - Ray LaMontagne & Carolina Chocolate Drops. Both made with help from Vintage King!
Ryan F.
In almost 20 years in Pro audio buying, never did I receive a unit so well packed and exactly as described. Works flawlessly. The whole process has been so smooth. I will never hesitate to do business with you guys in the future and will recommend you to everyone I know.
Martin C.
This was my first experience buying something from Vintage King (although I surf the "used" categories on the website frequently!), and, despite being on the other side of the world, I had absolutely no trouble and everything went very smoothly.
Phil T.
The speed of delivery exceeded my expectations! I was VERY pleased that my shipment arrived in time for a scheduled vocal tracking session. The packing insured that my order arrived safely. And the sales staff responded quickly to questions regarding the product.
James P.
Thank you so much! Vintage King has been so fair and easy to work with. I can't thank you enough. It feels good to trust such a hefty purchase to folks who are so helpful and knowledgeable. Vintage King is a sound designers dream store.
Noa L.
You guys have excellent customer service and I am excited about the next upgrade I complete on my fifth recording facility. I've been in the studio business for forty plus years. The salesman I worked with at Vintage King was the best of the best. You all rock!
Robby T.
I would recommend Vintage King to any one looking for top-class gear, unbeatable customer service and the best prices on the map!
Jake D.
My experience with Vintage King was excellent. The order was here fast considering it was out of stock. The sales person had SKB send it to me directly and I couldn't have been more pleased.
Michael D.
From the minute I placed my order I was kept well-informed through each step in your process. Even though I was buying a comparatively modest piece of gear, your attention to detail made me feel like I was purchasing a six-figure mixing desk.
Thomas W.
I am a new customer of yours. You guys provided me the absolute best deals in ordering all the equipment to power my brand new recording studio. Your customer service is amazing and i will always deal with you from here on out.
Rob M.
Thanks for your great service and getting this out today. You guys really are the Kings!
Alan B.
Better than expected! Truly impeccable service. Your team was professional, knowledgeable, provided speedy delivery above and beyond standard. Vintage King Audio is definitely my go to for all of my audio and information needs.
James O.