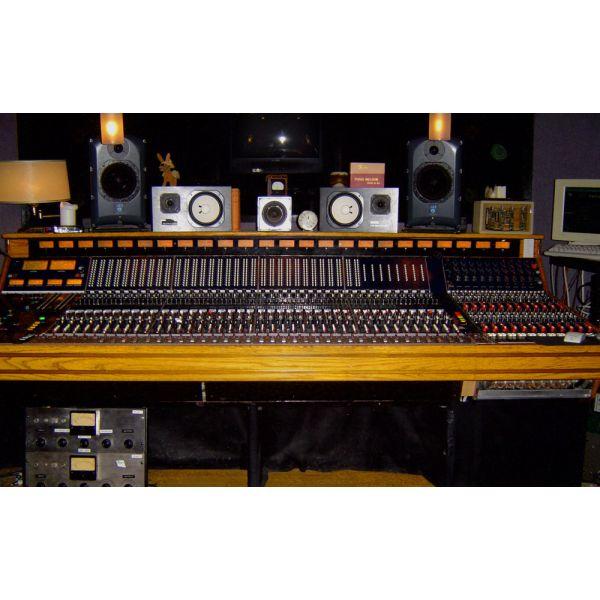 This fully discrete, class A, hand wired console is a split design, with 40 inputs, 24 busses, and 24 monitor returns, totaling 64 inputs on mixdown, updated with 40 channels of Neve Flying Faders, and has a grand total of 3,746 knobs, switches, buttons and faders!

A large number of the electrolytic capacitors in the audio path have been replaced on an as-needed basis with WIMA poly caps. Input gain switches have also been replaced on an as-needed basis and extras are included, some of which have already been wired up with the proper resistor network. Switch assemblies and EQ faders on all but 7 of the modules have been replaced. The remaining switch assemblies, faders, and bracket hardware are available to complete the desk.

Built by hand in the mid 70s in London, England, Trident’s A-Range #13 was designed by Malcom Toft, Barry Porter, and Producer Roy Thomas Baker (Queen, The Cars, Devo). Originally intending on making only 12 A-Ranges, Trident was forced to follow through with their promise of a 13th, or face a hefty lawsuit from Cherokee Sound in Los Angeles, California.

Over the years, the Trident A-Range has become one of the most well-respected, indeed legendary, vintage recording consoles in the world. This particular console was known as 'Old Blue' (since #13 is the only A-Range powder-coated in dark blue). 'Old Blue' was in heavy use at Cherokee Studios in Los Angeles, from the years of 1975-1983, and according to studio owner Bruce Robb it was used by some of world's greatest recording artists, on some of the finest recordings of all time. To name but a few:

After making the move to Smart Studio in Madison, Butch Vig and Steve Marker put 'Old Blue' to good use, recording countless Midwest bands and some of the most popular acts of the last decade, including:

We've been buying, selling and restoring the world’s best consoles since 1993

Shopping for a recording console can be an intimidating process. You can spend countless hours online searching for answers only to end up with more questions than when you started. That's why we’ve created our one-of-a-kind shopping experience to help you purchase the console that is exactly right for you and your studio.

Finding the perfect console means being connected, and for over 20 years, we’ve been one of the biggest players in the worldwide audio marketplace. We’ve helped thousands of customers complete the console buying process, while also helping to facilitate brokered sales, gear trade-ins and purchasing classic desks for refurbishment.

Each of our premium serviced consoles has passed through a rigorous multi-point inspection and meticulous testing to ensure the result is a world-class restoration. Upon completion, your console will be expertly crated and shipped to your studio, where our highly skilled technical experts can lead a worry-free integration.

No matter whether you’re interested in a vintage piece or the latest releases, our team of experts can answer even the toughest questions. From servicing and shipping consoles to creating custom furniture, patch bays and turnkey packages, we’ve been involved in every aspect of the industry. We work tirelessly to provide the best selection, service and support anywhere to help our customers find the console of their dreams. Want to see what we can do for you? Talk to one of our console experts by calling 888.653.1184 or you can email us.

Please fill out the form below and a Vintage King Audio Consultant will contact you with a ship date for the Trident A-Range Console #13 of 13 (Vintage).

Have a better price in mind for the Trident A-Range Console #13 of 13 (Vintage) that you've been checking out? We're willing to work on it!Please fill out the form below with your contact information.Once the form is submitted, a Vintage King Audio Consultant will contact you as soon as possible with our best price on this product.

VIEW
16116
I would like to thank VK for the wonderful sales assistance, service and prices. This was my first purchase with you and it won't be my last. I only wish I'd discovered you years ago!
Matthew R.
I had two Grammy wins this year - Ray LaMontagne & Carolina Chocolate Drops. Both made with help from Vintage King!
Ryan F.
In almost 20 years in Pro audio buying, never did I receive a unit so well packed and exactly as described. Works flawlessly. The whole process has been so smooth. I will never hesitate to do business with you guys in the future and will recommend you to everyone I know.
Martin C.
This was my first experience buying something from Vintage King (although I surf the "used" categories on the website frequently!), and, despite being on the other side of the world, I had absolutely no trouble and everything went very smoothly.
Phil T.
The speed of delivery exceeded my expectations! I was VERY pleased that my shipment arrived in time for a scheduled vocal tracking session. The packing insured that my order arrived safely. And the sales staff responded quickly to questions regarding the product.
James P.
Thank you so much! Vintage King has been so fair and easy to work with. I can't thank you enough. It feels good to trust such a hefty purchase to folks who are so helpful and knowledgeable. Vintage King is a sound designers dream store.
Noa L.
You guys have excellent customer service and I am excited about the next upgrade I complete on my fifth recording facility. I've been in the studio business for forty plus years. The salesman I worked with at Vintage King was the best of the best. You all rock!
Robby T.
I would recommend Vintage King to any one looking for top-class gear, unbeatable customer service and the best prices on the map!
Jake D.
My experience with Vintage King was excellent. The order was here fast considering it was out of stock. The sales person had SKB send it to me directly and I couldn't have been more pleased.
Michael D.
From the minute I placed my order I was kept well-informed through each step in your process. Even though I was buying a comparatively modest piece of gear, your attention to detail made me feel like I was purchasing a six-figure mixing desk.
Thomas W.
I am a new customer of yours. You guys provided me the absolute best deals in ordering all the equipment to power my brand new recording studio. Your customer service is amazing and i will always deal with you from here on out.
Rob M.
Thanks for your great service and getting this out today. You guys really are the Kings!
Alan B.
Better than expected! Truly impeccable service. Your team was professional, knowledgeable, provided speedy delivery above and beyond standard. Vintage King Audio is definitely my go to for all of my audio and information needs.
James O.