$ 399 .99
Your Savings: $ 54 .98 Msrp: $ 454 .97
or $17/month for 24 months 0% interest for 24 months. 24 equal monthly payments required. Learn more
Ships directly from Triad-Orbit
Note: This item may not be returnable or could require a restocking fee. Contact one of our Audio Consultants for more details. This item ships directly to you from the manufacturer. To ensure that the manufacturer currently has stock, please chat, call or email for the latest availability status. 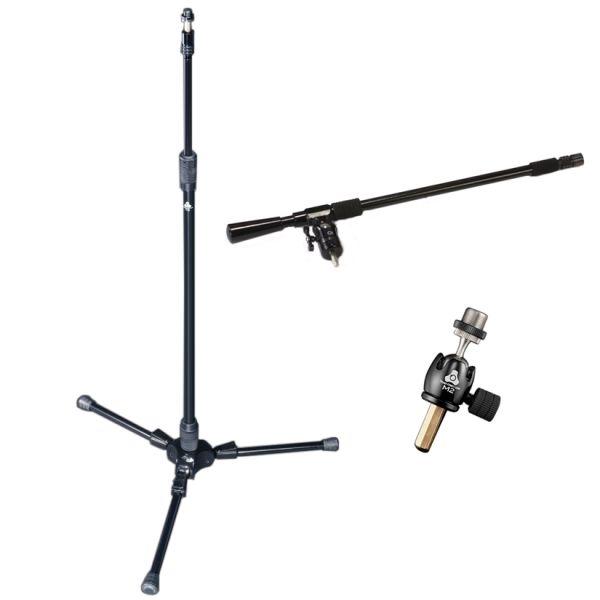 The Triad-Orbit T2/O1/M2 is a standard tripod stand system including one T2 tripod, one O1 boom arm, and M2 orbital mic adaptor.

Each leg of a TRIAD base has four ratcheted positions that provide a pitch of up to 65 degrees to accommodate 'boom-less' front lines, uneven surfaces and stacking. A foot-actuated latch on each leg provides hands-free adjustability.

The exclusive IO Quick-Change Coupler is standard equipment on all TRIAD Stands. IO effortlessly captures booms and mics with ease and assurance. ‘On-the-fly’ hardware swaps are now a reality, replacing the tedious task of threading booms and mic clips on and off.

The ORBIT O1 Orbital Boom is—in a word—revolutionary. With its proprietary ball swivel and robust build quality, surgically precise mic placement is now attainable in every recording and live performance scenario, regardless of the venue.

ORBIT 1 is equally at home when static mic placement is called for, thanks to its GLIDE PATH™ swivel housing that provides a controlled traditional boom arm motion.

The ORBIT 1 Boom has an unparalleled range-of-motion by design. When disengaged, the O1 swivel housing exhibits a full 360° degrees of horizontal rotation. Add to that the 360°x 220° rotational axis of the ball swivel mechanism, and you have a recording and live sound tool with unrivaled precision and versatility.

Tired of lost and sheared tensioning knobs sidelining booms in your stand inventory? ORBIT 1 Booms utilize industrial-grade clutches in lieu of knobs and thumbscrews to secure all points of adjustment on the shafts. The knurled metal clutch barrels are coated to provide a comfortable ergonomic grip that yields more torque. With no protruding parts, ORBIT 1 Booms transport and store with total reliability.

Time is of the essence; whether it’s in the studio between takes, or on stage between acts. For the first time effortless, instantaneous, on-the-fly mic and boom changes are finally a reality. And the precision engineering and machining of the IO coupling mechanism insures a solid, secure connection every time with every microphone; be it a domestic handheld or an esoteric large diaphragm.

All MICRO Orbital Mic Adaptors are IO-equipped, giving them quick-change compatibility with TRIAD Mic Stands and ORBIT Booms. Rapid mic changes between recording sessions and live sets are a snap, thanks to the integrated IO quick-change platform of TRIAD-ORBIT Advanced Mic Stand Systems.

Please fill out the form below and a Vintage King Audio Consultant will contact you with a ship date for the Triad-Orbit T2/O1/M2.

Have a better price in mind for the Triad-Orbit T2/O1/M2 that you've been checking out? We're willing to work on it!Please fill out the form below with your contact information.Once the form is submitted, a Vintage King Audio Consultant will contact you as soon as possible with our best price on this product.