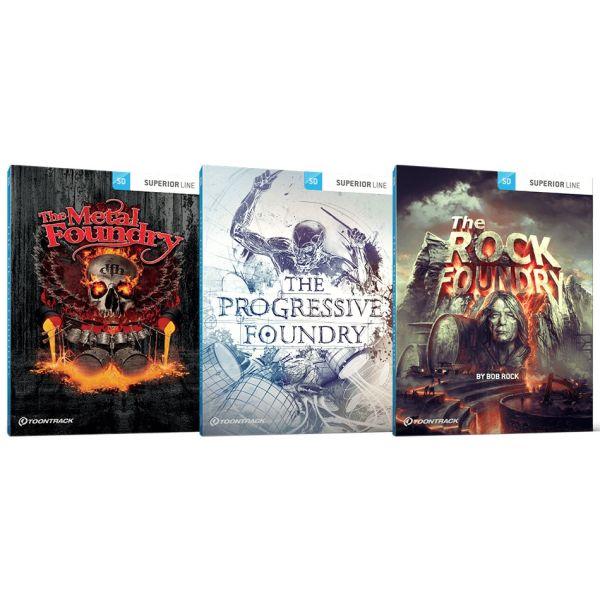 The Toontrack The Foundry SDX Bundle includes three individual SDXs, all from the hugely popular ‘Foundry’ series; The Metal Foundry, The Progressive Foundry and The Rock Foundry. In total, you get 19 kits and in excess of 163 GB of raw, unprocessed drum sounds recorded in three world-class studios in different parts of the world.

With three fundamentally different drum rooms and a wide range of instrument choices, this collection is the ultimate starting point for transparent, broad-scope drum production in Superior Drummer 3.

The first and now classic title in the ‘Foundry’ suite was recorded and produced at the Atlantis Studios in Stockholm, Sweden, by Meshuggah drummer Tomas Haake together with engineers Mattias Eklund (Toontrack), Fredrik Thordendal (Meshuggah) and Daniel Bergstrand (Dugout Studio). With all thinkable dimensions, depths, widths, brands and materials of instruments, this collection provides a uniquely broad palette of sound.

This SDX was recorded at the renowned Sing Sing Recording Studios in Melbourne, Australia, by engineer/producer Forrester Savell and drummer Steve Judd (Karnivool). With drums scoured from all four corners of Australia, all captured with top tier microphones and rare outboard, this SDX gives you the best of vintage and modern recorded in a perfectly crafted room.

This SDX was recorded by engineer/producer Bob Rock at The Warehouse in Vancouver, BC. In addition to the seven individual kits, a large selection of extra snares, kicks and cymbals are provided, making The Rock Foundry SDX an incredibly versatile source of raw sound material – all captured in the large, reverberant hall of The Warehouse.

Easy the best bundle for Superior Drummer/metal druma... the Dev Kit in Metal Foundry is my go to kit!

Please fill out the form below and a Vintage King Audio Consultant will contact you with a ship date for the Toontrack The Foundry SDX Bundle - Electronic Delivery.

Have a better price in mind for the Toontrack The Foundry SDX Bundle - Electronic Delivery that you've been checking out? We're willing to work on it!Please fill out the form below with your contact information.Once the form is submitted, a Vintage King Audio Consultant will contact you as soon as possible with our best price on this product.