Drum sample engine combining the creative power of sounds and ambiances, and an extensive set of features
MFR# 1365-1054
Shop All Toontrack Plugins
Skip to the end of the images gallery 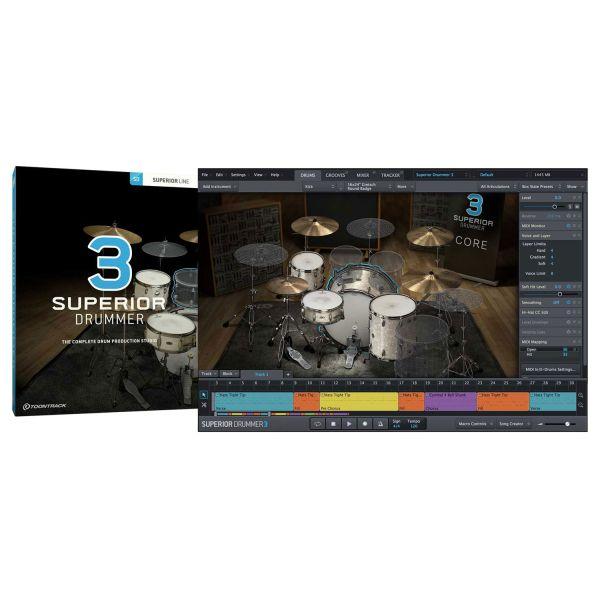 The idea with Toontrack Superior Drummer 3 is to let you step into a virtual studio with the best possible raw material and mix options at your disposal to create drum sounds in an environment where only your imagination sets the limits. Combining the creative power of the sounds, the ambiences and the extensive set of features, Superior Drummer 3 is more than just a drum sampler – it’s a bottomless well of creativity. It bridges the gap between acoustic and electronic and lets you venture off into completely new sonic landscapes. This is the definitive tool for percussive sound design.

Immense and immersive, captured with layers of technology

The Superior Drummer 3 core sound library was recorded by award-winning engineer George Massenburg at probably the world’s most quiet and ideal location for sampling, the Galaxy Studios in Belgium. The library boasts in excess of 230 GB of raw sound material captured in extreme detail.

In addition to close microphones and several ambience positions, the Superior Drummer 3 setup also includes an eleven room microphones set up in a surround configuration, for use in anything from stereo to 5.1, 9.1 and all the way up to 11.1 systems. In combination with the large selection of extra instruments added for stacking and sound design purposes, the sounds of Superior Drummer 3 give you an incomparable palette of options to craft drum tones beyond your wildest imagination.

The Superior Drummer 3 core sound library was recorded at Galaxy Studios in Belgium. With its 330 square meter room and eight meter ceiling height, it was the ideal location for capturing immersive audio of the utmost quality. In addition, the entire studio complex is built on springs to ensure that the outside interference is literally nonexistent. In fact, with only 14 dBA of environmental noise, the main hall at Galaxy Studio is the most quiet recording space of this size in the world.

Perfect acoustics, balanced reverberation and second-to-none recording technology. Superior Drummer 3 called for a superior studio. We’d dare to say that this is the most nuanced and candidly captured sample library on the market.

Please fill out the form below and a Vintage King Audio Consultant will contact you with a ship date for the Toontrack Superior Drummer 3.0 - Electronic Delivery.

Have a better price in mind for the Toontrack Superior Drummer 3.0 - Electronic Delivery that you've been checking out? We're willing to work on it!Please fill out the form below with your contact information.Once the form is submitted, a Vintage King Audio Consultant will contact you as soon as possible with our best price on this product.