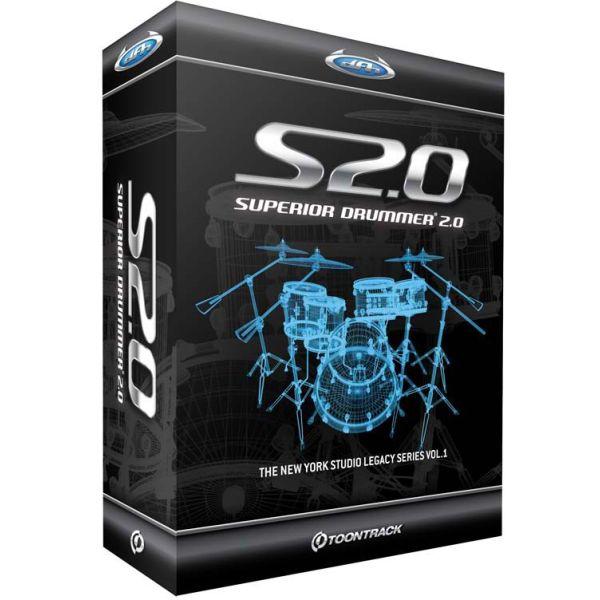 Toontrack Superior Drummer 2.0 gives you incredible drum control while maintaining an intuitive interface that's reminiscent of EZdrummer. They've completely overhauled the dfh-Superior engine so it's optimized for use with electronic drum kits, makes even more effective use of sample layers, and loads much faster than before. Plus, the sounds are top-notch - so good, in fact, that Toontrack created the brand new Superior Drummer 2.0 engine expressly to showcase them, instead of just releasing them as an expansion pack. Whether you're stepping up from EZ, or you're craving a professional, and ultra-flexible virtual drummer for your sessions, you won't want to miss Toontrack Superior Drummer 2.0.

Top-notch drum sounds
At the request of Pat Thrall (Glenn Hughs, Black Crowes, Beyonce), the sounds in Superior Drummer 2.0 were recorded in 2005 at the soon-to-be-closing Hit Factory studio in New York. For the session, Pat invited experienced producer and engineer, Neil Dorfsman (Kiss, Bruce Springsteen, Dire Straits, Sting), who, in turn, brought along renowned live and session drummer Nir Z whose credits include acts such as Joss Stone, Genesis, and Chris Cornell. Nir Z brought along his GMS drums, and Pat, Neil, and the Toontrack production team went to work at Hit Factory, Avatar Studios, and Allaire Studios, originally slating the recordings as an expansion pack for dfh Superior. Yet, after hearing them, they all decided that the sounds were too important and too special to be just another expansion pack - so they went to work creating Superior Drummer 2.0 so that musicians and engineers the world over could creatively take advantge of them. Superior Drummer 2.0 has since been dubbed: "The New York Studio Legacy Series."

Enhanced features, intuitive user interface
Toontrack wanted to make sure that Superior Drummer 2.0 was not only appealing for the most demanding, deep-function-seeking users, but that it also maintained an intuitive user interface to save users creative time and energy. Such new enhancements include a new MIDI engine and arranger, as well as "X-pads" that let you load instruments from any Toontrack library to add positions or to double instruments on the position nof your choice. Improved loading times, more effective use of sample layers, and seamless use with electronic drums are all ehanced features - plus, you'll enjoy the ability to read and combine all Superior and EZdrummer sound libraries.

Built-in Effects
Not only does Superior Drummer 2.0 give you top-notch sounds, you also have an all-new internal mixer that boasts bussing capabilities, as well as built-in effects made by premium UK software developer, Sonalksis. Such effects include a 5-band EQ, high pass, low pass, gate, compressor, and transient filters. With Superior Drummer 2.0, you have all the tools you need to create incredible, fully-realized drum tracks.

Please fill out the form below and a Vintage King Audio Consultant will contact you with a ship date for the Toontrack Superior Drummer 2.0.

Have a better price in mind for the Toontrack Superior Drummer 2.0 that you've been checking out? We're willing to work on it!Please fill out the form below with your contact information.Once the form is submitted, a Vintage King Audio Consultant will contact you as soon as possible with our best price on this product.