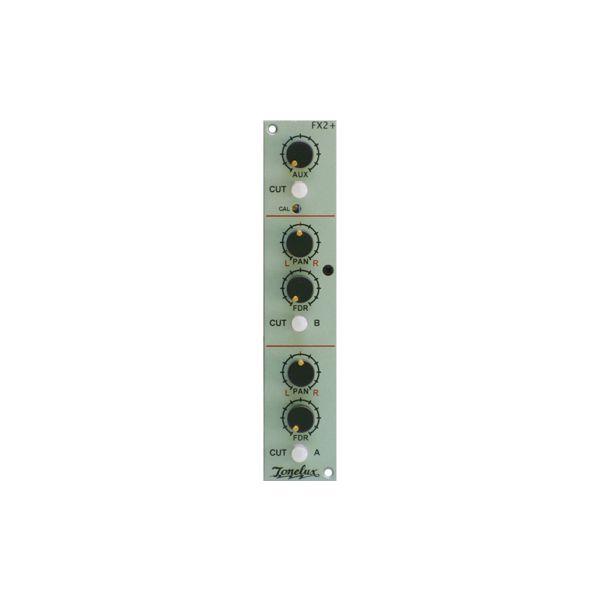 The Tonelux FX2+ Mixer is a DUAL stereo line mixer with a simple pair of level controls and a pair of panners.


The PAN control is a standard stereo pan circuit with a center detent. The FX2 has a unique MUTE circuit that when pressed, the LED turns RED, but when the module is ON, the LED serves as a level presence indicator, illuminating green to show signal presence. This is very useful in live recording when you need to know quickly if a channel has signal or which has the loudest signal on it. It is also perfect for identifying which channel has the Kick and which has the Snare.

The FX2+ "AUX MSTR" is an OPTIONAL send master, which can be used in place of the SM1 or SM2 bus master when rack space is critical. It allows the rack to be filled with a full set of 16 modules, giving you 32 channels, including the masters, ALL IN ONE 3U RACK.

The rear panel feature connector provides for an external fader for the send master option on the FX2+.

The FX2 can be used by it self as a inexpensive dual stereo mixer for DAW or LIVE use when a simple stereo bus is all that is required.

When used with the MX2 series, the addition of FOUR FX2 modules will give you 8 returns and the masters for the FOUR sends on the MX2, saving you the space of having FOUR SM1 master modules.

The FX2 can also be used as an additional set of sends, fed from the direct output of the MX2, as the outputs of each panner can be internally set to feed any of the 16 available busses in the VRACK, allowing up to EIGHT sends from each MX2, including the onboard set of FOUR sends.

This module, when used as a simple external summing module, will bring the cost of a DAW external mixing system down considerably.

Please fill out the form below and a Vintage King Audio Consultant will contact you with a ship date for the Tonelux FX2+ Module.

Have a better price in mind for the Tonelux FX2+ Module that you've been checking out? We're willing to work on it!Please fill out the form below with your contact information.Once the form is submitted, a Vintage King Audio Consultant will contact you as soon as possible with our best price on this product.